Gold is poised to end 2015 with its third-consecutive year of losses, already down 15% so far this year. The yellow metal extended its downward trajectory, with markets adopting the â€˜Sell on Ralliesâ€™ strategy almost through 2015 expectant of the US Federal Reserveâ€™s (Fed) efforts towards policy normalization and thus, end an era of low-interest rate regime.

Gold prices peaked around $ 1307/ oz in January this year after the Swiss National Bank abandoned the Swiss franc-euro peg and the European Central Bank (ECB) announced a full-blown QE program in a bid to combat lower growth and inflation in the Euroland. Subsequently, the bullion fell to $ 1150 by the end of the first quarter, only to consolidate the previous drop in Q2 before the next leg lower. The yellow metal found some support from Greece default issues during the June quarter, although failed to sustain the recovery and eventually fell to $ 1080 in July on increased bets of a Fed rate hike in September. However, the recovery picked-up pace in the Q3 as the Chinese yuan devaluation shocker boosted the safe-haven bids for gold against the backdrop of China-led uncertainties and the resulting global equities sell-off. While the surprisingly dovish Fed at its Sept FOMC meeting poured cold-water on expectations of a rate lift-off in 2015, also lending support to the non-interest bearing gold.

Heading into the crucial Q4, the recovery lost steam just below 1190 levels and the prices dropped sharply after the stellar US jobs report in the last two months of the year, which suggested solid improvement in the US labor market and sealed in a Dec Fed rate rise deal. The spot price dropped to the lowest levels since Feb 2010 at $ 1046.10 on Dec 3 in anticipation of a Fed lift-off and on the back of an unusually hawkish ECB decision. And, finally the historic Fed rate hike was announced on Dec 16, with the US central bank raising the target range for the Fed funds rate by 25bps to 0.25%-0.50% for the first time in more than nine years. Gold prices now attempt a minor-recovery from multi-year lows and trade around $ 1070 post-FOMC as the US dollar still remains underpinned on the back of year-end flows.

Heading towards 2016, gold prices hover near five-year lows as the Fed rate hike outlook is expected to remain the key theme next year. The Fedâ€™s Dots chart pointed towards four hikes in 2016, accounting for 100 bps rise in the interest rates. While out of the US, most other global central banks are looking to extend their ultra-loose monetary policy and resort to further currency debasement in order to spur economic growth and remain competitive, which could emerge gold supportive.

Hence, the year ahead for gold appears to be split into two halves, with the first half dominated by further US rate increases and resulting USD strength weighing on the bullion. While in the H2 2016, gold prices could see a solid recovery on the back of pick-up in demand and amid a world of cheap central bank liquidity.

Gold Technicals: Watch out for a reversal from cluster support
Monthly Chart

Gold witnessed a bearish break from the falling wedge formation in July 2015, and subsequently fell as low as $ 1076.77. The prices bottomed at the last and attempted a recovery towards 1200 levels, before having faltered at $ 1191.53. Gold resumed its downward momentum thereon and dropped to fresh five-year lows near $ 1050, with the pattern target at around $ 900, still in sight.

As observed in the above chart, a strong cluster support lies between $ 885-$ 945 zone, where the long-term downside channel support, Fib confluence (1999-2011 parabolic rise & Oct 2008-Sept 2011 rally) and the falling wedge target coincide. Hence, this confluence zone is expected to emerge a key reversal point in 2016. A failure to resist the last, the prices could drop sharply to the next support at $ 700, personally which doesnâ€™t seem likely going forward.

If the yellow metal manages to hold the key cluster support, we could see a sharp rise in the prices back towards 1085 levels, where the Fib 50% support-turned resistance (blue retracement from 1999 to all-time high in 2011) would act as a strong barrier. A break above which the prices could head higher for a test of $ 1150/1154 â€“ psychological levels and also the key Fib 61.80% retracement of Oct 2008- Sept 2011 rally. Further upside from here is seen at the falling wedge resistance (light blue line) located at $ 1235. Bulls will make solid attempt towards 2015 highs reached ahead of 1300 mark, on a breach of 1235 levels.

As portrayed in the 3-box reversal chart below, the trend for spot gold price comes dictated by a bearish 45Âº line. This market has remained in a bearish tone since the 1920.00 major high established back in 2011 and since then the few attempts to build a bullish 45Âº line have been of short duration. 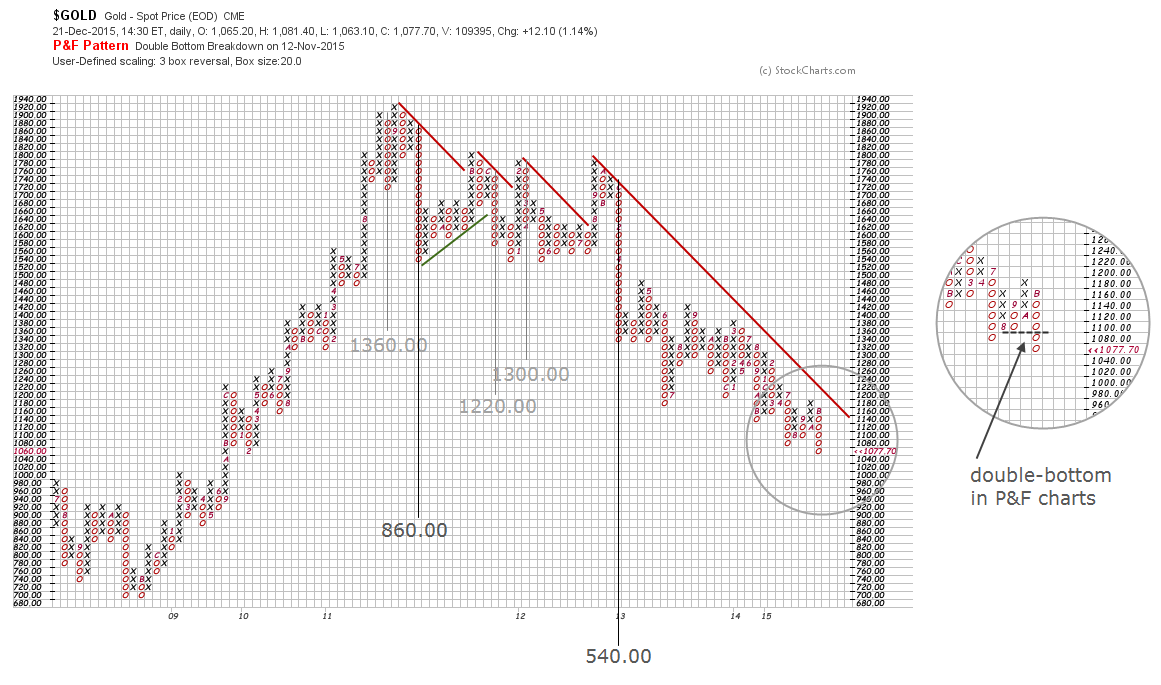 We can regard this bearish development as a temporary reaction within a secular bull market trend. From this long-term perspective, only an annual closing below the lows of 680.00 -the price where the impressive 2009-2011 bull run emerged- would signal a change in the long-term trend.

860.00 U.S. dollar per ounce is one of the vertical counts 3-box charts can offer right now, well below the 680.00 support and therefore achievable. The caveat in this count is the long time it took to be activated which accordingly to P&F charting should happen within the same pattern. As a side note, the 200-month SMA on the regular charts is right now at 820.00 and ascending, ready to act as barrier in a downward acceleration.

The next vertical count, established at the beginning of 2013 and activated the same year in June, targets 540.00. As long as the 45Âº line is not violated I would not rule out a crash-like spike to that level with a yearly close already above.

The short-term view, still on the same chart is bearish despite current rally attempts. A break of the 1190 with a double-top breakout would be the only threat to the trend line and signal to cut shorts. 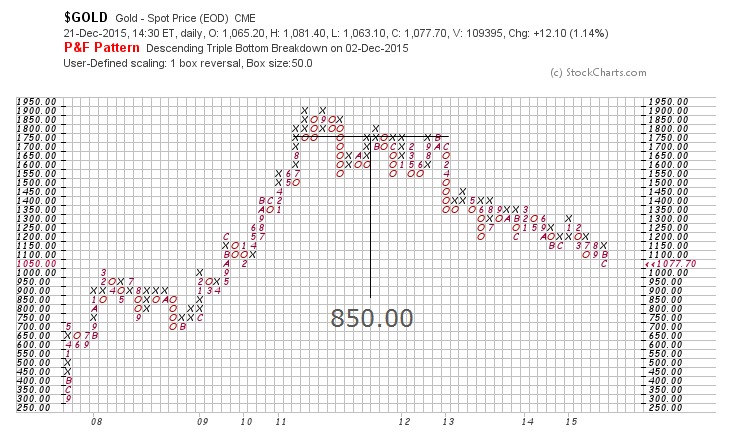 The 1-box reversal point and figurechart reveals nearly the same target level at 850.00 from thehorizontal count formed during the 2011/12 topping formation.