Skip to main content
TRENDING: EURUSD| GBPUSD| USDJPY| USDCAD| AUDUSD| Gold price
TRENDING: EURUSD| GBPUSD| USDJPY| USDCAD| AUDUSD| Gold price
;
The Bank of Japan shook the markets last Friday by announcing a change in its stimulus program. The movement was hardly a surprise in the fact, given that investors have been largely speculating with an extension of the local QE, but it was a surprise in the timing, as no one was expecting Kuroda to made announcements one day after the FED pulled the trigger on its first rate hike.

BOJ's head later said that â€œthese measures are not a response to downside risks for prices or the economyâ€, adding that â€œthis is not additional easingâ€, after announcing an extra Y300B purchases of equities a year. The Bank will start buying government bonds with a remaining maturity of up to 12 years and will accept more risky assets.

When Shinzo Abe launched its ambitious "Abenomics" he was expecting inflation to reach its 2% target in 2-3 years. He never expected inflation to fall below 1.0% neither the latest three-month in-a-row decline to October. The core consumer price index, which excludes fresh food, fell 0.1% from a year earlier. Excluding energy prices and food prices actually rose 0.7% on year, though that was lower than the 0.9% rise in September.

Anyway, and as the ECB, the latest BOJ's decision just widens the policy divergence between Japan and the US. And while the consecutive announcements have resulted in a decline in the USD/JPY as the US announced the softer tightening possible, and the second surprised with more stimulus, the fact is that in the long run there's little supporting further JPY appreciation.

Critical levels to watch in the USD/JPY

The pair has been on a wild ride until the beginning of 2015, when it finally halted its 3-year bullish run at 125.81, past June monthly high. The pair has been always the most sensitive to US data, with the JPY being particularly vulnerable to US employment figures and, of course, Central Bank decisions. The weekly chart shows that the price is pressuring the base of a triangle, although the line in the sand for the long term bullish trend is the 115.50/116.00 price zone, as only below the level the pair will turn bearish. 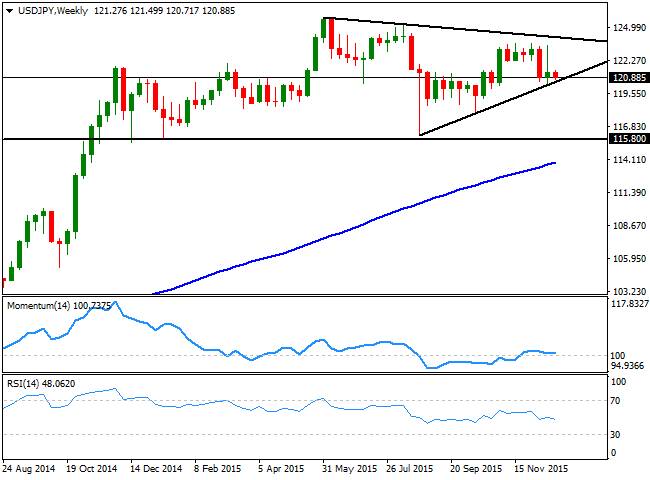 The latest technical developments suggest the pair can extend its downward corrective move and test the mentioned line in the sand, where the market will decide whether the pair can run to fresh highs, of plummet before 110.00 during 2016. In the monthly chartthe technical indicators head sharply lower from overbought readings but remain well into positive territory. In the weekly chart, however, the technical outlook is neutral, with the indicators flat around their mid-lines. At this point the pair needs to run up to the year high around 125.80 to recover its bullish trend, while if somehow the rally extends beyond this last the next probable bullish target comes at 127.60, April 2002 monthly low. Seems unlikely the JPY will continue weakening into March next year, when some yen strength could be expected by the end of the Japanese fiscal year. Nevertheless and after that, the next logical target on dollar strength comes at the 130.00 psychological figure.

The downward potential will increase if the pair breaks steadily below 119.30, the main support for the upcoming months, eyeing then the mentioned 115.50/116.00 region. Further falls however are not yet likely and in fact, given that the dollar should lead the way during 2016, any decline towards the level should be consider a long term buying opportunity.

The bearish 45Âº line was broken by a bear trap pattern, in this case a bottom double sell signal, which has been reversed into a double-top and then triple-top buy signal. The whole affair let the new bullish objective line dictate the trend which is now bullish, valid until broken by a double or triple bottom.

The 3-box reversal chart enable for a vertical count which has been plotted on the chart. 131.00 is the next target for this currency pair, short of the 2002 highs. 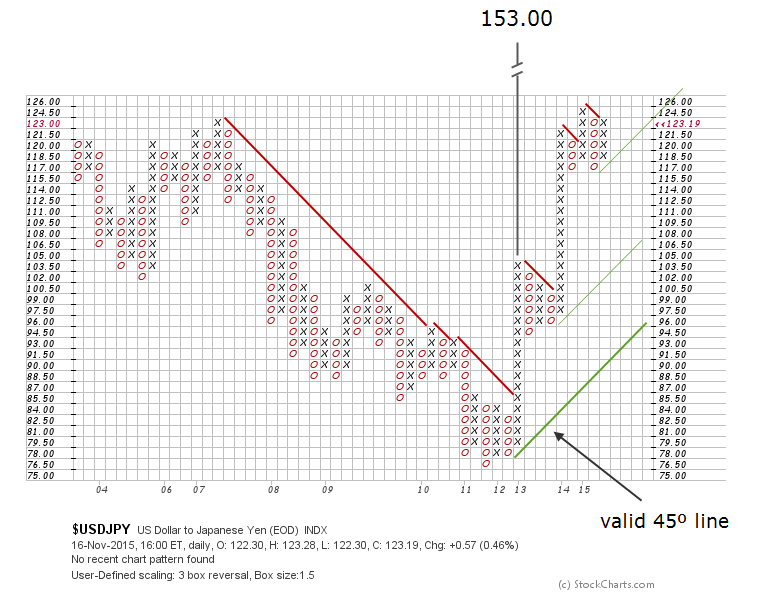 Thereafter, trying to find scope for the legacy 1998 spike highs maintaining a 3-box granulation, I come up repeatedly with an 150.00+ count. The below chart depicts just one of these vertical calculations using a 150 pip box size. 153.00 Japanese yen per US dollar is the long-term target to have in mind for next year.

Note the successive internal lines (in thin green) defending the bullish stance of this market. The eventual break of the first of these lines would not change the trend direction, but rather alert of a correction towards the next one. 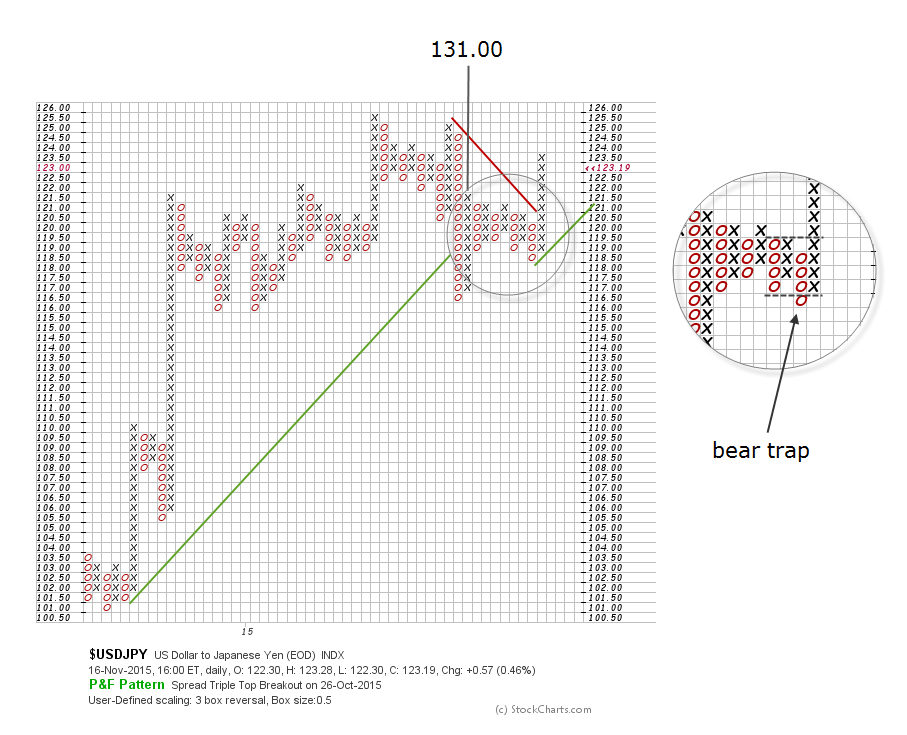 Read also other related articles about what 2016 could bring for the markets: