2015 has been indeed the year of the Central Banks, particularly when referring to the EUR/USD pair. It was right at the beginning of the year when both Central Banks' leaders promised measures in completely opposite directions: the US Federal Reserve ended its facilities programs in October 2014 and began then announcing a "back to normal" run that was finally fulfilled in December with a rate hike of 25bp.

The ECB on the other hand did the "whatever it takes" promised by Draghi back in 2012 and announced a â‚¬1.1 trillion quantitative easing program at the beginning of this year, expanding it softly also in December.

The EUR/USD pair started the year at 1.2101 and closed it at 1.1280. The bearish momentum in the pair extended down to 1.0461, and reversed course when the FED failed to pull the trigger in April, as initially expected. Ever since, the pair lacked directional strength until October, when it resumed its decline following the latest announcements of both Central Banks: US Yellen promised a rate hike before the year end, whilst EU Draghi said he was ready to raise the bet, and extend QE.

Both did as promised early December, yet the pair advanced afterwards, pointing for a positive monthly close. Why? Because Yellen had became extremely foreseeable, finally raising rates when the financial world had it already priced in, whilst Draghi announced the poorest extension of QE possible, sending European stocks markets sharply lower, and therefore helping the common currency in its latest recovery.

Win-win scenario for the greenback

Now hovering right below the 1.1000 figure, there's little more the pair can do this year, moreover as no major data is pending of release. So what's next from here?

An educated guess is that the USD will end up winning the battle during this 2016, moreover if the ongoing policies are maintained by both Central Banks. The strength and length of the US rally will depend solely on the pace of future rate hikes in the US. 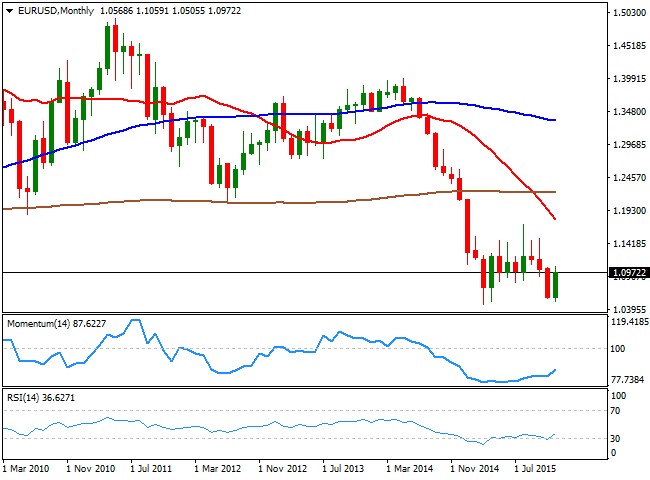 From a technical point of view, the dominant bearish tone remains firm in place, although it has long lost downward momentum. The monthly chart shows that the technical indicators are barely recovering from oversold levels, but that the pair is way below its moving averages, indicating that bears maintain the lead. The same chart also shows how strong buying interest is around the 1.0500 region and pretty much confirms that a break below the level is required to start speculating above parity as a probable target for 2016. 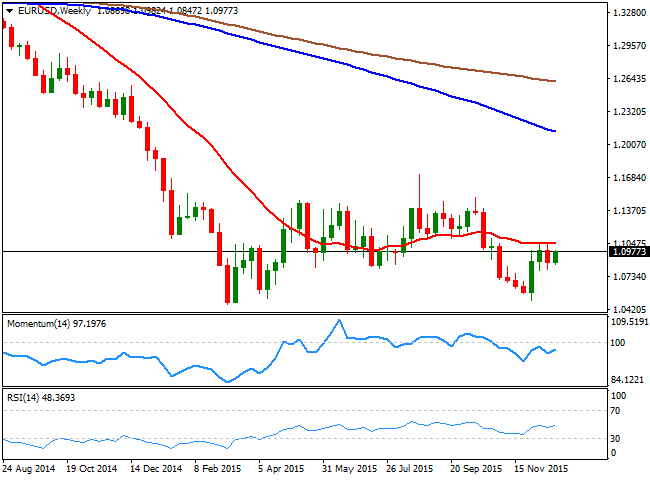 Parity will indeed be a major psychological support, which means that a break below should only fuel the panic sell-off, down to 0.9600, where the pair has several monthly highs and lows from 2001/2. A strong EUR seems out of the picture for now, with advances up to 1.1250 likely to be seen as barely correctives by market players. Should the pair recover above this last, it will need to retake the next resistance at the 1.1440/90 region, where the pair's advance stalled several times over these last few months.

In the weekly chart the pair is also correcting higher, but overall bearish, as the price stands below a flat 20 SMA, while the technical indicators have recovered from oversold levels but remain far below their mid-lines, also supporting the bearish case.

Anyway and as usual, the market will be full of imponderables that can change markets' perception of currencies in a blink. Trade what you see and not what you believe, and you can't get it wrong.

From a long-term perspective, as portrayed in the 3-box reversal chart below, the EUR/USD is really under the pump. The large column of Os -where each box corresponds to a 200 pip depreciation- drawn from the 1.3900 top is the one anchoring the objective bearish line (in red) dictating the bearish trend since last year. As long as this line is not violated, a point and figure analyst will consider the trend as bearish.

On this same resolution we don't have a double-bottom continuation signal yet. Only a firm break below 1.06 would print the sell signal and invalidate the green line nascent from a 1.0600 box. Likewise, only a close above 1.18 would generate double-top signal and threaten the 45 degree objective trend line. 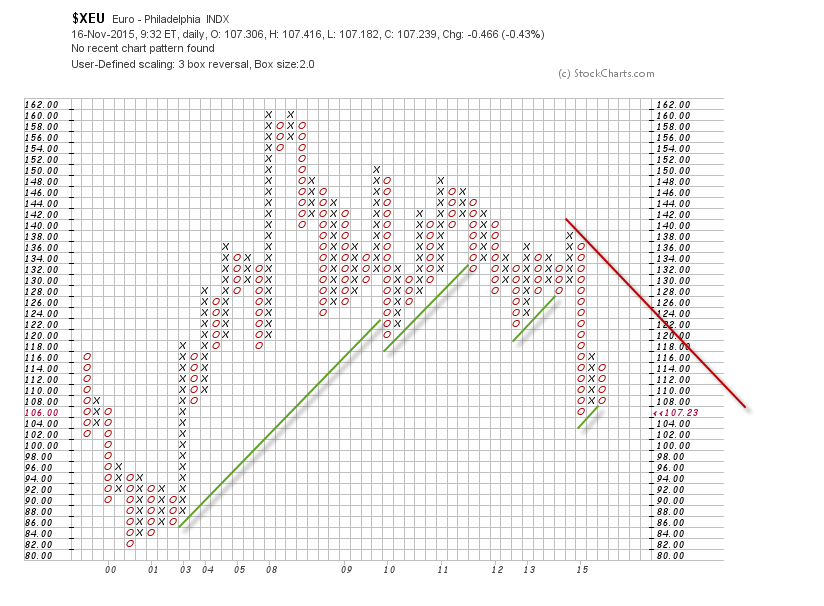 If we visit the EUR/USD 1-box reversal chart we can establish an horizontal count on both directions. On the upper side, a break above consolidation points to 1.4200, while on the way South, and reafirming the 3-box analysis, the calculation brings us below the historic low of 0.8400 to 0.8200 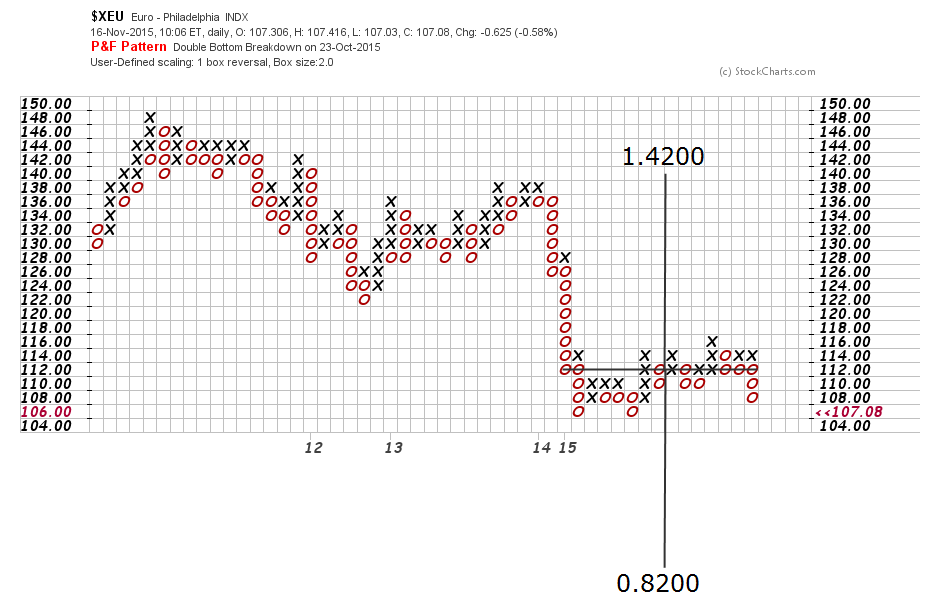 Read also other related articles about what 2016 could bring for the markets:
Currencies
GBP USD Forecast 2016
USD JPY Forecast 2016