Highest since 1990 – US inflation has hit 6.2%, reaching not only a historic peak but also sending the dollar substantially higher. The mix of Brexit acrimony and disappointing UK growth figures contributed to a downfall for GBP/USD. What's next? Critical data for the subsequent rate decisions stand out in the upcoming week.

Prices of cars, shelter and almost all products and services jumped in October, pushing not only the headline Consumer Price Index to 31-year highs but also Core CPI to 4.6%, smashing all economists' expectations. After a hesitant initial reaction, markets moved more aggressively to price quicker rate hikes from the Federal Reserve. The dollar jumped across the board.

Will the Fed indeed move faster? The answer is no, according to San Francisco Fed President Mary Daly, who spoke after the release. On the other end of the spectrum, Saint Louis Fed President James Bullard, two hikes are on the cards for 2022. Bond markets are pointing to a high potential for "lift-off" – the first increase in borrowing costs – to come in June next year.

On the other side of the pond, Brexit tensions worsened. David Frost, the UK point man for the topic, signaled he is ready to use Article 16 of the Withdrawl Treaty to suspend the deal, raising fresh fears of an outright trade war.

UK Gross Domestic Product data for the third quarter came out at 1.3%, worse than 1.5%, and added some pressure to the pound. It cast doubts on the chances for a BOE rate hike in December.

How is the labor market doing after the furlough scheme? Tuesday's employment data for September is set to provide some answers. Economists expect an unemployment rate of 4.5%, a repeat of the figure in August, and moderation in wages, including bonuses, from 7.2% to 7% YoY. The BOE is watching both figures ahead of its December rate decision.

Wednesday's CPI figures for October are even more crucial for the BOE – and the pound. Headline inflation stood at 3.1% YoY in September, and any advance would likely seal the deal on a rate hike. Conversely, a slide back below 3% could cast doubt on such a move. Apart from headline CPI, core prices are also of interest. Price pressures that are disconnected from the surge in energy costs could also send sterling higher.

Friday's retail sales statistics could also shake the pound. After posting a moderate drop of 0.2% in September, an increase of 0.5% is on the cards for October.

Apart from the busy economic calendar, Brexit will likely remain a market-mover for sterling. British and EU negotiators continue haggling over the rewriting of the Northern Ireland protocol, and threats of using Article 16 could further pressure the pound. The saying "no news is good news" continues to be relevant for the currency – as long as officials are holed up in talks and refrain from speaking with the press, sterling could rise. 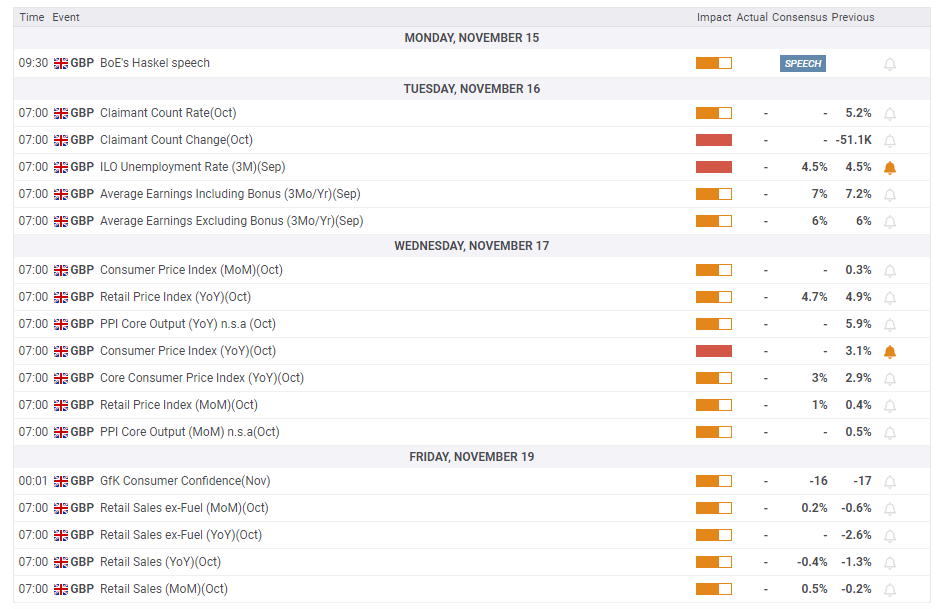 US Events: Retail sales and Fed speakers in focus

Never underestimate the US consumer – contrary to surveys showing weaker sentiment, Americans have been flooding the stores well before Black Friday. Another 0.7% increase is projected for October, repeating September's healthy gain. The Control Group – aka "core of the core" – is forecast to rise by only 0.4%, half of the previous month's leap.

Increased consumption means a strong economy and higher inflation – a reason for the Fed to consider acting sooner to tighten policy. However, after several impressive months, a slight decline cannot be ruled out.

Fed officials will be speaking throughout the week, and they will be able to comment on consumption and inflation data. The most important ones to watch are Christopher Waller, a governor at the center of the dove-hawk spectrum, and Vice Chair Clarida. The latter tends to provide numerical targets for changing policy, grabbing headlines and moving markets.

When will Congress approve the larger spending bill? Negotiations within the Democratic Party have been dragging on for months, and a happy ending may have to wait until Thanksgiving. 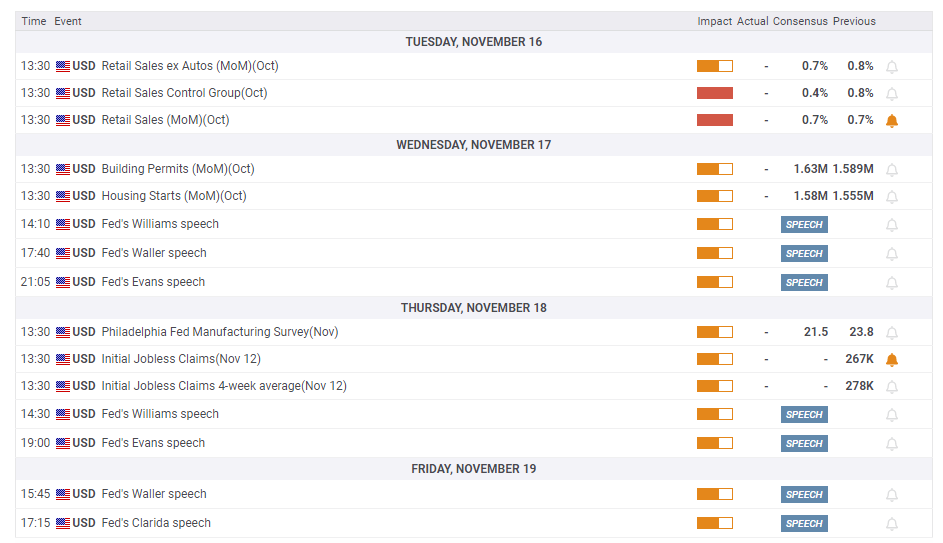 Pound/dollar has hit the lowest levels in over ten months, and momentum is clearly to the downside. The 50-day, 100-day and 200-day Simple Moving Averages (SMAs) lean lower and loom above the currency pair. Is sterling oversold? Not yet, at least according to the daily chart. The Relative Strength Index (RSI) is still above 30, thus outside the oversold territory.

The broken 1.34 support level remains a battle line. The next significant level to watch is only 1.3550, which worked in both directions in recent months. It is followed by 1.36, which capped a recovery attempt in early November, and then by 1.3710 and 1.3830.

There is probably room for another test of the downside before GBP/USD recovers. Upbeat UK data can convince markets that the BOE will raise rates, triggering a more meaningful recovery.

The FXStreet Forecast Poll is showing a neural short-term bias but a bullish run afterward, with GBP/USD topping 1.35. It is essential to note that experts have somewhat downgraded their forecasts in the past week, reacting to the dramatic downward move. 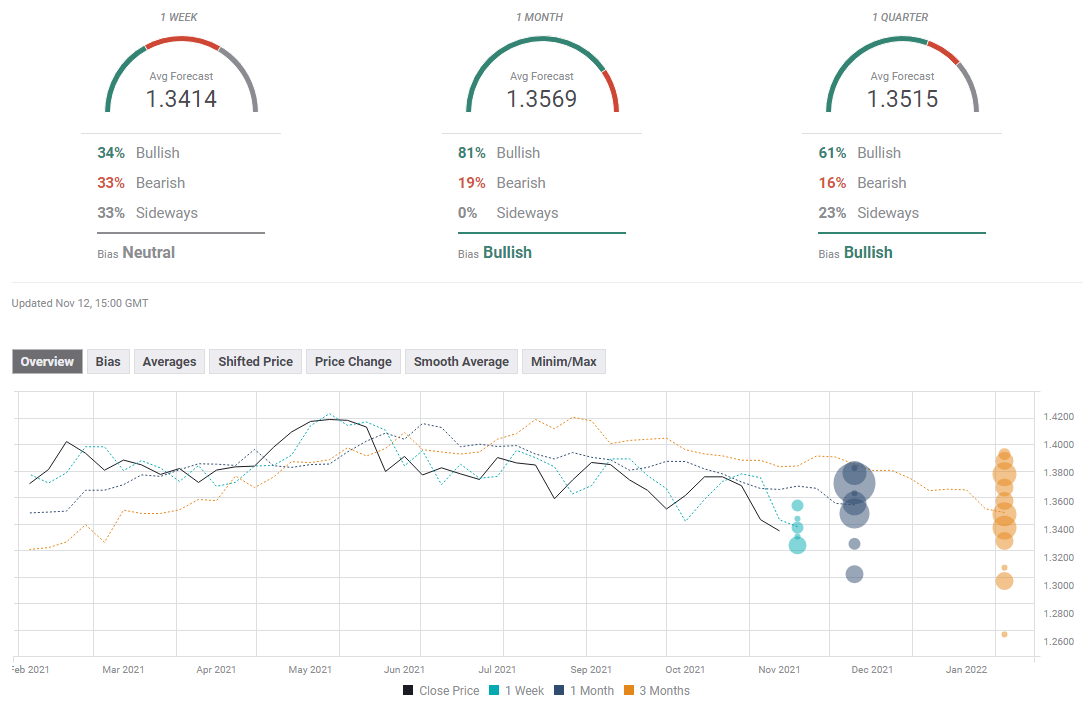