Inflation became more than a headache for American consumers as prices for a wide spectrum of everyday goods rose at their fastest pace in more than 30 years.

The Consumer Price Index Index (CPI) jumped 0.9% in October and was 6.2% higher than a year ago, reported the Labor Department on Wednesday. This compared to forecasts from the Reuters survey of economists of 0.6% and 5.8% and September’s increases of 0.4% and 5.4%.

Core inflation, which excludes food and energy prices on the logic that their volatility is often transitory, soared 0.6% for the month and 4.6% in the year, also the highest pace since 1990, following 0.2% and 4% increases in September.

Wherever consumers look, from gasoline and fuel oil with winter on the way, to food, cars and housing, everything is more expensive.

Fuel oil for heating, used mainly in older homes in the Northeast, rose 12.3% in October and is up 59.1% year over year. Gasoline, a necessity for the vast majority of Americans, soared 6.8% last month and is 60% higher since October 2020.

New automobile prices were 1.4% higher for the month and 9.8% over the year. Used car prices climbed 2.5% and 26.4% respectively, driven higher by a scarcity of many new models due to the computer chip shortage.

Housing expenses, including home and rental costs, rose 0.5% in October and are 3.5% higher on the year. These prices comprise about one-third of the CPI calculation.  Because rental and mortgages are long term contracts, increases in this category become permanent additions to household expenses.

When consumers see their real income (wages minus inflation) drop month after month as inflation erodes buying power, the demand for compensatory wage increases can rise proportionally. When combined with the higher salaries already offered by many employers in an effort to secure scarce workers, the wage side of a wage-price spiral can become much more emphatic.

Treasury yields were sharply higher  after the CPI data and continued to rise throughout the day. 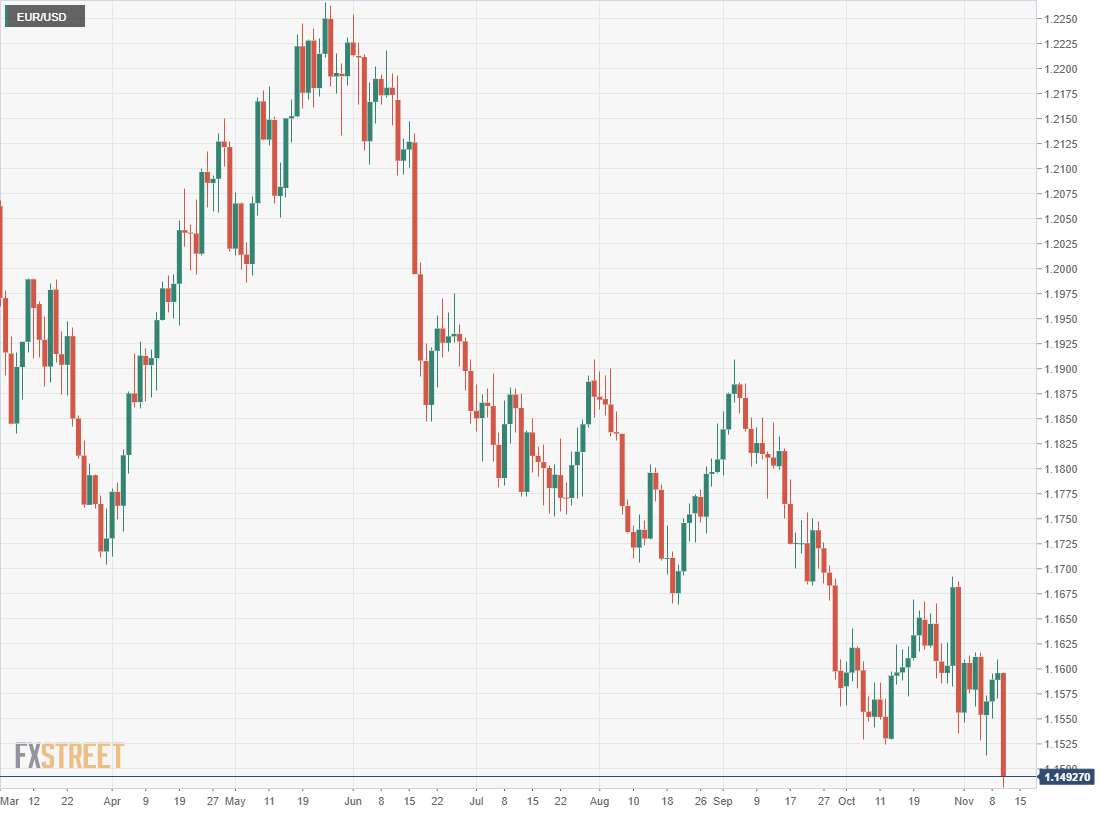 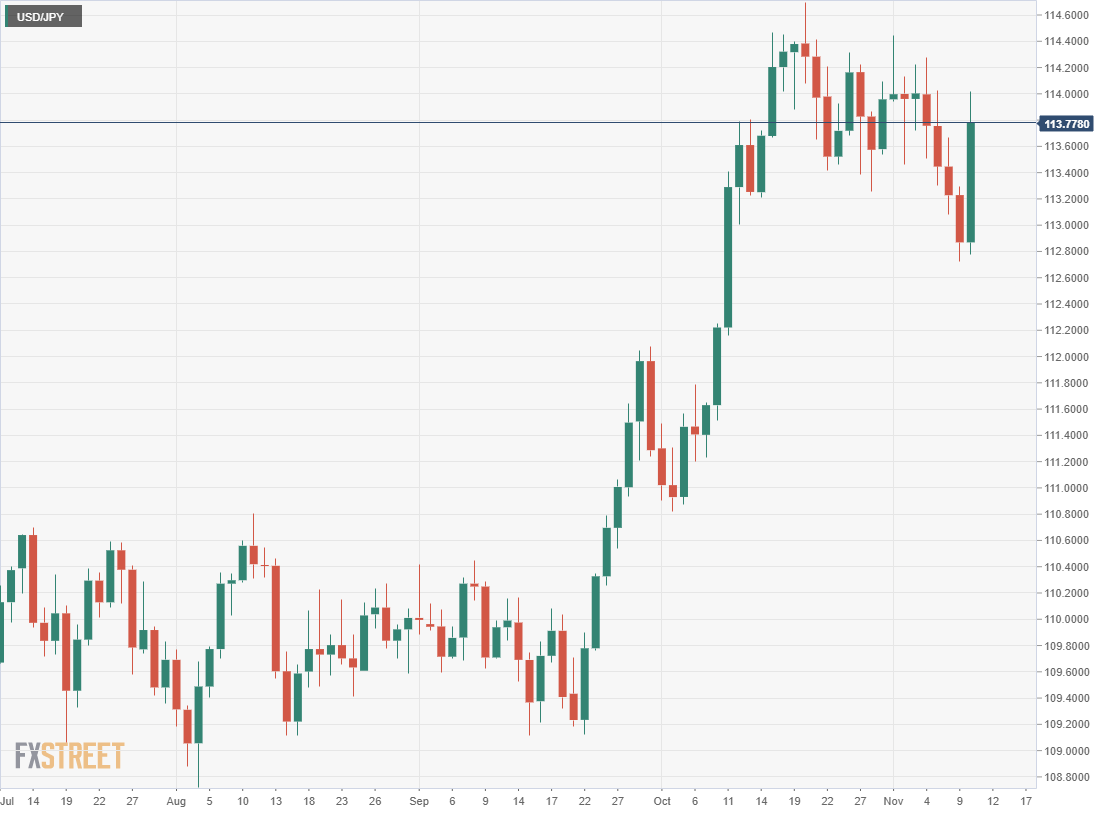 The October CPI data, which presages the Personal Consumption Expenditure (PCE) Price Index data at the end of the month complicates Fed policy enormously.  The Core PCE Price Index, the Fed's preferred measure, has mirrored the gains in CPI. The September PCE rates of 4.4% in headline and 3.6% for core were the highest on record and should increase when the October data is released by the Bureau of Economic Analysis on November 24.

Central bank and government policymakers have maintained for several months that price gains will be limited and temporary. That assertion has become increasingly hard to credit when CPI has more than quadrupled from 1.4% in January to October’s 6.2% and has averaged 5.5% for six months.  It is even more difficult to believe when one of the major factors in the surge in CPI is the increase in costs for the long term contracts in the housing market.

When the Fed announced its long-awaited bond taper at this month's Federal Open Market Committee  (FOMC) meeting, the $15 billion monthly reduction was specified for November and December only.

The FOMC statement said that while the committee expected that the cuts would continue, the decisions for next year would be determined  by economic conditions.

Chair Jerome Powell has been at pains over the last several months to assure that a reduction in the bond program, even to its demise this coming June, does not mean a fed funds rate hike is imminent.

That condition has become harder to believe. In the September Projection Materials the Fed governors estimated that the fed funds would likely get one 0.25% hike next year.

Predictions from the Chicago Board Options Exchange (CBOE) compiled from futures accounts in the fed funds show a very different picture. 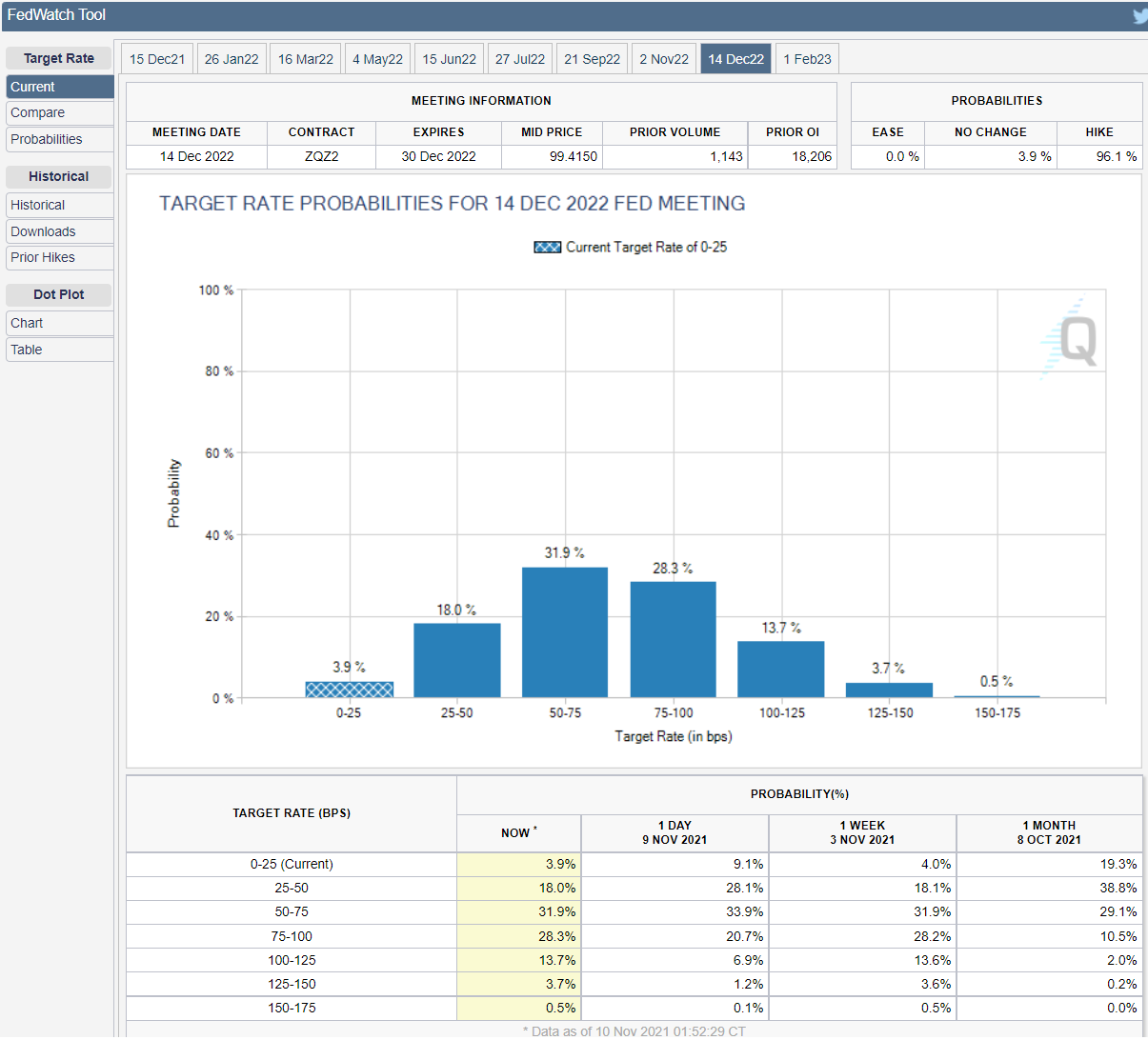 The Federal Reserve has spent almost two years focusing its monetary policy on the US labor market. Even though US payrolls remain several million below their pre-pandemic levels, the Fed now finds that its rate policy is being set by its old nemesis, inflation.

Gold: Bears back in control and target the $1,750s

The price of gold has been on the backfoot while the greenback consolidates and risk appetite improves. The US stock market has surged back to life with the S&P 500 running up over 1.6% on the day so far.