Where will the dollar rally halt? A mix of factors has been boosting the greenback – which seems unstoppable, especially as the pound has had its share of issues. Minutes from the Fed – the main dollar driver – and the Delta covid variant remain in the limelight.

Fed hawkishness: Robert Kaplan, President of the Dallas branch of the Federal Reserve, is a known supporter of reducing the bank's bond-buying scheme. He sounded the same comments and was joined by Fed Governor Christopher Waller. Both have extended the greenback's run dating back to the bank's mid-June decision.

Finally, US Nonfarm Payrolls provided some relief for GBP/USD. While America gained 850,000 jobs in June, revisions were meager and wage growth remained stable at 3.6%. Moreover, the publication served as a trigger for traders to pare back some of their dollar profits.

In the UK, the newly appointed Health Secretary Sajid Javid insisted that the reopening remains intact, showing confidence about returning to normal. However, as cases continue rising – and hospitalizations are inching higher – some cast doubt about loosening restrictions on July 19.

Moreover, officials warned that the winter could be worse, potentially slowing economic growth. 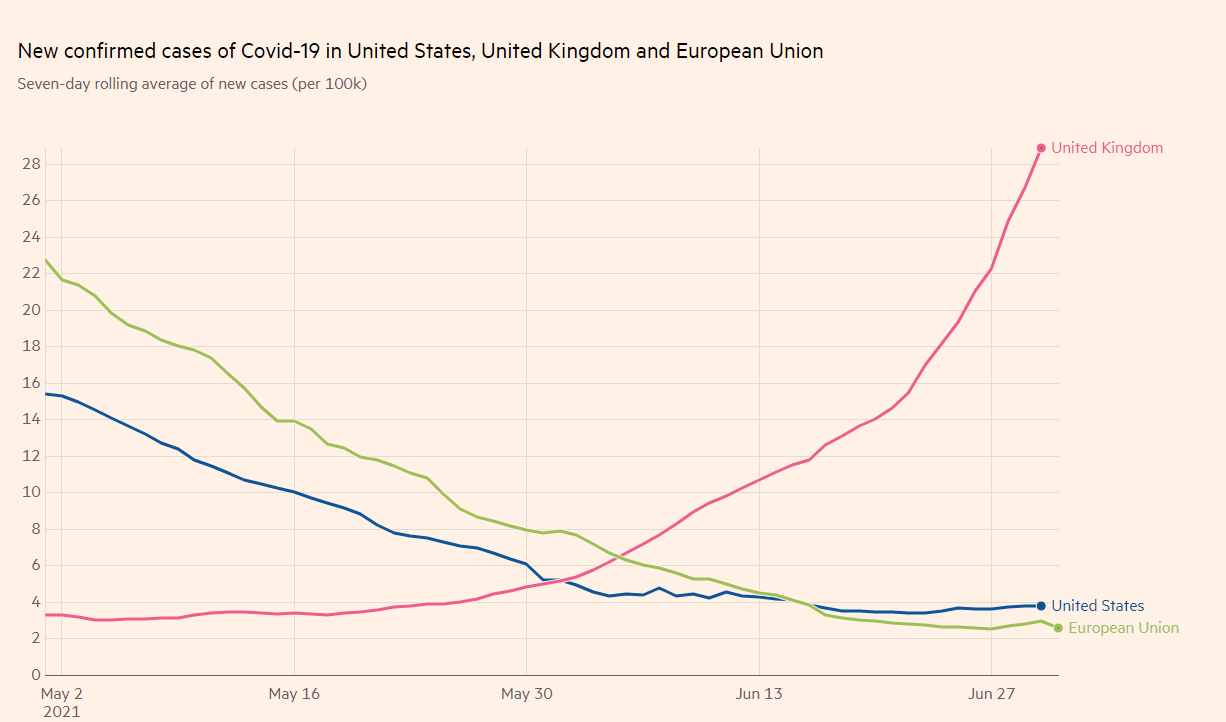 However, UK data mostly missed expectations, adding to pressure on the pound. First-quarter Gross Domestic Product was revised down to -1.6%.

Will the government postpone the reopening again? Perhaps July 19 will remain as the day when Britain loosens restrictions, but it could be less of a "Freedom Day" than anticipated. The rapid spread of the Delta virus variant may cause Prime Minister Boris Johnson to leave some measures intact during the summer, potentially weighing on economic activity.

The pace of the UK's vaccination campaign is critical. Roughly two-thirds of the population have received at least one vaccine shot, and half have been jabbed twice – a higher level of protection is needed against the new strain. Ramped-up efforts should help Britain reduce infections and allow the reopening, but doubts remain. Sterling needs this chart to continue its ascent. 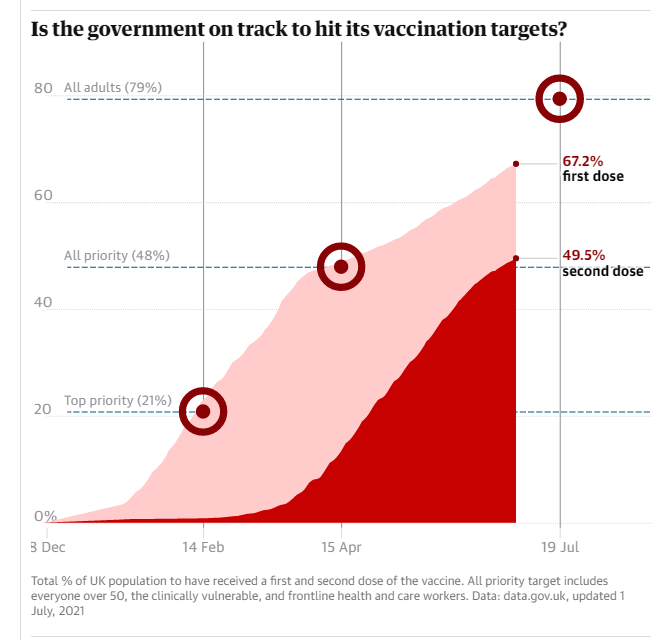 Brexit issues continue nagging, but their effect on sterling is diminishing. Moreover, Brits and especially European officials cherish their summer holidays and are unlikely to rock the boat during the warmer months.

Gross Domestic Product figures for May stand out on the economic calendar. After expanding by 2.3% in April, another month of robust growth is likely, as the reopening proceeded without interruptions. Industrial output and manufacturing figures are also of interest.

US events: Fed minutes and Services PMI in focus

Americans will only kick off the trading week on Tuesday after enjoying a long weekend due to Independence Day. President Joe Biden circled the date when 70% of Americans would receive at least one shot. While the objective will surely be missed, the recent pickup in immunizations is encouraging.

The US seems to have avoided the highly transmissible Delta variant, but such a scenario cannot be ruled out. The probability of suffering a setback will drop if the recent uptrend is sustained. 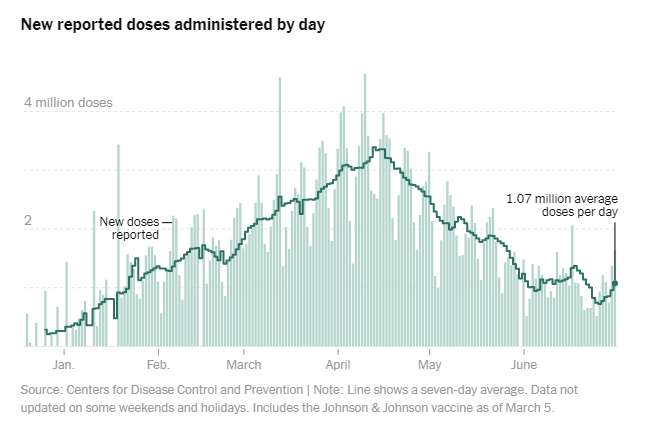 There are two main events on the economic calendar. First, the ISM Services PMI is set to show a moderate decline yet remain on high ground, reflecting robust growth. Investors will watch the Prices Paid component for signs of inflation, especially after the Manufacturing PMI hit a record high.

The second event is the Federal Reserve's meeting minutes from its June decision. That event marked a considerable shift toward withdrawing monetary stimulus and acknowledging higher prices. Did officials sound even more bullish about the economy behind closed doors? That would boost the dollar and serve as a signal that tapering bond buys is coming sooner rather than later.

On the other hand, the minutes often soften the decision's impact – a more nuanced message could come out of the protocols that allows the dollar to back off.

Pound/dollar is entering oversold conditions – at least according to the Relative Strength Index (RSI) on the daily chart. The loss of the 50-day Simple Moving Average (SMA) in mid-June and later the 100-day SMA proved decisive, but the RSI may suggest a reversal could be on the cards.

Some resistance awaits at 1.3785, which provided support in mid-June, and it is followed by 1.3940, which capped a recovery attempt later on and converged with the 100-day SMA. A substantial barrier to gains is at 1.4000, which is psychologically significant and has held down cable several times.

The dollar may take a breather, but the change of course at the Fed and virus worries could result in the pair resuming its declines sooner rather than later.

The FXStreet Forecast Poll is showing that the rout is not over – that GBP/USD has more room to fall in the short term before bouncing and recapturing the 1.40 level in the medium and long terms. 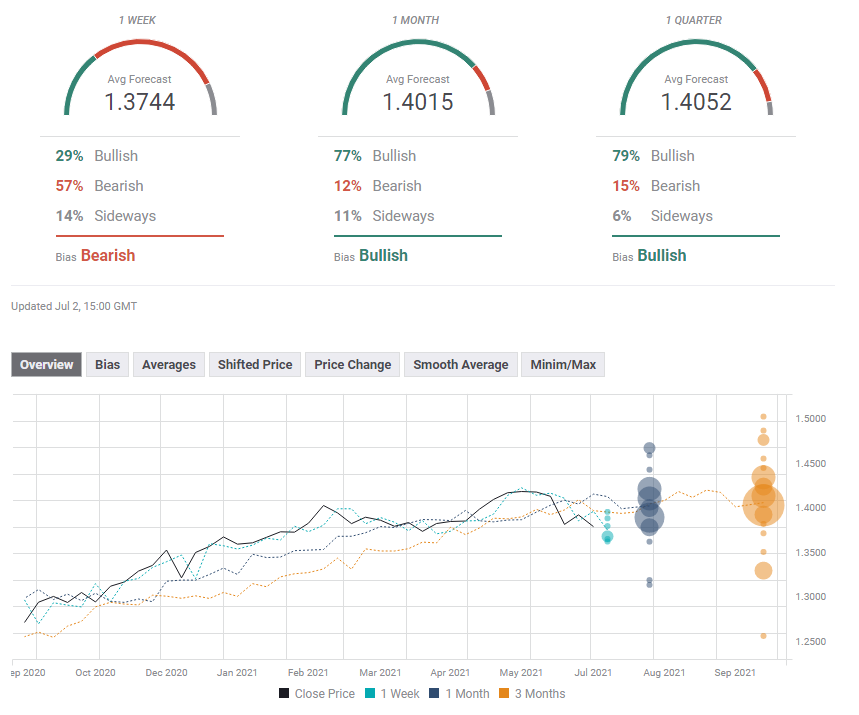