Markets have been gradually taking less and less out of the positive newsflow on the trade dispute as expectations have built for a move to “phase one”. President Trump notes that the two sides are into the “final throes” of a deal, however, the lack of market conviction would suggest an increasing need for a handshake picture between Trump and Xi to drive decisive positioning. Perhaps also there is a degree of consolidation in front of Thanksgiving (which tends to reduce liquidity for both the Thursday and Friday) but there is increasingly a lack of direction on bond markets. The 2s/10s spread is seen as a gauge for sentiment (widening being risk positive) but has been drifting sideways in recent days. Subsequently, we are seeing a quieter drift on forex majors, but with a dollar positive bias. There are some key levels being tested/eyed amidst this drift (a look at $1.0990 on EUR/USD, into the 109.00/1090.50 resistance on Dollar/Yen, and $0.6765 on the Aussie. However, whether the dollar bulls have the conviction for a breakout in front of Thanksgiving will be interesting. Furthermore, given the lack of liquidity in the coming days, could this drive false breaks of these levels? One area to see unabated positivity in all this though is Wall Street, which continues to pull into all-time highs. The contrarian may wonder about “buy on rumour, sell on fact”. 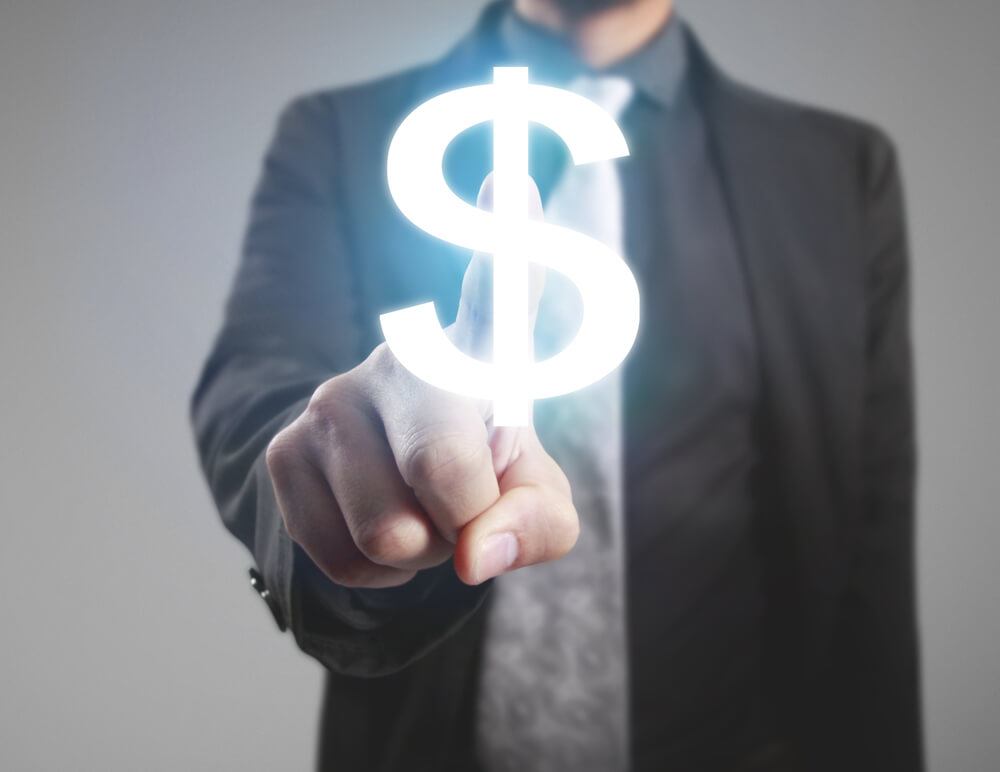 Wall Street closed with solid gains last night with the S&P 500 +0.2% at 3145, whilst US futures are a tick or two higher again today. There is more of a mixed look to Asian markets, with the Nikkei +0.2% and Shanghai Composite -0.2%. Cautious optimism is the early feeling in Europe, with FTSE futures +0.1% and DAX futures +0.1%.  In forex, there is an edge of USD strength forming amidst major markets lacking real conviction. It is interesting to see GBP again one of the more active currencies, underperforming today. In commodities, the dollar gaining today is a mild drag across the precious metals with gold and silver marginally lower, whilst oil is also slightly lighter.

Once more there is a big US emphasis on the economic calendar today. The first revision to Q3 US growth, the US Prelim GDP is at 1330GMT is expected to show no change at +1.9% (+1.9% Advance, +2.0% final Q2). The core Durable Goods Orders (ex-transport) at 1330GMT are expected to show marginal growth on the month of October at +0.1% (after a decline of -0.4% in September). At 1500GMT the US Pending Home Sales are expected to grow by +0.8% in October (after a +1.5% growth in September). EIA oil inventories could be interesting this week with an expected drawdown on crude stocks of -0.3m barrels (after +1.4m barrels of build last week) after builds in nine of the past ten weeks. The Fed Beige Book is at 1900GMT and will help to paint a picture of the Fed’s economic outlook.

Although risk appetite has been relatively positive in recent sessions, the Aussie has struggled for buying traction. We have subsequently seen a trend lower on AUD/USD forming  (a three week downtrend ) but also a fall through what is effectively a mid-range pivot at $0.6805. Momentum indicators continue to deteriorate (MACD lines now falling below neutral and Stochastics below 20) which points to intraday rallies being sold into. Resistance is building around the $0.6805 pivot now and the trend lower is squeezing the market to put pressure on the support at $0.6765 today. This looks to be a key crossroads for AUD/USD. A closing breach would be the next key breakdown and open the bottom of the $0.6670/$0.6930 range. The RSI moving below 40 would be a momentum confirmation signal for the breakdown. There is much that the bulls would need to do to shift the outlook, with the hourly chart showing the hourly RSI failing at 60 and hourly MACD consistently below neutral. Initial resistance is around the pivot and would need a move above $0.6835 to imply a recovery developing. 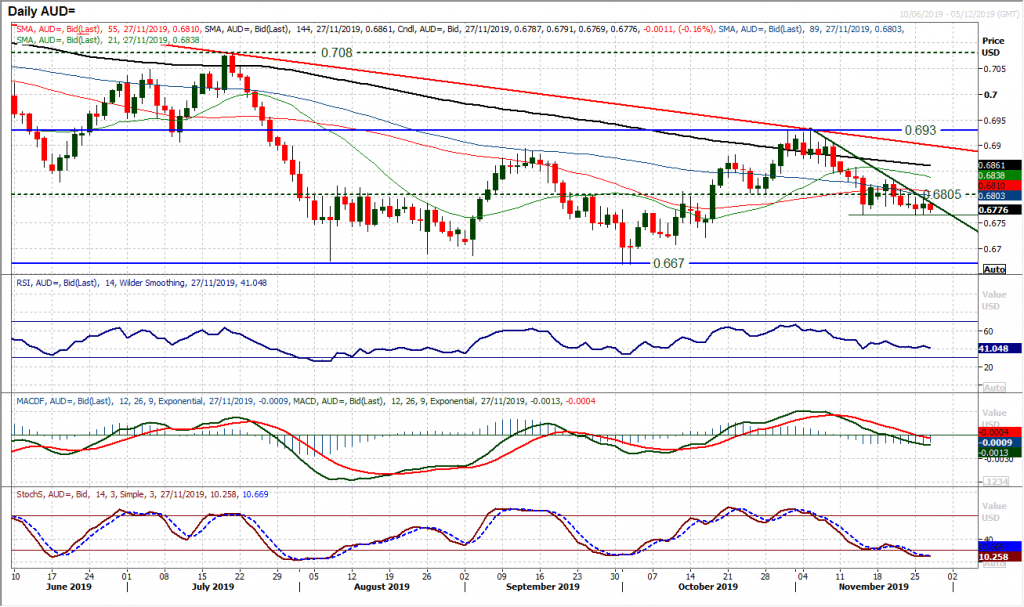 With the trend of higher lows and higher highs we see oil as a buy into weakness. What has been noticeable at the start of this week has been that the bulls are looking to now accept last week’s breakout. Throughout the past eight weeks of recover, it has been a fairly consistent run where the breakouts have been subsequently retraced. Those retracements have eventually formed the next higher low, but the corrective slip has found support in the band between the 50% Fibonacci retracement (of $63.40/$51.00) at $57.20 and the old breakout at $57.85, the bulls seem ready to build from a higher level this time. Momentum indicators fully confirm the run higher, but there is a slight caveat as the RSI is still struggling to push into the 60s. Monday’s support formed at $57.20 will become increasingly important now. A break above the 61.8% Fib level at $58.65 opens 76.4% Fib at $60.45. Intraday weakness is a chance to buy whilst above $57.20. 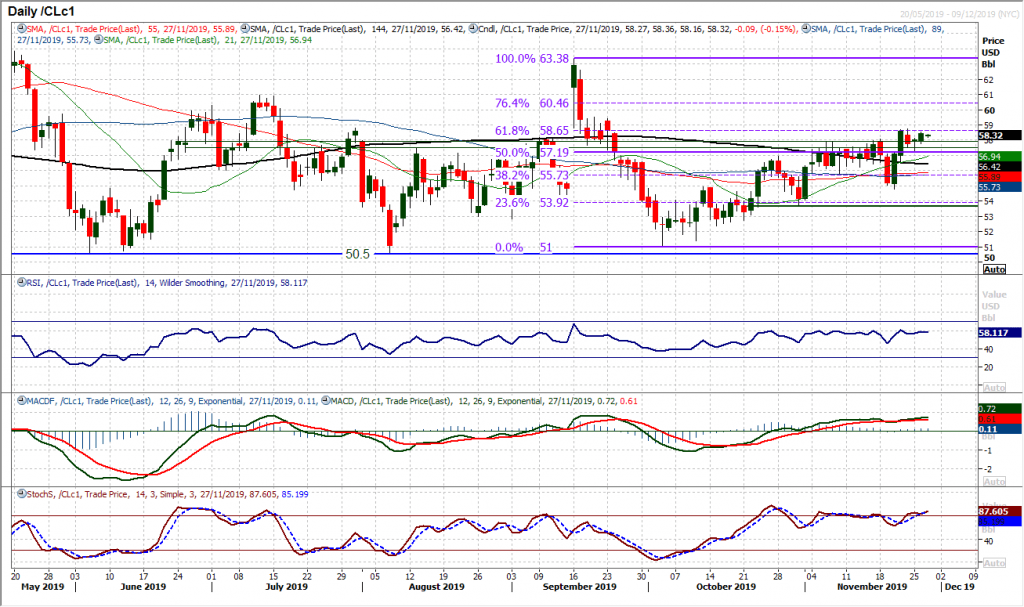 Wall Street continues to buy into the narrative that the US and China are closing in on a “phase one” agreement. The With the S&P 500 consistently at all-time highs, the Dow has again joined the party. A move above the previous high of 28,090 has posted an all-time high. The session was hardly one to smash the lights out, with a daily range of just 104 ticks (at 169 ticks the Average True Range s around 2019 lows). However, momentum is ticking positively with RSI above 70 and Stochastics rising into strong configuration. The move also bolsters 72,675 as a key higher low now. The suggestion is there is upside potential still with the positioning on the momentum indicators, so intraday weakness is a chance to buy. 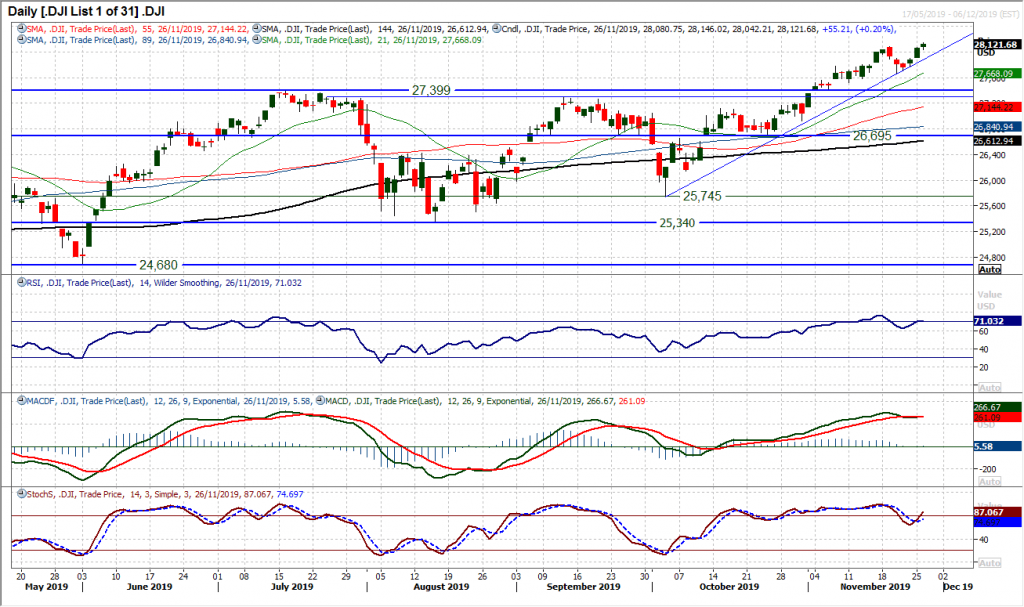 Looking ahead to payrolls as markets bounce on China / US truce

Equity markets have started the week on an upbeat note, after a bumper round of earnings reports in recent sessions have helped to boost sentiment.