The EUR/USD pair ended September trading at its lowest in over a year, around the 1.1600 threshold. The pair consolidated losses on Friday to finish the week trading at levels last seen in July 2020. Demand for the greenback extended throughout the week, exacerbated by comments from US Federal Reserve chief Jerome Powell.

Market participants focused on growth-related headlines, mainly those that hint at a delay in the global economic comeback. As the world aims to return to some form of “normal” life, bottlenecks or supply chain issues take centre stage. The machine is too big to be restarted by just pushing a couple of buttons. Fuel shortages in the UK took centre stage this week amid a shortage of tanker drivers, to the point the government had to launch the army to distribute gas.

But it is not an issue exclusive to the UK. Fed head Powell noted that supply chain issues could lead to a longer interval of higher inflation, calling the latter “frustrating” and seeing it running into 2022. “The current inflation spike is really a consequence of supply constraints meeting very strong demand, and that is all associated with the reopening of the economy, which is a process that will have a beginning, a middle and an end,” Powell said.

Lagarde distances herself from other central bankers

Across the Atlantic, European Central Bank President Christine Lagarde delivered a similar message. “We’re back from the brink, but not completely out of the woods,” adding that supply-chain disruptions were accelerating in some sectors while rising energy prices were something to watch.

Speculative interest rushed to price-in a tighter monetary policy in the US, resulting in Wall Street edging sharply lower on a weekly basis and investors rushing into safe-haven currencies. Worth mentioning is that ECB’s Lagarde has distanced herself from other central bankers,  as she noted the latest twist in bond purchases is just “recalibrating” and that they will maintain their accommodative policy for as long as necessary.

Generally speaking, policymakers are concerned but still optimistic the current issues are a temporary consequence of the ongoing post-pandemic recovery.  A tighter monetary policy will mean reducing the massive financial stimulus that the market happily dumps into high-yielding assets such as stocks.

Eyes turn to US employment figures

The macroeconomic calendar was scarce these past days, with the focus shifting to next week US Nonfarm Payrolls report. US Fed chief Powell said multiple times that the central bank had reached its inflation mark to trigger tapering, noting that it will take just one good jobs report for him to accept the same for the employment threshold.

Ahead of the event, employment-related data coming from the country failed to impress. Initial Jobless Claims jumped to 362K in the week ended September 24. Also, the September ISM Manufacturing PMI employment sub-component printed at 50.2, worse than the 50.9 expected although better than the previous 49.

However, Durable Goods Orders rose by more than anticipated in August, up 1.8%, while Q2 Gross Domestic Product was confirmed at 6.7% QoQ, better than previously estimated. On the other hand, CB Consumer Confidence contracted to 109.3 in September from 115.2 in the previous month, while the ISM Manufacturing PMI beat expectations at 61.1 in September.

German GFK Consumer Confidence Survey improved from -1.1 to 0.3 in October, while the preliminary estimate of the September Consumer Price Index printed at 4.1% YoY. Finally, August Retail Sales were up a modest 1.1%, missing the market’s expectations.

Inflation in the Eurozone surged to 3.4% YoY in September, according to preliminary estimates, while the September Economic Sentiment Indicator improved to 117.8 from 117.6.

The US will release the official September ISM Services PMI next week, foreseen at 61.3, although the focus will be on employment. The ADP survey is expected to show that the private sector added 475K new jobs in September, better than the previous 374K. Market analysts anticipate the country has created a total of 500K new jobs in the month, while the Unemployment rate is expected to have contracted to 5.1%.

The EU will unveil on Monday, October Sentix Investor Confidence, previously at 19.6, and August Retail Sales, expected to have fallen 2.3% MoM.

The EUR/USD pair bounced modestly from its 2021 low of 1.1562, maintaining its negative technical stance after closing in the red for a fourth consecutive week. The long term picture shows that the pair is at an inflexion point, trading at a relevant static support area. Also, it is pressuring its 100 and 200 SMAs in the weekly chart, while below a firmly bearish 20 SMA. Technical indicators resumed their slides within negative levels, with the RSI heading firmly south at around 37, its lowest for the year.

The daily chart indicates that EUR/USD is correcting extreme oversold conditions, with further gains still unlikely, as the pair develops well below the 23.6% retracement of its latest slide measured between 1.1998 and 1.1562 at 1.1640. Meanwhile, the 20 SMA maintains its firmly bearish slope, while the 100 SMA accelerates its slump below the 200 SMA, indicating strong selling interest. Technical indicators advance within negative levels, not enough to suggest a bottom has been reached.

The corrective advance could continue once above 1.1640 toward the 1.1700 area, where selling interest will likely reappear. A break below the year low exposes the 1.1460/70 price zone, a long-term static resistance area, and a probable bearish target for the next week. 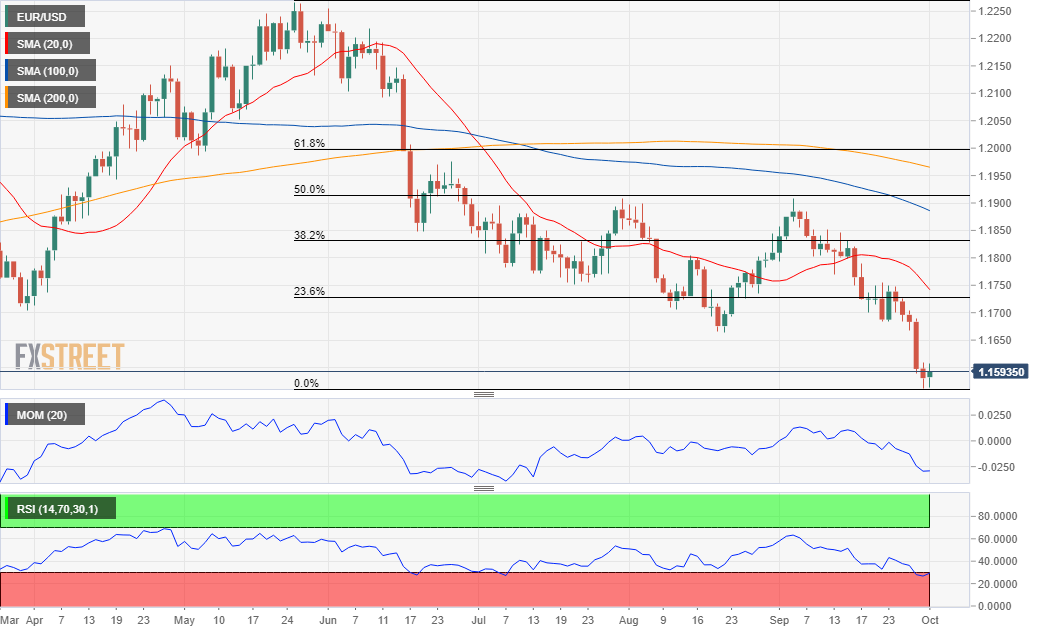 The FXStreet Forecast Poll suggest that the dollar’s rally is not over. The EUR/USD is seen falling further in a one-week perspective, with 50% of the polled experts on the bearish side. The average target is 1.1584, with an approach to the 1.1500 figure on the cards. The sentiment changes in the monthly and quarterly views, as in both cases, the pair is seen returning to levels above 1.1700 on average, with bulls at 60% and 57%, respectively. However, worth mention that mostly banks with outdated forecasts are those looking for higher targets.

According to the Overview chart, bears will likely maintain control in the next few weeks. The one-week and one-month moving averages head firmly lower, reaching lower lows for the year. The quarterly moving average has turned flat, somehow suggesting decreasing selling interest. Still, the same chart shows fresh possible lows in the 1.13/1.14 area.