Better late than never – for dollar bulls, who have benefited from a delayed taper tantrum. The fate of the Fed's tightening is set to face a major test with the Nonfarm Payrolls. Britain's various issues are also set to continue playing out.

This week in GBP/USD: Dollar soars on taper, other issues

All yield to yields – it took markets several days to react to the Federal Reserve's signal that it is set to announce the tapering of its bond buys in November. However, when 10-year Treasury yields hit 1.50%, the dollar soared across the board, and sterling was vulnerable to falls.

UK Prime Minister Boris Johnson prepared the army to provide gasoline to dried-out petrol stations. Brexit resulted in the departure of lorry drivers with EU passports, and calls to "keep calm and carry on" only exacerbated panic-stocking. Queues at the pump joined soaring natural gas prices before winter began in earnest.

Another concern temporarily supporting the safe-haven dollar was the fear that the US would default on its debt. Treasury Secretary Janet Yellen warned that America would hit its debt limit by October 18 if Congress did not act. Republicans refuse to suspend or raise the ceiling, while different factions in the Democratic Party continue tussling over a $3.5 trillion spending plan.

Jumping back to the other side of the pond, Brexit hit the pound also via a new EU-UK row over the Northern Irish protocol and a recent French-British clash over fishing.

However, the overall downside driver was the rise in yields, and that could change if markets push the bank.

Why only a stock market crash would stop the dollar's surge, contrary to normal behavior

One issue that has been off the agenda – but remains present – is COVID-19. Cases remain high on both sides of the Atlantic. 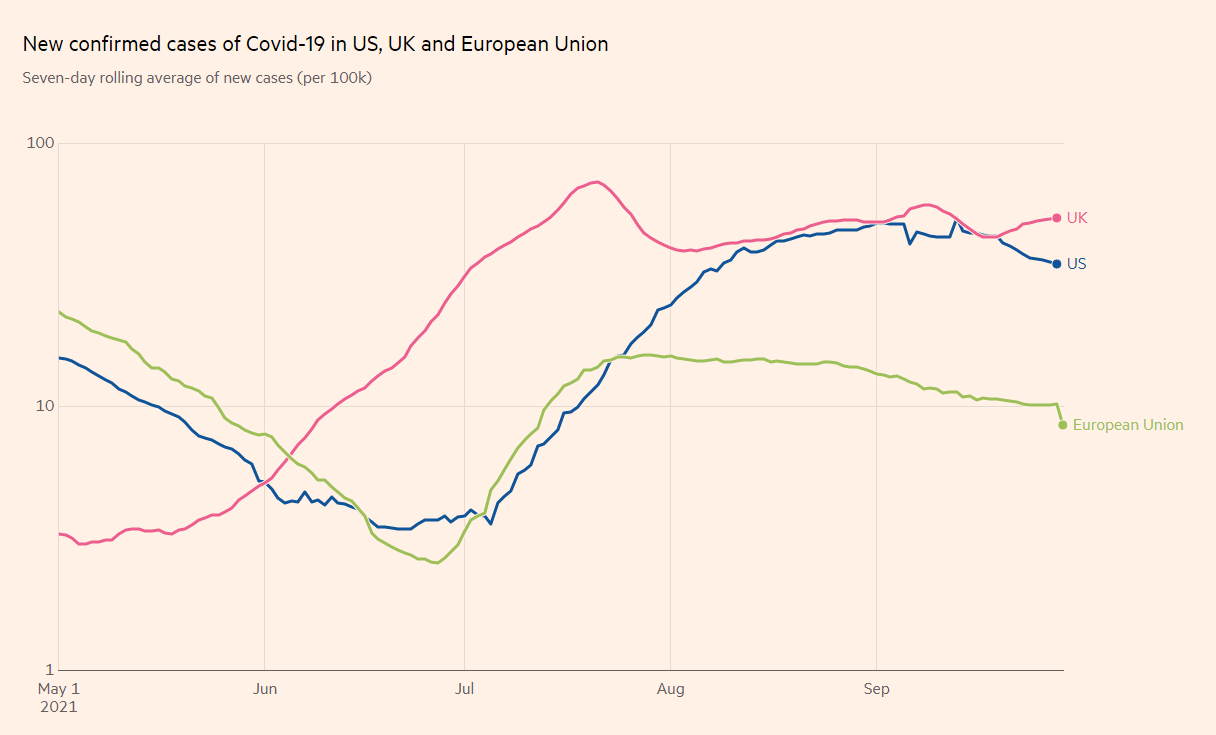 Will queues disappear from petrol stations? A return to normality at the pump would provide some relief for the pound, while an ongoing crisis – compounded by another increase in energy prices – could keep the pressure on.

The same logic applies to Brexit-related issues. If London and Brussels calm the tone around Northern Ireland and work toward solving the problems, sterling could move higher. Fishing is a minuscule industry.

It is essential to remember that the Bank of England recently tilted to the hawkish side, suggesting a rate hike could come before the bond-buying scheme concludes. The BOE releases minutes from the Financial Policy Committee and its quarterly bulletin. These could impact sterling in the upcoming week – especially as no other top-tier events are scheduled.

"All but met" – is what Fed Chair Powell said when asked if employment reached his desired level needed to begin tapering. While hawks at the bank do not need any more indicators, a disastrous Nonfarm Payrolls report for September could change the picture.

After a disappointing increase of 235,000 jobs in August, a more significant increase is likely in September. Growth remains robust, and figures such as Durable Goods Orders and Retail Sales pointed to upbeat demand. It would probably take a similar figure for the second consecutive month to trigger a taper rethink.

Average hourly earnings are also of interest, as they imply future inflationary pressures. After wages accelerated to 4.3% last month, some moderation is likely. If the headline NFP is somewhat disappointing, but salaries rise, it would probably be sufficient to cement Fed tapering.

Ahead of the jobs report, a complete buildup is set to shape expectations. After several inconsistent months, ADP's private-sector labor figures foreshadowed the miss in the NFP and will therefore be taken more seriously now.

The ISM Services Purchasing Managers' Index (PMI) is also critical. If the forward-looking gauge and its employment component hold up, investors will raise their expectations from the jobs report.

Ceiling getting close: Lawmakers have yet to alleviate America from defaulting on its debt at the time of writing. The clock continues ticking toward October 18, and markets could get nervous. The debacle in Washington has overshadowed the fate of President Joe Biden's vast $3.5 trillion spending package.

From Evergrande to energy issues, China's woes will likely play a less significant role as the second-largest economy enjoys a holiday throughout most of the week. 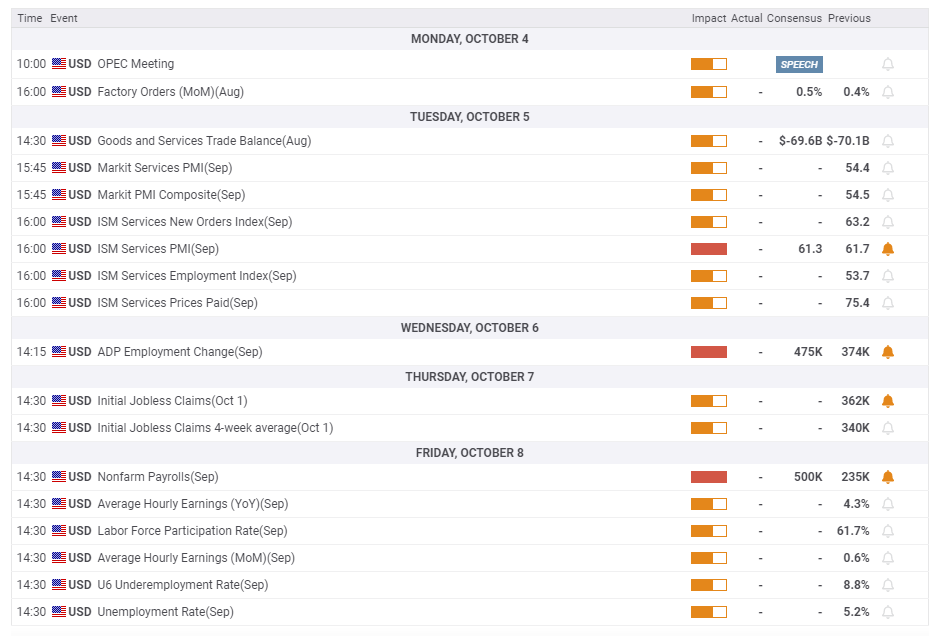 Pound/dollar has fallen out of the long-term range that characterized its trading by losing the 1.3570 level. That "Death Cross" pattern recorded in early September proved decisive for the breakdown. Momentum on the daily chart is sharp to the downside, and the new bounce has sent the Relative Strength Index (RSI) out of oversold territory.

Bears have a grip on the pair.

The dollar could take a breather early in the week, but unless the NFP is a disaster, the taper tantrum in the dollar will likely continue.

The FXStreet Forecast Poll is showing that experts foresee short-term pain but a substantial leap later down the line. It is essential to note that while the short-term forecasts have been downgraded, ones for the medium and long terms have only suffered minor declines. 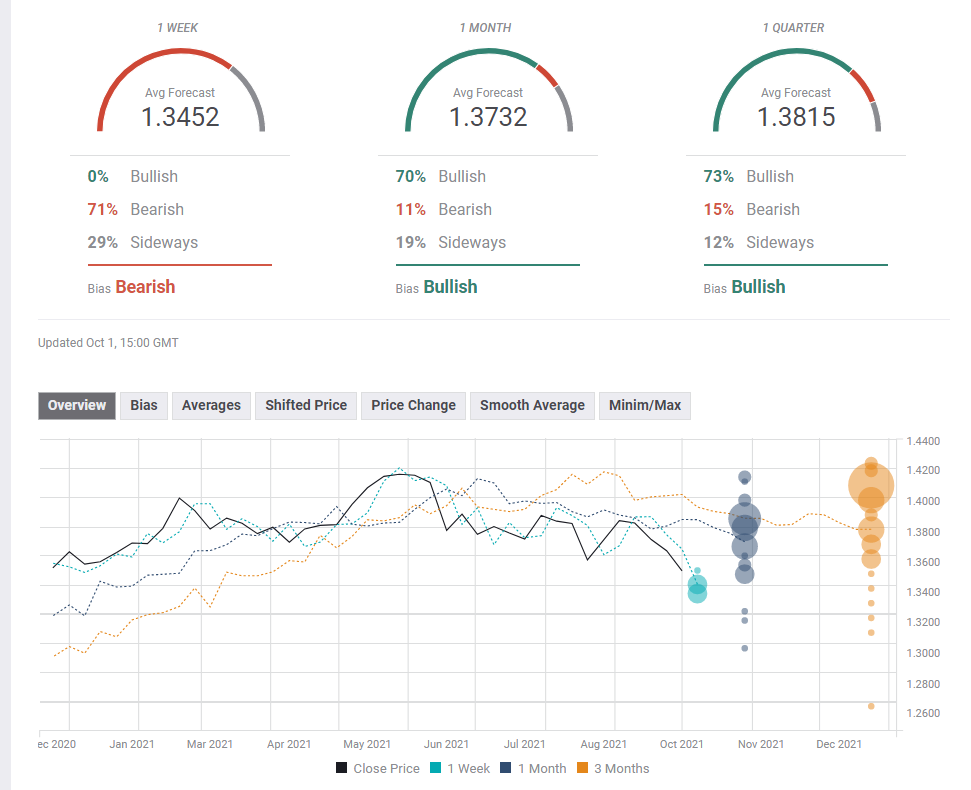