The EUR/USD pair is closing the week with modest gains above the 1.1100 level,  in a week were revamped old news took center stage. Fears of recession, central banks announcing more stimulus, trade tensions, and Brexit have been in a roller-coaster these last few days, leaving investors clueless and major pairs within familiar levels. The EUR/USD pair, however, fell to a fresh 3-week low of 1.1051 on Friday, bouncing from such low after US Federal Reserve Chief, Jerome Powell, spoke within the Jackson Hole Symposium.

In his prepared remarks, Powell dropped the “mid-cycle” reference to rate cuts which generated some turmoil earlier in the week. Once again, he said that the US economy is in a good place, adding that policymakers will act as appropriate to sustain the expansion. He sounded less concerned about inflation, indicating that “it appears to be moving back up closer to our symmetric 2 percent objective, but there are concerns about a more prolonged shortfall," and more concerned about external developments, blaming slowing global growth and trade policy uncertainty for weighing on the economic outlook. His words unleashed US President Trump’s anger, as he tweeted: “Who is our bigger enemy, Fed Chairman Powell or Chinese President Xi?” He also said he will make an announcement, which could shock the markets ahead of the weekly close.

Overall, uncertainty surrounding the above mentioned monetary and political developments persists, and the only thing clear in the financial sphere is sustained demand for safe-haven assets. Gold soared past $1,500.00 a troy ounce, the Japanese Yen resumed its advance, while demand for government bonds increased, keeping yields near record lows. Little we know at this point on what the Fed will do. The ECB, on the other hand, has repeatedly anticipated more stimulus coming which, at the end of the day, will skew the risk in favor of the greenback.  Away from EUR/USD, the American currency is suffering big.

Why happened what happened?

Once again, the Dollar was the lesser of two evils when compared to the shared currency. In the Union, Germany was said to be preparing to introduce fiscal stimulus measures a contingency in the event of a crisis, while in Italy,  Deputy PM, Matteo Salvini, said that a 50B euro budget is necessary for 2020 to bring about a “shock” fiscal stimulus program, while PM Conte resigned after Salvini broke their coalition government and called for an election. Salvini, later declared that he is willing to stay in the government to approve the budget. Also, the preliminary Markit estimates of manufacturing and services output continued to underperform, indicating that the economic downturn continues at the beginning of Q3. Also, European inflation was much worse than anticipated in July, down by 0.5% monthly basis and up by just 1.0% when compared to July 2018.

Mixed signals came from the US, as the FOMC Minutes, released last Wednesday, were perceived as hawkish. While some officials wanted to keep rates on hold, others pledged for a 50bps cut, but the document showed that in general, there’s no rush to cut rates much more. On Thursday, the US preliminary Markit Manufacturing PMI resulted at 49.9, its lowest reading in 119 months, while the Services PMI was down to 50.9, a 3-month low. Fears of a US recession escalated and the yield curve inverted once again, as, at the same time, a couple of Fed’s officials offered hawkish statements, somehow suggesting the US Central Bank won’t act to prevent a recession.

Meanwhile, the trade war escalated to new levels as this Friday, China announced its planning new tariff rates of between 5% to 10% applied to about $75 billion worth of US goods, starting September 1. That said, the global economic downturn will only worsen.

What will happen next?

The Jackson Hole Symposium will continue over the weekend, with a G-7 meeting included, which means that there’s the risk of some headlines triggering weekly opening gaps when the next week starts.

Beyond the political headlines, the macroeconomic calendar will be fulfilled with relevant data, which will give further signs of the economies’ health. On Monday, the US will release the Durable Goods Orders report, while Germany will publish the IFO survey. The second readings of German and the US Gross Domestic Product will also be out these days, seen at 0.4% and 2.5% respectively, unchanged from the previous estimates. The EU will release August Consumer Confidence, while Germany will release the preliminary estimates of August inflation.

The EUR/USD pair has spent the week unable to recover beyond the 1.1110 region, where it has the 61.8% retracement of its latest advance measured between 1.1026, the yearly low, and 1.1249, this month high, now surpassing it on US President Trump’s comments smashing the American currency.

From a technical point of view, the pair has room to keep on falling, as, in the weekly chart, technical indicators remain within negative levels, although directionless. The pair is also developing below all of its moving averages, with the 20 SMA gaining bearish strength below the larger ones.

In the daily chart, technical indicators remain well into negative levels, the RSI attempting a modest bounce and the Momentum lagging, still heading south amid the soft daily opening this Friday. Anyway, the 20 DMA keeps heading lower, now converging with the 50% retracement of the mentioned advance at around 1.1136. The 100 and 200 DMA, offer modest downward slopes well above the shorter one. 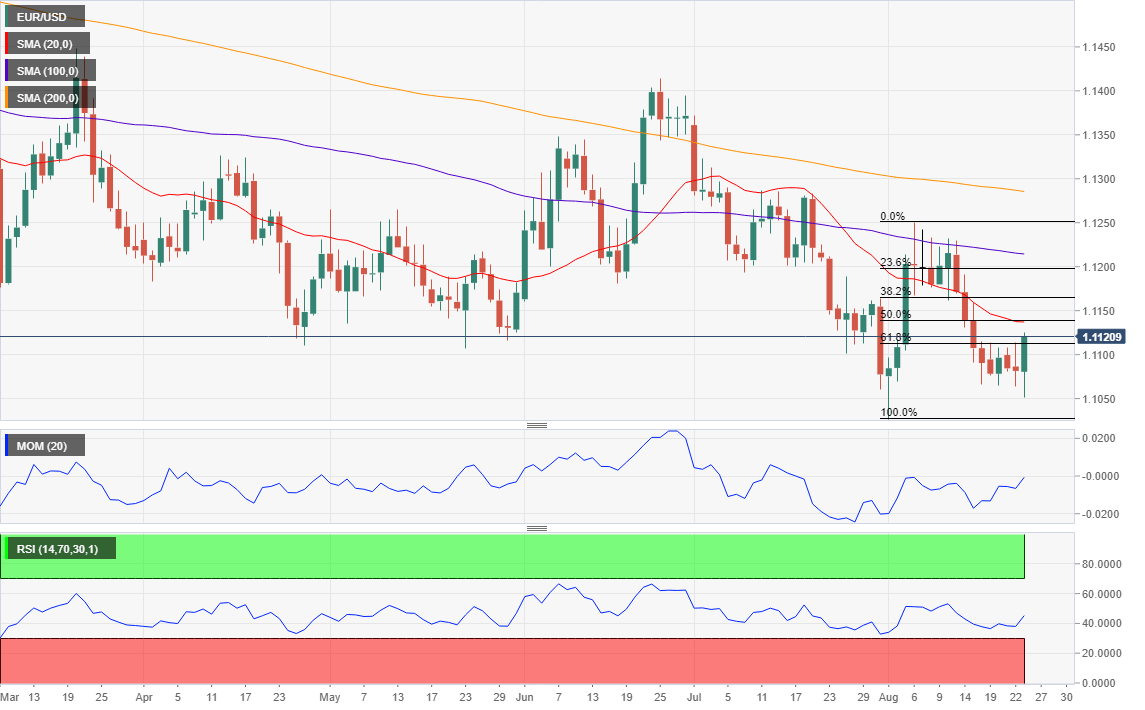 The FXStreet Forecast Poll indicates that investors still see the 1.1000 mark as a critical inflection point, which they are not ready to challenge. In the weekly view, 73% of the polled experts are expecting further declines, with an average target of 1.1007. A U-turn takes places afterward, as bulls dominate the one month and three months perspectives, although the pair is seen then barely above 1.1100 on average.

The Overview chart shows that most likely targets are below the current level, a situation that repeats in the monthly view. In the longer-term perspective, the range of possible targets is wide, from 1.06 to 1.16, reflecting the ruling uncertainty. Worth mention, the moving average have lost their bearish strength in the three time-frame under study.

GBP/USD Forecast: Ready to retreat? Johnson's optimism and Trump's tirades may have gone too far