The EUR/USD pair trimmed the past two weeks’ losses these last few days, now struggling with the critical 1.1000 threshold. To the usual sentiment-related fluctuation, the market had to deal with Q1 Gross Domestic Product data and central bankers.

As expected, growth figures were smashed by the economic stalemate triggered by the coronavirus pandemic. The US economy contracted by 4.1% in the three months to March and according to preliminary estimates. In the Union, the contraction was of 3.3% in the same period, also worse than anticipated.

The greenback has been under selling pressure ever since the Fed’s announcement mid-week, and while the ECB disappointed investors, the decline continued on the back of soft US data and mounting US-China tensions.

Central banks had monetary policy meetings, leaving the current policies unchanged. However, US Federal Reserve chief’s Powell pledged to do “whatever it takes,” to keep the economy afloat. By the end of the week, the central bank expanded access to its Paycheck Protection Program Liquidity Facility to additional lenders and expanded the collateral that can be pledged.

The ECB, on the other hand, made minor twists to its current policy, as it left rates unchanged while easing TLTRO conditions, by reducing interest rates between June 2020 and June 2021. President Lagarde acknowledged the EU is going an unprecedented contraction and that the Union’s GDP may fall between 5%-12% this year, and quite similar to what Powell said, the announced that the "ECB stands ready to adjust all instruments."

Policymakers recognise that the main target today is to keep the economies afloat throughout the pandemic. Outrageous debt levels, inflation, and whatever else will have to wait until the crisis is over. One key economic indicator, however, is being watched around the world. Unemployment figures skyrocketed, particularly in the US.

Initial Jobless Claims for the week ended April 24 printed at 3.84M, bringing the total to over 30M since mid-March when the lockdowns began in most economies and some US states.

Meanwhile, US President Trump has threatened China with more tariffs, accusing the country from miss-handling the coronavirus outbreak. The pandemic has taken over 230,000 lives around the world. Most European countries and some US states are easing their lockdowns, but stand ready to go back to stricter measures if the curves start rising again.

Economies are meant to keep struggling with the current conditions for some more weeks. The light is not yet clear at the end of the tunnel, although several countries are rushing vaccines’ tests and Gilead reported a positive outcome of a trial of its drug remdesivir. In the best-case scenario, however, a vaccine could be ready for September.

Back to employment, the US will publish the Nonfarm Payroll report next week. The record levels of unemployment hint the country could have lost 20 million jobs in April, while the unemployment rate is seen up to 14%. Ahead of the event, the ADP survey on private jobs’ creation is seen printing -13M. For once, the fact that the numbers are being widely anticipated, it does not mean it would be fully priced in.

The EU macroeconomic calendar will be quite scarce, as it will include Markit revisions of April PMIs and March Retail Sales, seen down monthly basis by 10% and by 12% when compared to a year earlier.

The EUR/USD pair is trading a few pips above the 1.1000 level, its highest in a month. The bullish case could become stronger if the pair finished the week above the psychological threshold. Meanwhile, the weekly chart shows that it’s battling with a mild-bearish 20 SMA, while the 100 SMA continues to extend its decline below the 200 SMA, both above the shorter one. Technical indicators have recovered, but are currently dealing with their midlines, lacking enough momentum to confirm additional gains ahead.

In the daily chart, the pair seems poised to extend its advance, challenging a bearish 100 SMA and with the 200 SMA a handful of pips above the current level. Technical indicators have entered positive levels, maintaining their strength upward at their highest in over a month. The 1.1040/50 area comes as the immediate resistance, followed by 1.1120 and 1.1160. Supports, on the other hand, are located at 1.0920 and the 1.0860 region, while below this last 1.0790 comes next. 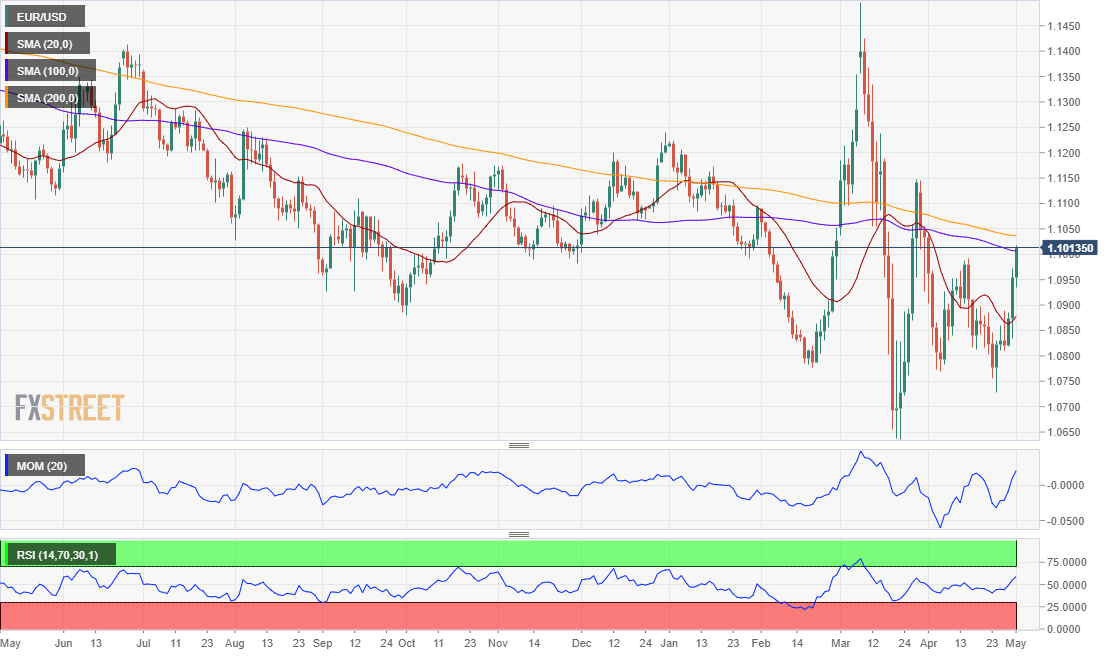 The FXStreet Forecast Poll is showing that speculative interest doesn’t believe the ongoing recovery could last long. Bears are a majority in the three time-frame under study, with over 60% of the polled experts willing to sell in the next few weeks. The quarterly perspective shows that most investors are sideways, with bears at 36% and bulls just at 21%. On average, the pair is seen around the 1.0900 level.

The Overview chart reflects the ongoing recovery, as moving averages have turned north. However, they all stand below the current level. Overall, there’s a wide spread of possible targets, which partially distort the averages. Nevertheless and with quite a few exceptions, the pair is not seen far above its current levels in the upcoming weeks.