"Effectively a new pandemic" – that is how German Chancellor Angela Merkel has described the spread of the British variant in Europe's largest country. The B 1.1.7 strain had already wreaked havoc in several other countries and has now brought Berlin to announce a strict lockdown around Easter, and an extension to other measures through April 18.

Europe's economic "locomotive" is now derailed while most of France and Italy are also under more severe restrictions, delaying the recovery. Moreover, vaccinations remain sluggish despite an improving political climate The British government is trying to calm EU officials with overtures regarding the distribution of AstraZeneca's doses. UK Prime Minister Boris Johnson's moves come after Brussels threatened an export ban.

However, hopes that Astra's immunization solution has received a dose of calm have been shattered again. One day after the embattled pharmaceutical firm reported a successful Phase 3 trial in the US, authorities in Washington released a statement expressing concern about some of the data submitted by the company, saying it is outdated.

The damage to AstraZeneca's reputation has already been done, with more Europeans set to reject the jabs. On this background, it would be hard for the euro to recover.

On the other side of the Atlantic, President Joe Biden's administration is set to present infrastructure spending plans worth around $3 trillion – on top of the covid relief plan worth $1.9 trillion that is being deployed. Additional spending means a hotter economy and also elevated debt issuance – and a potential rise in yields makes the dollar more attractive.

Treasury Secretary Janet Yellen and Federal Reserve Chair Jerome Powell are slated to appear before Congress later in the day and discuss efforts to support the economy in the crisis. Powell's prepared remarks were already released and they echo last week's rate decision.

The Fed will continue supporting the economy, seeing through temporary inflation rises and the unemployment rate, which understates real labor conditions. Republican lawmakers are set to raise inflation concerns.

US New Home Sales figures for February will probably show ongoing high demand in the construction sector, similar to Existing Home Sales statistics, while Powell's colleagues at the FOMC will probably reiterate the Fed's recent messages.

All in all, there is room for yields to resume their gains and the dollar to rise. 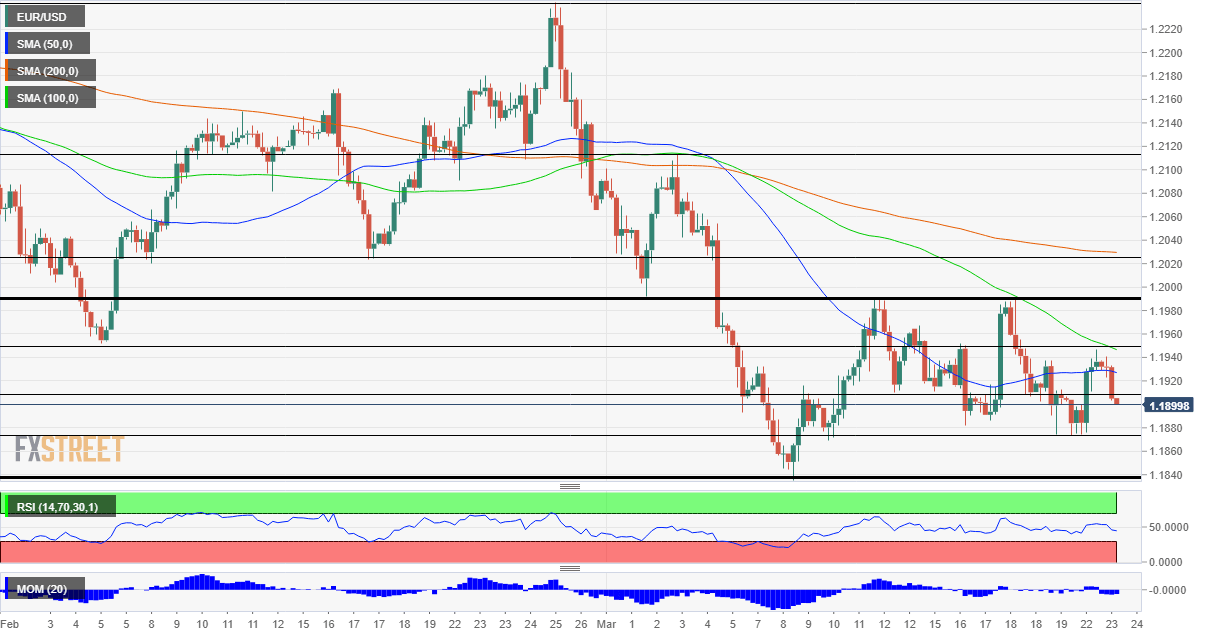 Euro/dollar has slipped back below the 50 Simple Moving Average on the four-hour chart and momentum has turned to the downside once again – both bearish developments.

The gold price has been trading between support and resistance on the daily chart. XAU/USD is trading lower, having fallen from a high of $1,844.69 to a low of $1,837.73. The yellow metal is trading near a one-week high made in the prior session.