A pandemic disrupted financial markets and the global economy in 2020, and the greenback is the overall loser. The EUR/USD pair has reached levels last seen in 2018, not far from that year´s peak at 1.2554. After almost a year of pessimism, investors are stubbornly optimistic, with Wall Street trading at record highs. And this is taking place just a few months after major economies posted their largest economic contractions in decades.

EUR/USD price news: What happened? How did it happen? And what’s next?

Never ever did we imagine that throughout 2020, we would become experts in immunogenicity nor anticipated all the twists and turns on how a vaccine is developed and approved.

By the end of 2019, a novel coronavirus that originated in China was below the radar. Three months later, it flooded the world and it was too late to do anything to contain it. Firstly arrived in Italy, it quickly jumped to the US, with the epicenter in New York. The world halted. Lockdowns failed to contain the spread and were just enough to partially control the virus. But the harm to economies was already done. The global Gross Domestic Product collapsed in the second quarter of the year, with some economies doing better than others.

Panic didn’t help the dollar, probably due to how the US government handled the pandemic, as, beyond strict restrictions in New York at the beginning, US President Trump refused to put the economy on hold. The illness was politicized. The cost of Trump’s decision was over 18 million people infected and roughly 325,000 deaths. It also cost him the government, as he lost the re-election to Democrat rival Joe Biden.

As 2020 comes to an end, several vaccines are getting emergency approval and the first-world population started to receive life-saving injections. Massive shooting is still far away, as well as knowledge over their effectiveness. Social distancing, face-masks and remote working are part of a new normal that will likely continue through 2021.

Consumption has suffered a huge shift. Restrictive measures have left the world without leisure activity. And the global cost could be counted by billions. Small and multinational businesses went bankrupt, and that even after central banks flooded markets with massive easing. True, economies rebounded in Q3, but the path to pre-pandemic levels will be long and painful, amid income inequities and extreme poverty levels, particularly in the third world.

The ECB and the Fed, the battle of two giants

In March, central banks embarked on large-scale emergency programs to counter the negative effects of the pandemic on the economy. The US Federal Reserve announced it would purchase at least $700 billion in assets over the coming months with no limit. On its December meeting, the Fed maintained its ultra-loose policy and announced it would prolong it “until substantial further progress” is being made toward employment and inflation goals. In between, the central bank adopted an average inflation target, which will allow them to keep the interest rates even if inflation surpasses the 2% objective. Rates are expected to remain at a record low for the next couple of years.

The European Central Bank announced an initial €120 billion package, and right afterward, a new Pandemic Emergency Purchase Program (PEPP) of €750 billion until the end of the year. The PEPP was expanded in June to €1.35 trillion through at least the end of this same month in 2021. In their December meeting, European policymakers once again expanded their stimulus program to €1.85 trillion while extending purchases until March 2022 at the minimum.

Monetary stimulus is here to stay and not just in Europe and the US. Major banks from around the world have adopted similar measures. The pace of monetary stimulus will remain high as long as economies struggle with the virus and restrictions. An economic comeback could mean decreasing stimulus for 2021 and Wall Street may take the hit.

Faith in the global recovery

In the EU, the number of employed persons fell by 2.8% in the second quarter of the year and increased by 0.3% in the three months to September. As for the US, the country lost around 22 million jobs between March and April and managed to recover roughly half of those between May and November.

The second wave of contagion has hurt the two economies equally ever since the summer ended, resulting in fresh restrictions of different levels in the US and Europe. Still, vaccine supply will likely throttle economic recovery and jobs. Goldman Sachs launched a report indicating that a 50% vaccinated population “looks realistic in April for the US and UK, May for Canada, June for the EU and Australia, and July for Japan.”

The world is betting on an economic comeback for mid-2021. It is possible but inequities will persist. Reaching pre-pandemic employment levels is outside the foreseeable future, while inflation does not even worth mentioning. Depressed consumption will likely keep it subdued for longer than the most pessimistic central banks’ estimates.

Anyway, optimism reigns in the wider perspective and despite the market’s turmoil that spurs safe-haven demand here and there.

Before the pandemic took the world by storm, trade tensions between Washington and Beijing were the center of the universe. Would this retake the focus of attention once the world moves back to normal? It’s possible.

US President Donald Trump has become one of the only four incumbents not to get reelected. While he still refuses to concede victory to his rival, the Electoral College has declared Democrat Joe Biden the elected president.

Among the first things Biden said was that he would keep the pressure on China and fight unfair trade practices. He nominated Katherine Tai to become the next US Trade Representative. Joe Biden said that “trade will be a critical pillar in our ability to build back better and carry out our foreign policy – foreign policy for the middle class.”

Worth noting a weaker currency is not always a bad thing. A frail dollar could contribute to a faster US recovery. The opposite is also valid, with an expensive currency anchoring economic progress.

The shared currency recovered between March and December most of the ground lost in roughly two years. The EUR/USD pair has been on a bearish trend ever since touching1.2554 in February 2018. It was all downhill from there, with the pair hitting on March this year a multi-year low of 1.0673. The subsequent recovery has left the pair at levels that were last seen in April 2018.

In a much wider perspective, bears have dominated EUR/USD since July 2008, when the pair hit 1.6036. A descendant trend line from such a high has been broken in the last few months, but only in December, the pair gained enough momentum to confirm the bullish breakout. The next logical target comes at 1.2554, and additional gains beyond this last will signal a long-term bullish continuation. If bulls manage to push the pair beyond this last, the 1.2750 price zone is the next in line, as the pair has several monthly lows around it.

Bulls will get discouraged if the pair loses the 1.2000 threshold, but won’t give up unless the pair falls below 1.1600 in the first quarter of the year, as it will return to levels below the long-term trend line. In such a case, lower lows will come into play, with the pair poised to extend its decline towards 1.0351, the multi-decade low posted in December 2016. 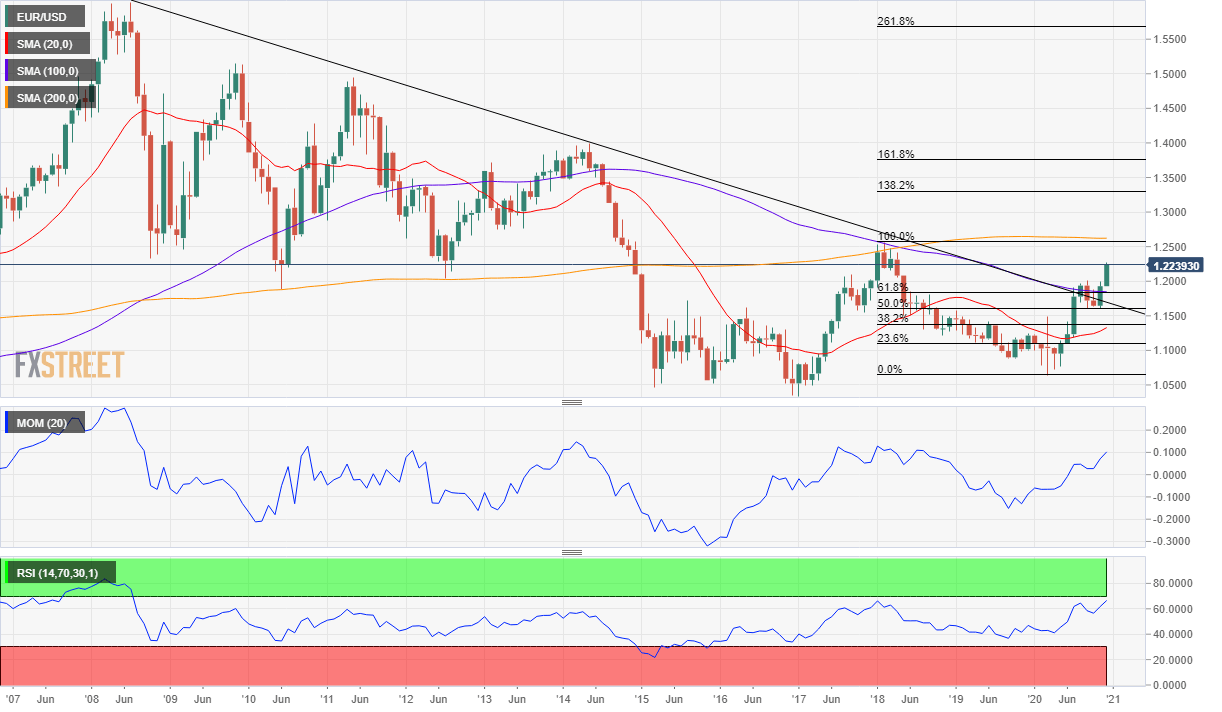 Gregor Horvat projects a bearish correction for the euro/dollar pair on his Elliott Wave analysis:

EURUSD is recovering, but this still can be a corrective rise in wave X), triangle or higher degree three wave structure towards 1.300. The idea is to see limited upside in 2021, even if just temporary since we think that stocks can come lower next year. 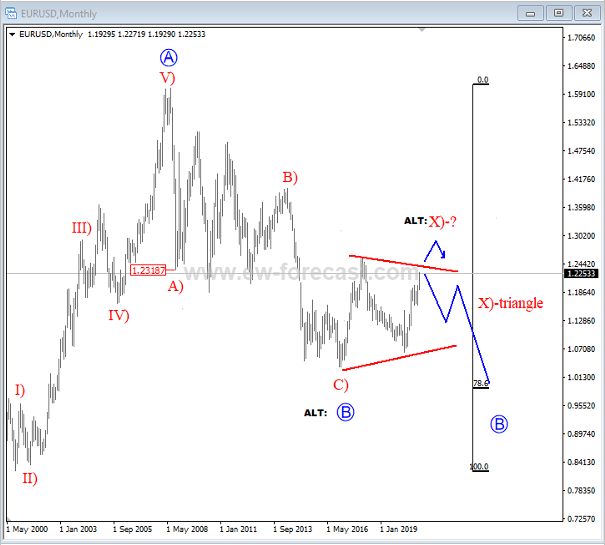 We believe that the prospect of effective coronavirus vaccines, combined with a Biden Presidency in the US, may keep the dollar under selling interest. Biden is likely to adopt a softer stance on trade than Trump, which could boost risk sentiment, and thereby bring safe-havens, like the dollar and the yen, more selling pressure.

The Fed's easing policy can be extended to considerable period of time and it has the ability to do on contrary with other less-flexible central banks which face difficulties at the current historical low rates. By a way or another, it can twist again its current holding of governmental debt into longer period debt and it can increase its purchasing and widen its balance sheet further, while the financial policy in US is expected to give further support to boost the economic expansion momentum in the wake of coronavirus by more reflation plans. So, it looks that we are ahead of further floods of cheaper money supply to boost the economy and raise the prices of assets.