The US money machine has been warming up – and global markets are heartened. Investors are awaiting President-elect Joe Biden's first moves in the White House with high hopes, pushing the safe-haven dollar down.

Janet Yellen, the nominee for Treasury Secretary, has made the case for going "big" on spending to stimulate the world's largest economy, still reeling from the coronavirus crisis. After America passed the grim milestone of 400,000 COVID-19 deaths, the former Federal Reserve Chair has urged Congress not only to approve her candidacy but also back the big $1.9 trillion spending bill. In a wide-ranging hearing,

Yellen also said that markets should determine the value of the dollar – moving away from the strong dollar policy. While her main points were already published ahead of the Senate hearing, she made a convincing case – and also refrained from committing to imminent tax hikes that Wall Street dislikes.

Looking ahead at Inauguration Day, fears of violence from supporters of outgoing President Donald Trump may be somewhat hiding investors back. However, the focus is on what Biden does in his first hours and days at the White House. According to reports, he is set to rush in a flurry of Executive Orders.

Will some of them have an immediate economic impact? The No. 1 issue is the pandemic. A call to wear face masks and a boost to America's vaccination campaign would be welcomed while trying to force states to shutter would weigh on markets.

More US-China Relations and the Biden Administration: Trade war over but you can't go home again

On the other side of the pond, tensions are rising ahead of Thursday's European Central Bank decision. The Frankfurt-based institution is set to leave rates unchanged but may warn about the higher exchange rate of the euro. Without cutting rates, any attempt by the ECB to talk down the common currency will likely be futile.

However, Bloomberg reported that the ECB could launch a strategy of controlling yield spreads – leveling down borrowing costs between different economies. While lowering returns on European debt may weigh on the euro, it would lower borrowing costs for some governments, a positive development.

See ECB Preview: Lagarde may trigger a “buy the dip” opportunity by trying to talk down the euro

Also in the old continent, Germany extended its lockdown through February 14 while Italy's government survived its political crisis. The common currency is somewhat dragged down by the slow pace of vaccinations, especially as Biden intends to ramp up America's immunization scheme. 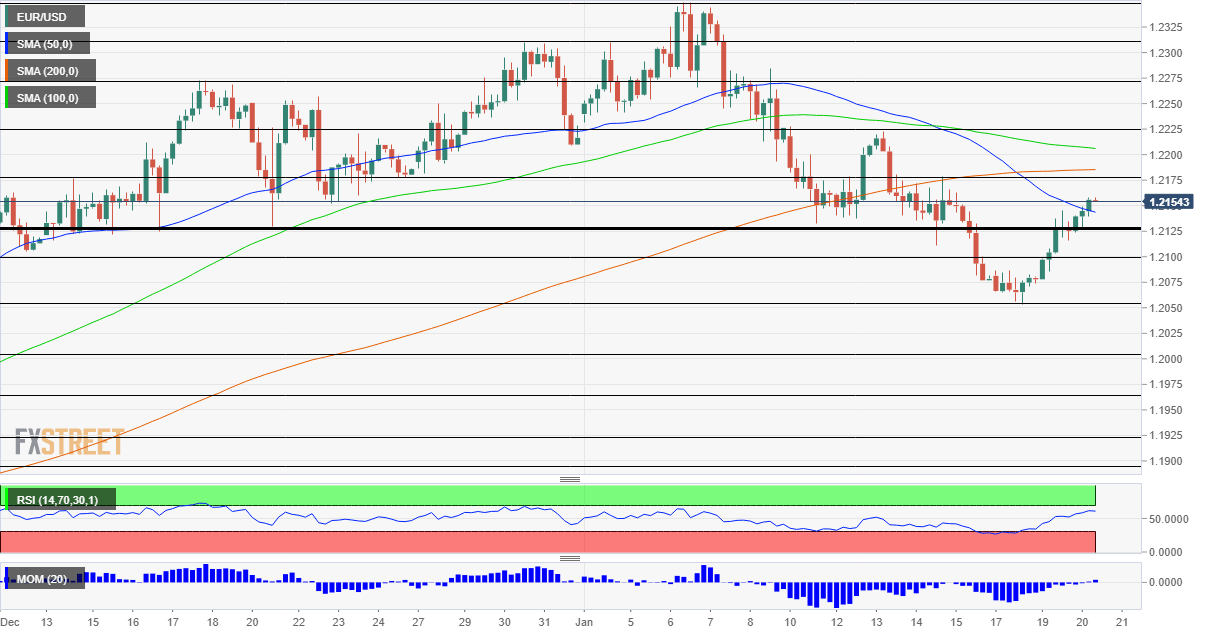 Momentum on the four-hour chart has turned positive, a bullish sign. Euro/dollar has also surpassed teh 50 Simple Moving Average. However, the currency pair remains below the 100 and 200 SMAs.

All in all, bears are in retreat, but have not given up yet.