The AUD/USD lost ground for the third week in a row, pummeled by broad US dollar strength and a return of the COVID risk aversion trade. Austria instituted a partial lockdown and Germany contemplated a return to restrictions amid rising case counts that defy high vaccination rates in both countries.

A potential rate divergence surfaced with the US Federal Reserve moving towards rate hikes in 2022 and the Reserve Bank of Australia (RBA) expecting none. On Tuesday, RBA Governor Philip Lowe noted that  "the economy and inflation would have to turn out very differently from our central scenario for the Board to consider an increase in interest rates next year."

Chinese property market woes continued with negative implications for the mainland and Australia’s resource based economy. The US rating agencies Moody’s and S&P expressed concern about the status of China Evergrande Group, with the latter considering a default “highly likely” at some point.

The AUD/USD fall was contained on Friday by the upward support line at 0.7240 that extends back to late August but the pair has lost 3.4% this month and 1.2% this week. 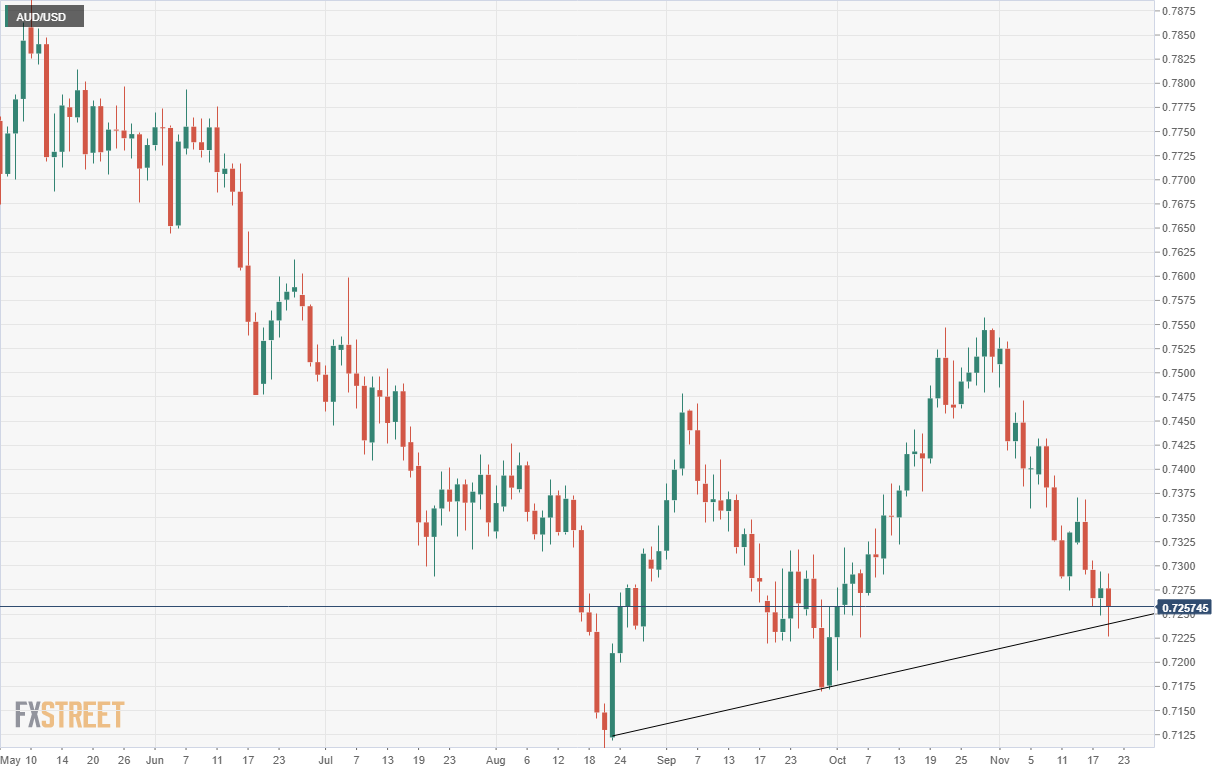 Australian economic information provided little this week to counter the strong results from the US.

The excellent US Retail Sales report combined with a Consumer Price Index (CPI) at its highest level since 1990, should keep the Fed on track to end its $120 billion bond buying program on schedule by June 2022. Evidence of a strengthening recovery may be sufficient for the Federal Open Market Committee (FOMC) to advance its taper timetable at the December 15 meeting.

Fundamental and technical factors do not favor the aussie. While higher US interest rates are mostly speculative, the Fed is officially behind ending its emergency interventions and has projected at least one fed funds hike. Meanwhile, Governor Lowe’s prediction weighs on the aussie.

The US economy appears to be accelerating in the fourth quarter after a weak 2% performance in the third. The Atlanta Fed GDPNow estimate for the final three months is currently running at 8.2%.

The US 10-year Treasury yield lost 4 basis points on Friday, largely on media notice that President Biden will announce the new Fed Chair this weekend. Current Chief Jerome Powell is considered the favorite but Governor Lael Brainard has been mentioned in the media as a long-shot. She is generally thought to be a bit more dovish hence the drop in Treasury rates.

Australian Retail Sales for October due on Friday will not change the economic scenario.

American information is heavily loaded on Wednesday before the Thanksgiving holiday on Thursday. Durable Goods Orders for October should confirm the excellent Retail Sales release. The first revision to third quarter GDP may offer a slight improvement. Better results will support the dollar.

The bias in the AUD/USD is lower with scant support ahead of the year’s low.

The MACD (Moving Average Convergence Divergence) cross of the signal line on November 2 remains the dominant technical condition. The steady differential between the two lines indicates a negative tendency. The Relative Strength Index (RSI) has moved lower since November 12 but has not entered oversold status suggesting there are more losses ahead.

The FXStreet Forecast Poll is bearish but expects the September low at 0.7174 to hold.

NZD/USD is regaining upside traction and heads back towards 0.6400 following the RBNZ's expected 50 bps rate hike decision. The kiwi cheers the central bank's upgraded OCR projections. Next of relevance remains the Fed minutes.

AUD/USD extends losses below 0.7000 after Australian wage price data disappointed. Softening wage growth data could lead the RBA to slow down its policy tightening. The US dollar consolidates the previous sell-off ahead of the FOMC minutes.