The AUD/USD pair has advanced for a second consecutive week, settling above the 0.7000 threshold weekly basis for the first time since late April. The advance was the result of broad dollar’s weakness, as the Australian and Chinese macroeconomic calendars were empty, without providing directional clues for the Aussie. Commodities were also responsible for the pair’s advance as spot gold traded as high as $1,439.14 a troy ounce, its highest in over five years, while crude oil prices were also higher. Both appreciated on the back of trade tensions between the US and China, and geopolitical ones between the US and Iran.

News coming from the trade war front were mostly supportive of the bullish movement, as US Treasury Secretary Mnuchin said that 90% of the deal is done, as teams from the US and China met to discuss a possible deal ahead of the Trump-Xi Jinping meeting within the 20-G Summit this weekend. Despite there are little chances that both countries will reach an agreement, this temporary truce is giving markets a sense of relief.

Equities, however, didn’t perform as well, as US indexes are poised to close the week little changed on the downside, weighed by political and economic uncertainties.

The weekend events could trigger some weekly-opening gaps as not only the G-20 Meeting is taking place in Japan, but also the EU Summit will take place, and politicians may well announce the next ECB’s President, as Mario Draghi’s mandate finishes in October.

Australia will release the AIG Performance of Manufacturing Index for June and May Retail Sales these days, although the focus will be on the RBA monetary policy meeting this week. Seems unlikely Lowe & Co. will move rates after cutting them in May, but further rate cuts have been anticipated, and policymakers may pave the way in that direction.

As for the dollar, the ongoing weakness is set to persist, although the American currency can find some support by the end of the week in the NFP report.

The advance seems corrective in the weekly chart, with the pair still depressed and developing within a long-term bearish trend. In the mentioned chart, it approached by stalled below the 20 SMA, while the 100 and 200 SMA converge over 400 pips above the current level, while technical indicators have recovered further within negative territory.

In the daily chart, the potential of additional gains seems clearer, as the pair has steadily advanced above its 20 DMA, now some 20 pips away from the 100 DMA, this last at around 0.7040, the immediate resistance. Furthermore, the Momentum indicator advances slowly but steadily above its mid-line, while the RSI is currently losing bullish strength, but consolidating around 62. 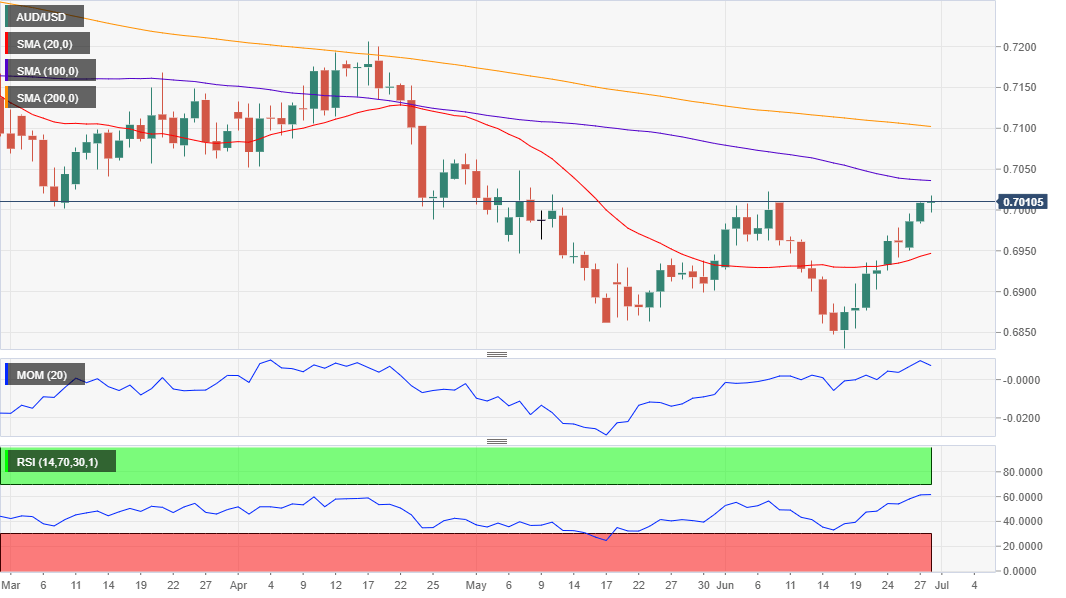 According to the FXStreet Forecast Poll, the AUD/USD pair is seen extending its gains next week, something generalized throughout the poll, a sign of dollar’s weakness rather than sudden demand for the Aussie. The Overview moving averages are sharply bullish, yet the average target price for the upcoming week is 0.7031, barely above the current level, confirming that the bullish sentiment is a result of dollar’s dislike.

In the monthly and quarterly perspectives, bears are a majority of 57% and 52% respectively, although the average price is stuck in the 0.6975 price zone, indicating no interest for any of both currencies.