The EUR/USD pair is finishing the week with modest gains, still at levels last seen mid-March. The dollar is still paying the price of a dovish Federal Reserve, although the shared currency gains were limited by the fact that the ECB has also taken the conservative path, in fact, a few weeks ahead of the Fed. The positive momentum of the pair extended up to 1.1411, pulling back from the level Tuesday, as a couple of Fed officials surprised with not-so-dovish words. St. Louis head’s Bullard said that he thinks that a 50 basis point cut would be “overdone,” adding that such a move would be an “insurance” move. Later, it was the turn of Fed’s Chief Powell, who also referred to a “preventive”  rate cut, remarking the good shape of the local economy, and blaming the decision on uncertainty about trade and worries about the global economy. The retracement from highs was quite limited,  with buyers aligned in the 1.1350 region.

The American dollar not only suffered from central bank’s woes, but also from mounting geopolitical tensions between the US and Iran, and a modest improvement in the market’s mood, as China and the US agreed to discuss their trade issue within the G-20 Summit that will take place this weekend. US Treasury Secretary Mnuchin said that the trade deal between the two economies is “90 percent completed,” yet hopes that they will reach an agreement are limited.

Data released throughout the week was mixed, with no impressive figures enough to build up directional momentum. The German IFO survey showed that the Business Climate improved in June, although expectations deteriorated further. The EU Economic Sentiment Indicator deteriorated in June, down to 103.3 from 105.2, in line with the negative economic outlook.

Both economies provided inflation updates in the last trading day of the week, with EU core CPI raising 1.1%, better than the 1.0% forecast. US core PCE inflation in May remained unchanged at 1.6%. None of them was a game changer for central bankers.

What’s next in the macro front

There a couple of relevant events that will take during the weekend that can affect the pair’s behavior next week. One is whether the US and China could get closer to a deal, or not. The other is the EU Summit. European politicians could decide and announce the name of the upcoming authorities, included Draghi’s successor. Fears are that Jens Weidmann, president of the Bundesbank, Germany’s central bank, could be the chosen one, as he is clearly opposed to Draghi’s innovations on monetary policy. A surprise shift in monetary policy is usually bad news for a currency involved.

The following days will also provide relevant economic background, as, on Monday, Markit will release the final versions of Manufacturing PMI for both economies, while the US will release the official ISM Manufacturing PMI, foreseen at 51.5 vs. the previous 52.1. On Wednesday, it will be the turn of the services indexes for both economies. The star of the week will be the US Non-farm Payroll report to be out next Friday.  June employment data will be critical for the dollar, as May´s awful headline was in part responsible for the latest USD decline. Employment creation is expected to have rebounded, with 158K new jobs expected, alongside an unchanged unemployment rate of 3.6%.

The EUR/USD pair retains its bullish stance, as this intra-week dips were quickly reversed around the 23.6% retracement of the latest bullish run. In the weekly chart, the pair held above the 200 EMA which broke in the previous one, while the Momentum indicator entered positive ground, still holding in neutral levels. The RSI, in the meantime, lacks directional strength around 53, skewing the scale toward the upside without confirming it.

In the daily chart, the pair bounced several times from around a mild bearish 200 DMA, while the 20 DMA crossed above the 100 DMA, both well below the current level. Technical indicators corrected extreme overbought conditions, with the RSI currently consolidating at around 63, and the Momentum is attempting a recovery after nearing its mid-line, all of which suggest that bulls retain control. 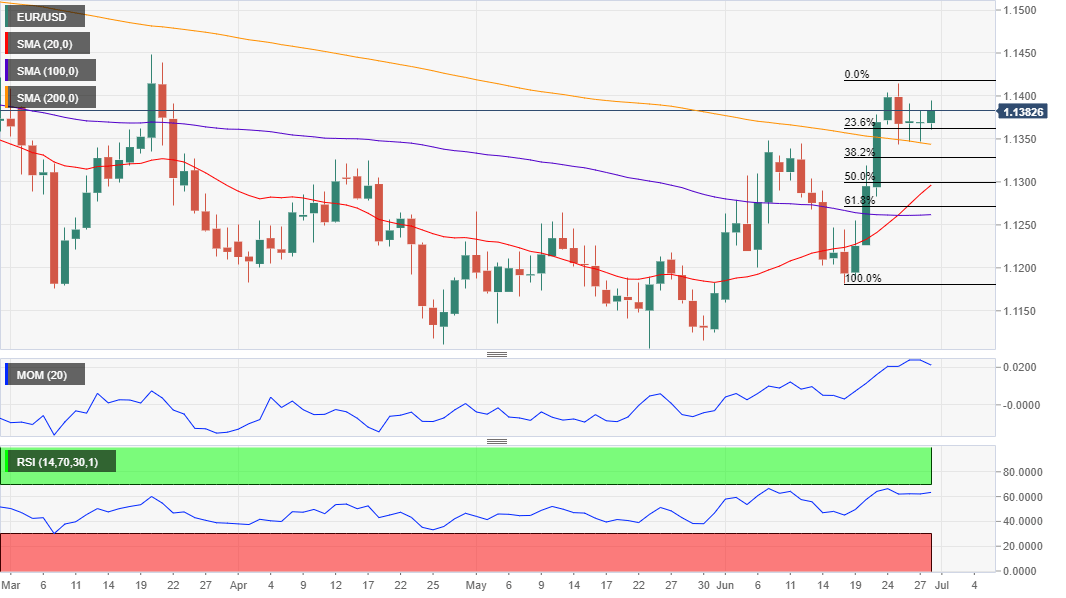 The FXStreet Forecast Poll shows that bulls are in control of the EUR/USD pair, at least in the short-term as the pair is seen holding close to 1.1400. The positive sentiment suffers a U-turn monthly basis, as 69% of the polled experts foresee lower targets, averaging 1.1253. In the quarterly view,   bears are also 69% vs. just 20% of bulls, with the pair seen then on average at 1.1277.

The Overview chart shows that the short-term moving average is sharply bullish, yet almost flat in the longer perspective, rather on uncertainties weighing on economic developments than any kind of directional conviction.