The only edge is eroding away – President Donald Trump received has better notes than rival Joe Biden only on the economy while trailing on everything else. That advantage is narrowing or disappearing – and voters have good reasons.

A Washington Post/ABC poll showed Biden and Trump neck to neck at 47% among registered voters when asked who would better handle the economy. A Quinnipiac survey revealed that more voters prefer Biden – 50% to 45%. Both polls were taken in mid-July.

Why is Trump losing his economic edge? The main driver is his catastrophic handling of the coronavirus crisis but was never outperformed his predecessors even before the crisis.

The 2017 Trump tax cuts – the only legislative achievement – provided a windfall for companies and for wealthy Americans, including the president. Did they help the economy? The president took a victory lap when annualized Gross Domestic Product exceeded 4% in the second quarter of 2018.

And that was it. The economy returned to the "new normal" of slow and steady growth.

The effect of the tax cuts faded out so quickly, that when approaching the November 2018 mid-term elections – only four months after that bumper quarter concluded – the policy became unpopular so much so that Republican candidates stopped talking about them.

As an aside, Democrats focused on healthcare – making Obamacare great again and flipping the House. Trump and his allies failed to "repeal and replace" his predecessor's eponymous flagship policy and have never presented an alternative program to preserve the protection of those suffering from pre-existing conditions. Health issues continue to weigh on the incumbent.

Back to GDP, during President Barrack Obama's time, quarterly expansion outpaced that 4% growth level three times – the last time in the third quarter of 2014, with GDP rising by 5% annualized.

Is Trump good for the economy?

Overall, similar to his suggestion to inject disinfectants against COVID-19, Trump failed to create miracles for the economy. A multi-bankrupt businessman was, apparently, no genius when it comes to the economy.

Trump boasted that the jobless rate reached the lowest in 50 years, but the following charts only show that the downtrend was already there:

Obama did the heavy-lifting after the financial crisis, bringing it from around 10% to a 4.8% in January 2017 upon leaving the White House. The current occupant of the Oval Office did not face a jobs crisis like that endured by Obama, nor Bill Clinton in 1993.

Here is another chart, showing the 2008-2009 recession in gray and the long decline of unemployment, through January 2020, just before the coronavirus crisis.

Voters' loss of trust in Trump's economic capabilities comes in the wake of the coronavirus crisis. After dismissing the disease for a critical two months – despite dedicating energy to China throughout his presidency – the president came to grips with the virus and worked to mitigate it in mid-March.

The White House's guidance on social distancing and overseeing massive fiscal stimulus – driven by Democrats – pushed the president's approval ratings to the highest since 2017.

However, Trump quickly relinquished his leadership role and took a political gamble – pushing for a return to normal in an attempt to cling onto his economic advantage – ignoring the warning signs. The president tweeted LIBERATE to fuel protests against lockdowns and undermined his own guidance regarding easing restrictions.

Alongside fiscal stimulus, the reopening boosted the economy in May and through mid-June – encouraging the president even though polls had already reverted to the pre-leadership levels. Trump's readiness to gamble with people's lives for his reelection failed to convince.

However, that hasty nudging of governors and citizens – some urged by Fox News – to return to normal turned into a disaster. Coronavirus cases, positive test rates, hospitalizations – and unfortunately deaths – all began rising. Consumers began hunkering down even before governors halted the reopening or reimposed limitations.

While some may argue if this is the second wave of COVID-19 or an extension of the first one, for the economy, it is a second downturn – and a more devastating one.

In the first shock, consumers and businesses saw it as temporary, lowering the heads to avoid danger while the spread stops and better systems were put in place. Stores that held along with help from authorities, adjustments, and digging into savings may now throw the towel as they lose confidence.

The University of Michigan's preliminary consumer sentiment gauge for July points to a downturn – in line with Trump's loss of his economic edge in the polls.

As the chart shows, there is no V-shaped recovery, nor a "rocketship" one. The reopening undermined the recovery.

Economically, it would have been better for Trump not to take the reopening gamble and lead to depressing the disease. The economy would have done worse in May and June but recovered faster afterward.

Politically, that would have been wiser as well. Leaders that took the disease seriously – and not in a self-centered prism – have seen their approval ratings surge. That includes those whose response was not necessarily effective, such as UK Prime Minister Boris Johnson or his Swedish counterpart Stefan Löfven.

An American example is George W. Bush. Less than eight months after entering office, Bush faces a severe crisis – 9/11. While his decisions to invade Afghanistan and Iraq are questionable – American troops are still there – he was able to unite a divided nation that was licking its wounds from the fraught 2000 election.

Republicans won the 2002 mid-terms – unusual for an incumbent party. Even after the invasion to Iraq yielded no Weapons of Mass Destruction and the war proved costly, Bush was reelected, this time also winning the popular vote.

Trump, elected despite trailing by nearly three million votes, has almost no chance of winning the popular vote:

Trump's loss of his economic edge may prove temporary – if he attempts to lead and ceases to divide the nation. The president made an abrupt U-turn and encouraged wearing face masks in public. This low-hanging fruit for economic recovery may help.

The next step would be backing another massive fiscal relief and stimulus package. The upcoming expiry of federal unemployment benefits poses a substantial risk to the economy and so do other plans which run out shortly. 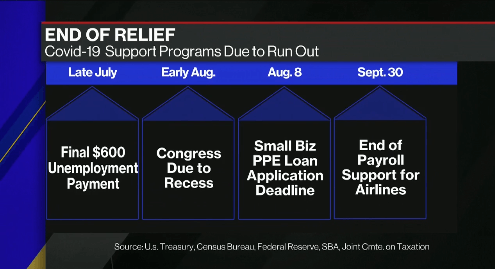 It does not take a sophisticated election adviser to know that benefiting the people – or throwing money – is what the ruling party should do ahead of the elections. Pushing for extending relief in some form makes perfect sense a drive-by Trump to extend these benefits could help his economic standing.

On the other hand, falling off the fiscal cliff would inflict severe economic pain and is akin to political suicide. While the chances are low, stranger things have happened.

Further fiscal stimulus gives Trump a chance at recovering the economy and his standing on it. Will that be sufficient to squeeze another win? Will he be able to stay the course or revert to his usual self? These are open questions.

Trump is bad for the economy but good for stocks

Will also Wall Street become disillusioned with Trump the same way voters are? That mostly depends on Republicans holding the Senate, in a battle which is up for grabs.

Investors have cheered the tax cuts mentioned above, Republicans' deregulation drive, and promises to do more on both fronts. Moreover, stocks are driven by central banks more than by anything else. Trump nominated Jerome Powell as Chairman of the Federal Reserve and that has proved favorable for markets.

Powell makes his dovish predecessors look like fierce hawks. The Chairman oversaw massive bond-buying worth around $3 trillion  – including "fallen angels," or debt recently marked as junk. Here is the Fed's balance sheet:

Unlimited Quantitative Easing and a slew of plans were accompanied by a paradigm shift – the Fed will not attempt to be ahead of the curve. The central bank moved from trying to preempt potentially higher inflation with waiting for it to fully materialize. Keeping interest rates lower for longer almost turned into eternity. In Powell's words "we are not even thinking of thinking of raising rates."

More S&P 500: Five charts to explain the comeback and why coronavirus carnage may crash it again

On this background, Wall Street will likely be receptive to Biden – at least as long as the left-wing of the Democratic Party is unable to enact sweeping reforms. However, with Trump's mishandling of the virus and the economy, the chances of a clean sweep by Dems are growing.

President Trump is losing the one field in which he led – the economy. That advantage was based on perception unrelated to reality and his failure to handle the coronavirus crisis is exacerbating that edge. Voters have good reasons to mistrust the incumbent, also on the economy.

Gold not out of the woods yet, focus on US PCE inflation

Gold price fell on Thursday after witnessing yet another day of choppy trading while maintaining familiar levels below the $1800 level. The up and down moves could be largely associated to the Fed’s expectations on the monetary policy.