Let’s talk about GameStop (GME) because the stock has gone absolutely crazy.

I mean, yesterday, January 25th, it was up 144% before swinging into negative territory. Then it reversed again and closed up more than 18%.

Update from the Editor on Friday: Well the stock has indeed gone crazy and it keeps getting crazier! Gamestop (GME) collapsed on Thursday as trading restrictions from several brokers hit the stock. GME closed on Thursday down 44% at $193.60 falling from a high over $500 in Thursday's pre-market!

Ted Cruz, Alexandria Ocasio-Cortez and Elon Musk, among others, all tweeted demanding to know the reasoning behind restricting trading in the stock. Robinhood was served with two class-action lawsuits and Citadel was forced to release a statement saying it had no influence on the decision to restrict trading. All in all, a giant mess.

Robinhood backtracked on Thursday night saying it planned to allow “limited buys of these securities”. The company also released a statement on Thursday saying “As a brokerage firm, we have many financial requirements, including SEC net capital obligations and clearinghouse deposits. Some of these requirements fluctuate based on volatility in the markets and can be substantial in the current environment. To be clear, this was a risk-management decision, and was not made on the direction of the market makers we route to.”

Gamestop (GME) shares are currently trading at $416 during Friday’s pre-market session, a rise of over 100%.

Update from the Editor on Thursday: The entire world  – including the White House – is watching the next moves in GameStop Corp.(NYSE: GME). The sensational stock is now seen as emblematic of a late-stage rally in Wall Street. Investors fear that the skyrocketing of so-called "meme stocks" is a sign of exuberance that is pointing to a broader market crash. Jerome Powell, Chairman of the Federal Reserve, was asked about Gamestop in his post rate decision press conference. He refused to answer and in general, said that his focus is on the economic recovery, which "has a long way to go." Has Powell allowed for more gains? Perhaps, but at least in Thursday's premarket trading, GME shares are down some 10% to around $310, showing that some of the wallstreetbet traders are willing to take profits off the table. More  What is happening to GME stock today?

Update from the Editor on Wednesday: GameStop Corp.(NYSE: GME) has hit the high of at least $348 in Wednesday's premarket trading, up by over 100% and volatility remains elevated. The media attention around the stock has been rising as Tesla's Elon Musk tweeted about it and ahead of the Federal Reserve's decision. CNBC has reported that Melvin Capital, one of the firms shorting GME, has closed out on its position. The hedge fund is reportedly struggling to shore up its finances. The battle with an army of retail traders organizing on Reddit's Wall Street Bets forum is closely watched.  At the time of writing, Gamestop's shares have been extending their decline from the highs but remain substantially above Tuesday's closing price of $147.98. Reports suggest that Citron covered its majority GME shot at a loss, quoted "in the $90s." More: Gamestop (GME): Should I buy or should I sell Gamestop now?

One month ago, it was trading around $20! 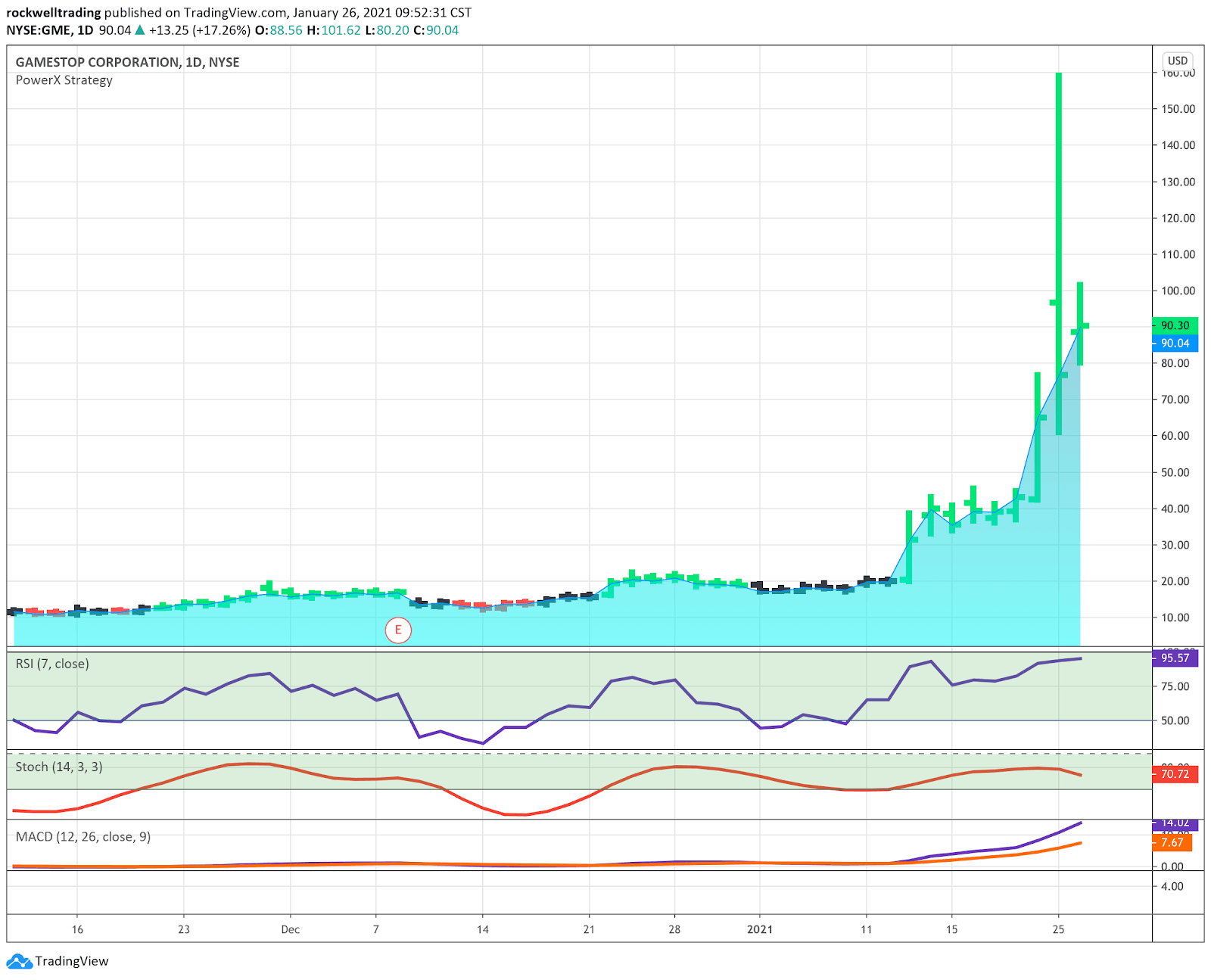 So, today, I want to look at exactly what’s happening with GME, and let you know if it looks like a good time to buy the stock.

What is Happening with GME?

GME made its first big move in mid-January after adding Ryan Cohen to its board. This guy is the co-founder and former CEO of Chewy (CHWY) — the online pet supplies store — so he knows a lot about retail.

The stock jumped from $20 to above $40 when that news hit, and this caught a lot of short-sellers off-guard.

In fact, according to one CNBC article I read, GME is the most heavily shorted U.S. stock. 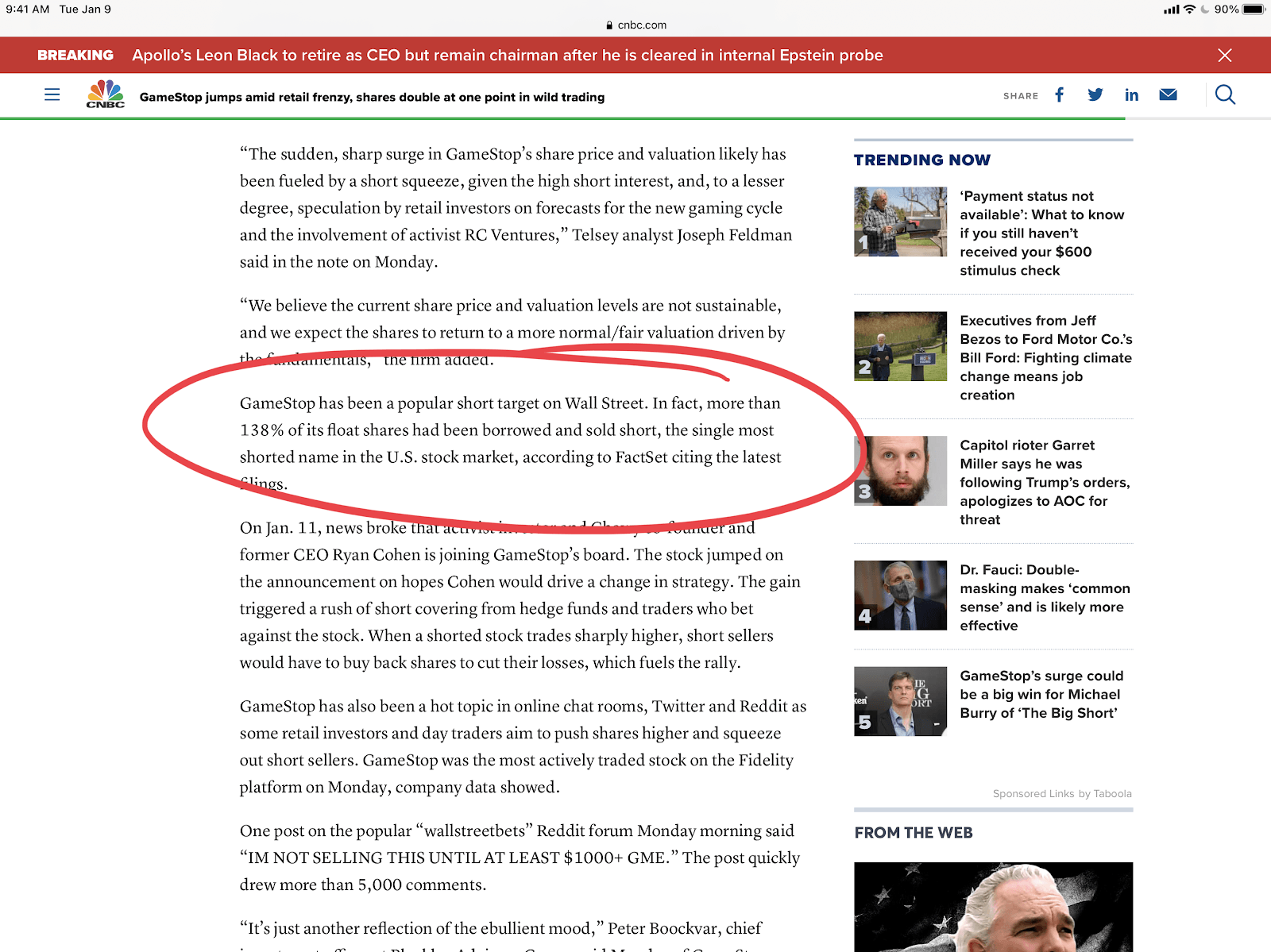 For those that don’t know, short interest is when a trader bets against the stock, meaning they want it to go lower.

To do this, they’ll borrow shares from their broker at one price. If the stock price falls, they can buy the shares back at a lower price to repay their broker and keep the difference as profit.

But if the stock rallies, short sellers will have to buy back the shares at a higher price to limit losses.

For stocks that are heavily shorted, this can create a sort of ripple effect: Because how do you close a “short trade”? Well, you SOLD the stock earlier so now you have to BUY it back. So when more shorts start covering, i.e. BUYING,  the stock climbs higher and higher.

This is the short squeeze.

And in GME’s situation, as the stock rallied on good fundamental news, shorts started to cover.

There’s a forum on Reddit called “WallStreetBets,” and their purpose is to “make money and being amused while doing it.” – their words, not mine. 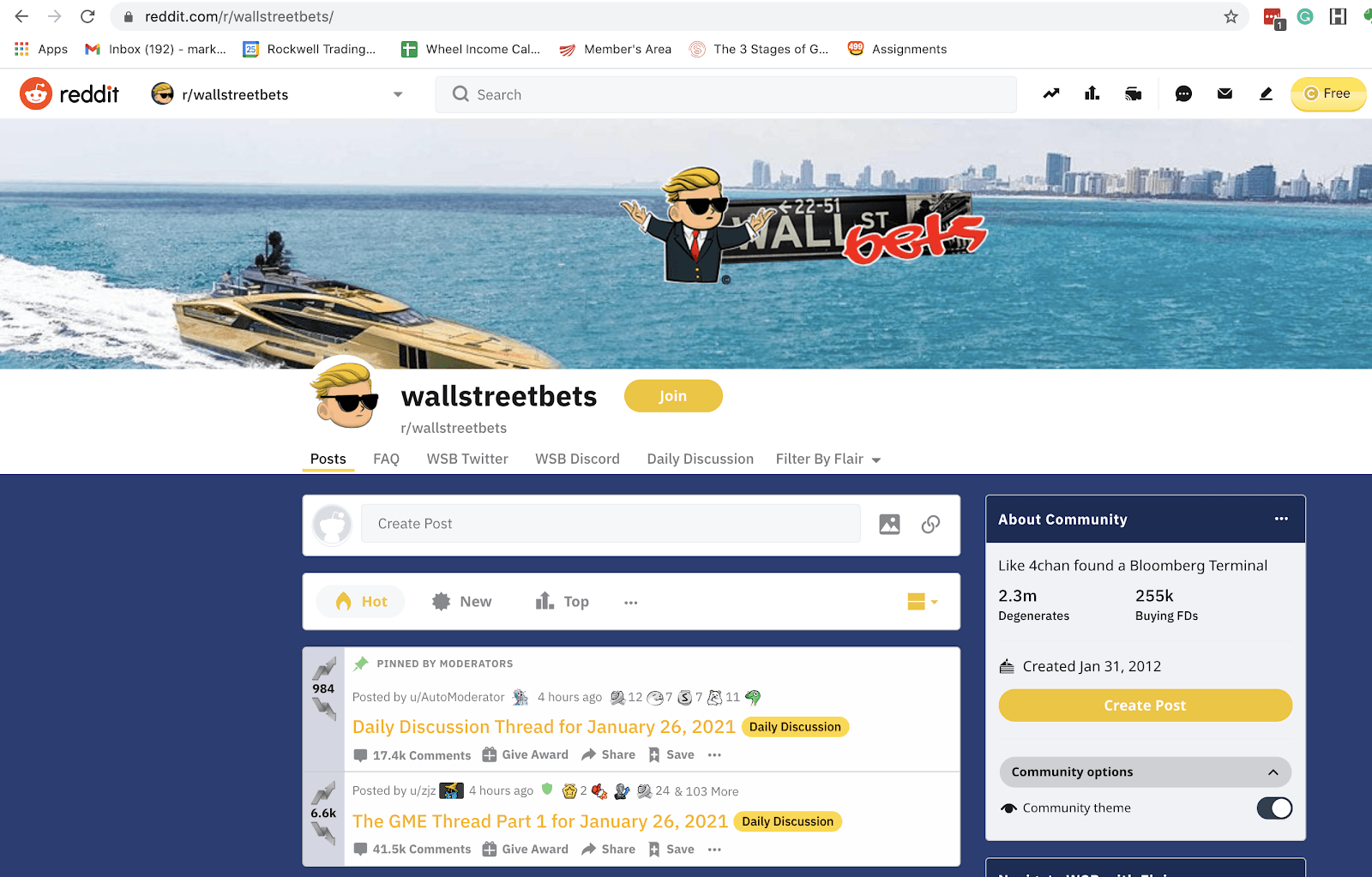 As GME was rallying, online traders on Reddit began posting about the stock and buying it to manipulate the shorts.

Take a look at some of these posts: 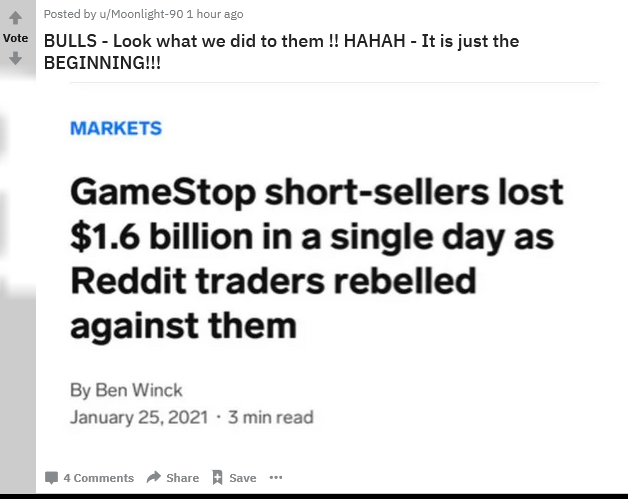 And as they bought the stock, the price soared, forcing more shorts to cover their positions, and again, this means that more people are BUYING.

It’s not surprising there are a lot of traders upset about this manipulation. Famous short-seller Citron Research is one of them, and said it would no longer comment on GME because of the “angry mob” on Reddit.

Now, you could make an argument for GME stock to keep going higher. There are probably some shorts still hanging on. And fundamentally, the company did report solid holiday same-store sales and digital sales growth a few weeks back.

But in reality, it’s dangerous to trade GME right now.

For starters, look how overbought this stock is.

And a lot of times, when these stocks fall, they fall fast.

Remember last summer when Eastman Kodak (KODK) went from $2 to $60 in two days, and then back down to $6 a month later? 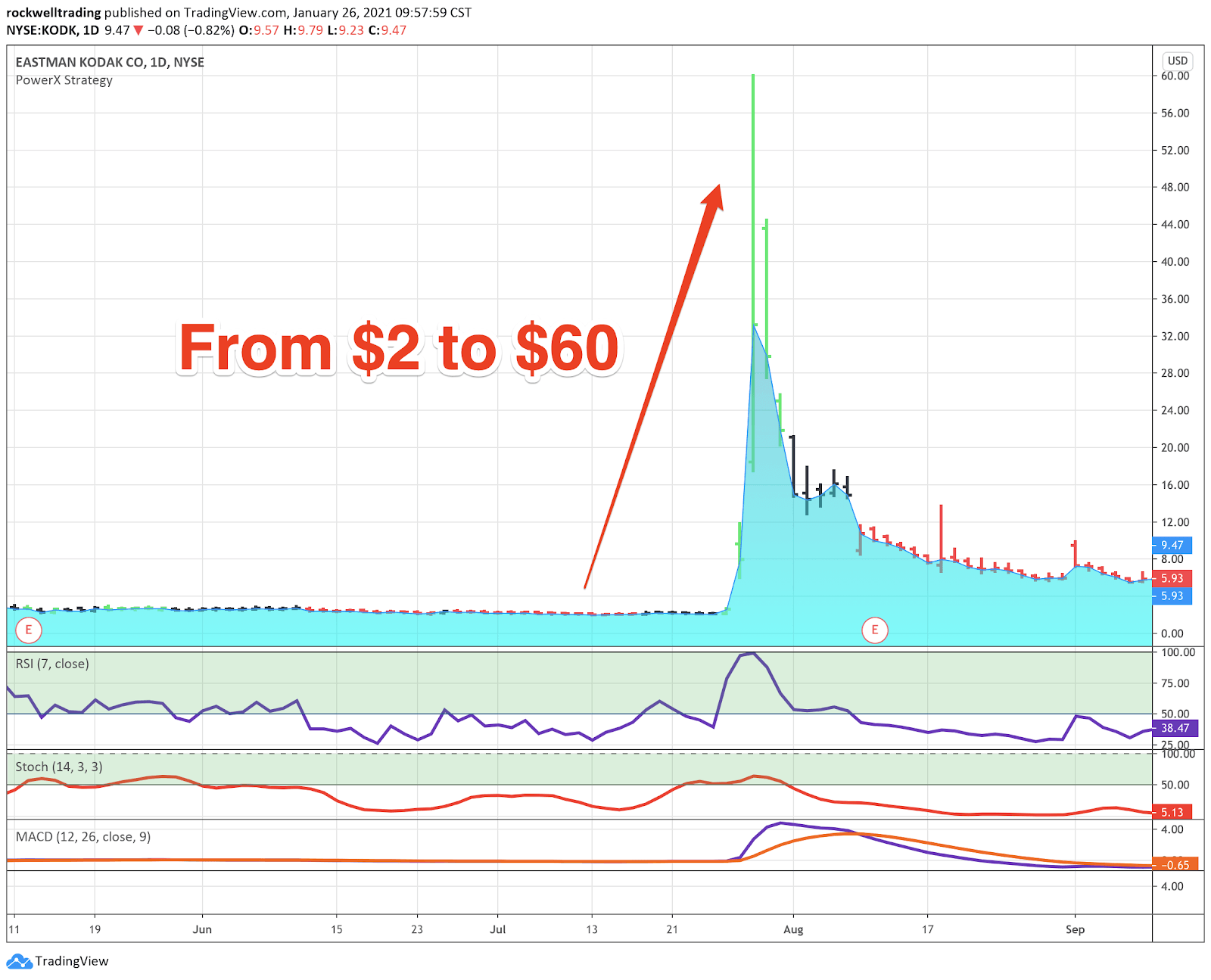 And implied volatility is all over the place. This means options premiums are crazy high right now for options buyers.

But it’s not a good time to sell options, either, because it’s hard to pinpoint levels of support or resistance.

And whenever I see a parabolic move as we’ve seen in GME, I leave it alone. The risk is simply not worth it.

Because at some point, the Reddit traders might lose interest in this stock. So they would just sell it and move on to the next stock, and that could make the stock crash. After all, there are 2.3MM people in this group!

Before we go, I just want to check out some more of these “short squeeze” stocks that have been volatile this week.

While I’m not going to be trading these stocks because of the risk involved, I’ll certainly be keeping my eye on them.