Update February 2: Shares in Gamestop (GME) collapsed again on Tuesday as the retail-fueled frenzy in heavily shorted stocks appeared to be coming to an end. Gamestop (GME) shares are down nearly 50% at the time of writing. S3 partners reported that the short interest in GME had fallen sharply and the cost of borrowing the stock had also fallen. 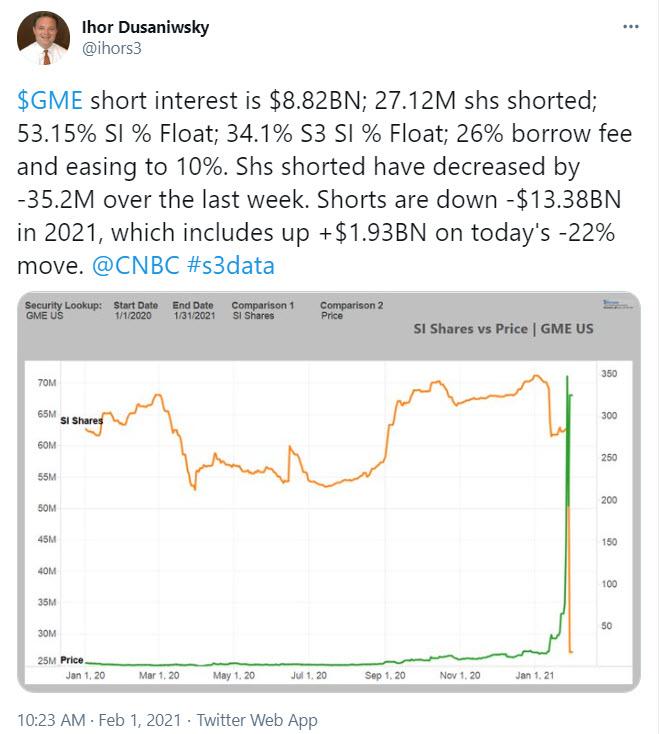 Update: GameStop Corp.(NYSE: GME) shares are changing hands at around $171 in Tuesday's premarket trading, down another 24% after crashing by 31% to $225 on Monday. The rush to the exits from the No. 1 "meme stock" continues at full force. Retail traders organizing on Reddit's Wall Street Bets are eyeing a short-squeeze on silver. XAG/USD hit an eight-year high above $30 on Monday. It is also essential to note that short positions on GameStop have substantially dropped. Moreover, some suspect that while some hedge funds were positioned against GME, others took advantage of the WSB amassing to jump on the squeeze bandwagon.  Best Stocks to Buy Forecast 2021: Vaccines and zero rates to broaden recovery

Update: Gamestop shares continue the volatile ride in Monday's pre-trade. GME shares were initially strong early during Monday’s pre-trading session in the US but reversed and are currently showing a loss of 2% at $316. Retail traders continue to show strong interest but the high price appears to be deterring many newbie traders who are instead buying the more moderately-priced AMC.

AMC shares are up 17% in Monday’s pre-market session at $15.68. Robinhood and many other retail platforms have stopped fractional purchases of Gamestop (GME) shares.

Update: Gamestop (GME) shares rebounded strongly in Friday's pre-market trading as Robinhood said they would allow limited buys of certain securities that had previously been restricted. Robinhood has faced a furious backlash from users, politicians and celebrities for its decision to suspend new purchases of Gamestop (GME) and certain other stocks that had been the subject of retail-driven short squeezes.

Robinhood was hit with a class-action lawsuit in Manhattan and Chicago federal courts. The brokerage company released a statement on Thursday saying “As a brokerage firm, we have many financial requirements, including SEC net capital obligations and clearinghouse deposits. Some of these requirements fluctuate based on volatility in the markets and can be substantial in the current environment. To be clear, this was a risk-management decision, and was not made on the direction of the market makers we route to.”

Gamestop (GME) shares are currently trading at $416 during Friday’s pre-market session, a rise of over 100%.

Update: Gamestop shares are the only thing traders are talking about this week. Last night earnings from Apple (AAPL) were completely overshadowed by Gamestop (GME). CNBC nearly devoted its entire day to Gamestop. And the latest Gamestop news is that the ride isn't over yet. S3 partners monitor short interest in real time and they tweeted late yesterday.

Wallstreetbets who have been credited with starting the move in Gamestop (GME) has seen its members rise from 2m to 4m! The war between wallstreetbets and the shorts has seen some high profile hedge funds capitulate, but clearly, new shorts have replaced them!

Gamestop (GME) has undoubtedly been the hottest stock of 2021. In 2021, GME is up over 300% and that is after GME shares halved from the intraday high yesterday.

Gamestop would normally never be mentioned in the mainstream business media but on Monday was the number one topic on CNBC and Bloomberg television.

Update: Gamestop shares surged again on Wednesday as the wild ride continued. GME peaked at $385 for now! CNBC reported that Melvin Capital closed its short position in Gamestop. Bank of America maintained its underperform rating on the stock, but raised GME price target to $10!

Update: GameStop Corp.(NYSE: GME) has closed Tuesday's tumultuous trading at $147.98, a surge of 92.71% – raising eyebrows across the world and creating headlines that go beyond a small group of retail investors. It seems that the army of traders organizing on Reddit's Wall Street Bets forums is set to continue pushing GME's shares higher, in defiance of hedge funds that have shorted the video game maker's stock. Wednesday's premarket trading is pointing to an increase of another 41.58% to $208.51. The Grapevine, Texas-based firm is already valued at over $10 billion – before any potential rise on Wednesday. The Federal Reserve may address froth in stock markets, but that will likely be shrugged off by the WSB folk.More  Best Stocks to Buy Forecast 2021: Vaccines and zero rates to broaden recovery

Update: GME shares are up 85% on Tuesday as the rollercoaster continues. Implied volatility is at never-seen high levels. Options activity was way above average for Gamestop. The Securities and Exchange Commission (SEC) may look at the recent activity in GME, but according to Bloomberg “Reddit-Fueled Rallies Like GameStop's Defy Easy Crackdown by SEC.” To be continued!

Gamestop (GME) has undoubtedly been the hottest stock of 2021. In 2021, GME is up over 300% and that is after GME shares halved from the intraday high yesterday.

Gamestop would normally never be mentioned in the mainstream business media but on Monday was the number one topic on CNBC and Bloomberg television.

Gamestop (GME) is a video game and consumer electronics retailer with a global network of stores selling new and second-hand video games and related products. Shares in Gamestop (GME) suffered in the early stages of the pandemic last March but recovered strongly as investors saw potential from stay-at-home gamers and the new Playstation 5 and Xbox releases. GME closed out the year at $18.84. GME shares hit a high of $159.18 on Monday.

The bigger picture here is one of a changing landscape, the liberalization of financial markets to all. Financial markets were almost always the preserve of institutional investors. High barriers to entry made it uneconomical for retail investors to have the same timely access to information that institutional investors enjoyed. Information is power and timely information existed on a handful of expensively exclusive news wires, such as Reuters, Bloomberg, etc. Access required a satellite connection until only a few years ago. What we have seen has been a gradual opening up of this information to the retail space.

The advent of the internet started this process with online brokers making individual access to trade the stock market easier. Trading costs gradually reduced, increased competition and scale helped, as online access became more and more widespread. In 1999/2000, the tech bubble in Nasdaq stocks did have some definite links to this online democratization of trading with retail playing a strong role.

Power to the people!

What has happened this year has been the logical endpoint of this democratization of trading that began way back in the tech bubble of 2000. A perfect combination of factors have confluence to make this possible. Gamestop (GME) has merely been the poster child.

The coronavirus pandemic meant people were at home with time to spare and a lot of people turned to online trading apps such as Robinhood to play the stock market.

Increased internet speeds have meant retail investors have access to information once the preserve of institutional investors via expensive satellite connections. This has also meant speed-of-trade execution is instantaneous, enabling easy intraday trading and analysis.

The power of groupthink

Online chat rooms have been around for some time but with people having more spare time at home, increased internet speeds and critical mass being reached in certain groupings (/wallstreetbets having nearly 2 million members) suddenly the power of groupthink retail was as powerful as large institutional investors.

Where to from here?

We have most likely witnessed a change in the way markets will operate in the future with the market more open and accessible to all. Retail investors can no longer be overlooked. This may cause more volatility in certain stocks and markets going forward and cause stock prices to move far from fundamental norms in the short term. However, the laws of supply and demand, price expectations and increased liquidity should overall still underpin markets.

Markets have always been governed by fear and greed. Markets have always over-extended and snapped back like a piece of elastic. The market will always go too high or too low, just maybe this time the underlying participants will be more broadly based.