Rivian (RIVN) has a number of noted events this week and none appear to be particularly beneficial to the stock price. RIVN stock cratered over 20% on Monday in a market meltdown that saw the Nasdaq shed 4% while the S&P 500 lost 3%. Growth stocks and pandemic favorites once again took the brunt of the selling. RIVN stock closed 21% lower at $22.78.

Rivian IPO'd late last year in November at $78 and traded up to $179.45 a few days later. We repeatedly warned the valuation made no sense to our readers and continue to remain bearish on the stock.

Rivian will report earnings after the close on Wednesday. Earnings per share are expected to hit $-1.44 and revenue is expected to come in at $130.5 million. These numbers will not be what is important in the earnings call. The rate of cash burn and the production timeline will be much more important. The conference call will need to address supply chain issues and give confidence that supplies are in order and can be continued. Also of note will be the production target of 25,000 vehicles. Any reduction in this will see RIVN stock fall sharply.

Also of note is the news reported by CNBC on Monday that blocks of Rivian are due for sale this week as the lockup period expires. Most stocks are subject to a lockup period post an IPO. This means cornerstone investors are prevented from flipping their stock quickly. The traditional lockup period is 180 days and this week has seen that period expire for Rivian. Up to 800 million shares could be available for sale post the lockup period. CNBC reports that Ford and another unnamed investor are preparing to sell a decent amount of stock. Ford is expected to sell 8 million shares of its 102 million holdings. CNBC quoted sources as saying Ford has hired Goldman Sachs for the share sale.

CNBC also said another investor had hired JPMorgan to sell a block of Rivian stock on its behalf. The report says that the block for sale will be 13 to 15 million shares. Naturally, speculation has mounted that it could be related to Amazon which has a stake in Rivian. There are other holders who may of course also be selling but we will have to wait for SEC filings to see what has transacted. Until then it is only speculation.

Given the lockup period has expired, that will put further negative sentiment on RIVN stock. While nothing may be transacted, it still creates uncertainty. High-growth names have fallen dramatically out of favor and now valuations are falling dramatically, perhaps back to more acceptable levels. RIVN stock is down 85% from post IPO highs and that still looks too high in our view.

Macro events are dominating markets. Witness the 90%+ down days we have had on Thursday and now Monday. 90% down days mean stock-specific news is overlooked and general selling panic is what ensues. This is not yet done. In such a situation flight to quality is evident. Witness the US dollar surge and gold holding stable. Flight to quality happens in the stock market as well in times of stress. Value stocks and cash-rich companies will outperform those that burn cash and need capital.

Rivian burns a lot of cash, its capital position is strong after IPO but it is still basically a start-up.

From a technical perspective, there is not much to add. Obviously, RIVN stock is strongly bearish with a series of lower lows and lower highs. The RSI and MFI are not oversold giving more room to the downside. We expect earnings to disappoint. All the way up at $53.64 is the bearish pivot, RIVN stock remains bearish below this level. $29.49 is the immediate resistance, above which RIVN is neutral. 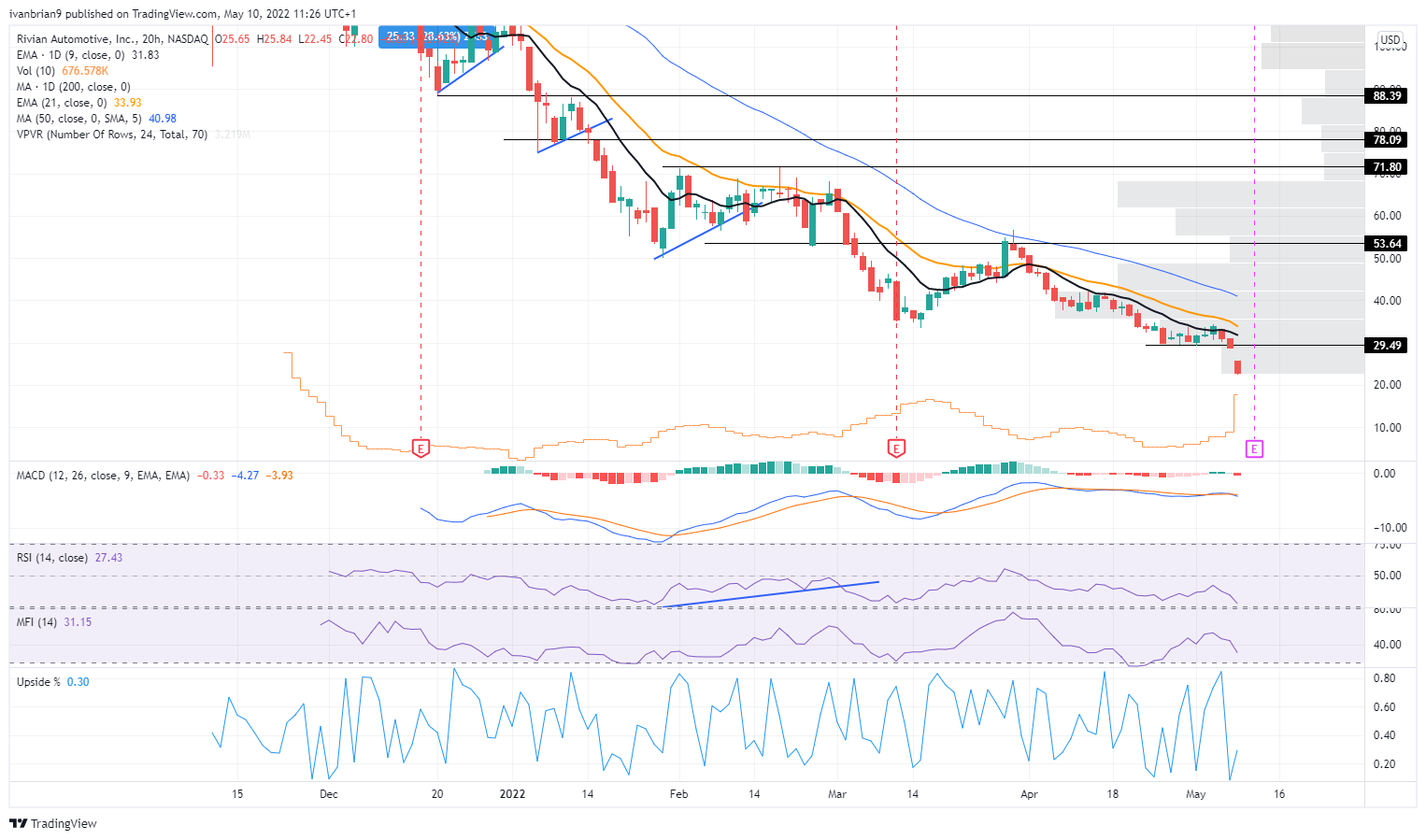