XRP price is currently set to close with consecutive inside bars on the 4-hour chart, decidedly proving that today’s charged rally is not commanding any selling pressure. Some weakness may emerge, but if the bullish thesis sticks, Ripple will adjust for the price compression by moving laterally for a day, maybe two.

During a CNBC interview today, Brad Garlinghouse, CEO of Ripple, expressed his frustration with the opaque regulations in the United States that afford little clarity for cryptocurrencies. Specifically, the Security and Exchange Commission (SEC) lists XRP as a security, while virtually every other country has affirmed it as a currency.

Garlinghouse applauded the regulations in Asia, particularly Singapore and parts of South Korea, where “there has been a thoughtful government-led effort to define and have clear regulatory frameworks around cryptocurrencies.”

It has been a rough road for XRP price in April. It began with a gain of nearly 250%, followed by a 50% crash and now an 85% rebound. Despite the noise, Ripple is on pace to gain close to 180% this month, marking the second-best month since trading began in May 2017.

Ripple is up 14% at the time of writing and poised to close with consecutive inside bars on the 4-hour chart, illustrating a committed bid that is disinterested in capturing today’s gains. An extension of the pause is possible and even necessary to release the price compression, but the longer-term outlook remains incrementally bullish.

Resistance is anticipated to unfold at the 78.6% Fibonacci retracement at $1.73, about 10% above the current price. Ripple enthusiasts are fixated on the psychologically important $2.00 and the 61.8% retracement of the 2018-2020 bear market at $2.08. After seeing how XRP price oscillated around $1 back in early April, it can be surmised that the next round number will be equally imposing. 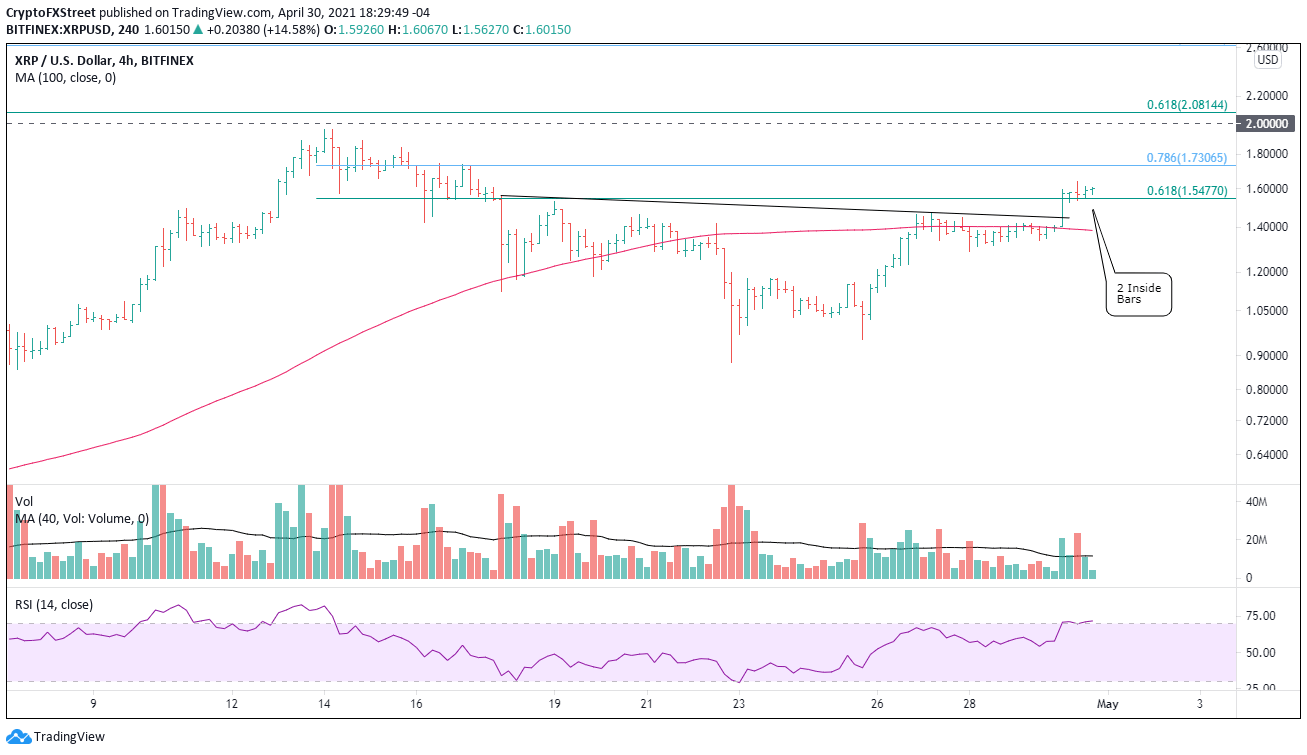 Yep, the bullish outlook could be easily undermined by a negative news roll regarding the SEC lawsuit or a new collective decline in the cryptocurrency complex. If so, some support will be unmasked at $1.28, but the legitimate level still rests at $1.00.

The only thing for certain with Ripple is that any investment program that does not stage its entries with precision and elevates risk management to the forefront will be another causality in the volatile pursuit of the all-time high at $3.30.

Dogecoin price has successfully bounced off the $0.397 to $0.451 demand barrier, hinting at an incipient upswing. A continuation of this momentum could push DOGE to $0.697 and $0.740. Breakdown of the support level at $0.371 will invalidate the bullish thesis.

MATIC price breakout from a minor correction gains traction above $1. Extreme overbought conditions on the weekly chart may not mark a top. Oddz Finance and Stakefish deals continue the accelerated adoption of everything Polygon.