XRP price has gained 100% since the April 22 low while building a solid foundation for further gains in the coming weeks. Consolidation may extend for a couple of days. Still, the technicals point to the continued relative strength and solid absolute returns.

In a new inning of the documentation production battle between the Securities and Exchange Commission (SEC) and Ripple, judge Sarah Netburn has restated that the SEC must produce all documents related to Bitcoin, Ether and XRP.

The regulatory agency has repeatedly stated that it does not possess any material related to the major cryptocurrencies. Still, if it is revealed that the SEC did discuss XRP with the two largest cryptocurrencies, it would further establish Ripple’s argument. More specifically, the most important materials are related to the SEC’s clarification of Bitcoin and Ethereum as not being securities. The agency regards XRP as a security.

The enforcement action of the SEC against Ripple has to be the most important lawsuit in the cryptocurrency space. However, unlike lawsuits involving other crypto-related enterprises or assets, Ripple has the firepower to battle the case to the Supreme Court if necessary.

Ripple has provided three opportunities to engage bullish speculators, the hammer candlestick pattern on April 23, the inverse head-and-shoulders breakout on April 30 and yesterday’s emergence from a bullish cup-with-handle base. In all, XRP price has assembled a substantial foundation to build a long-duration advance.

Yesterday, XRP price broke out from a bullish cup-with-handle base, allowing new speculators to capitalize on a timely entry price. Unfortunately, the breakout mildly pulled back into the base, forcing speculators to practice patience as XRP price clarifies intentions.

The reversal back into the base triggered a longstanding trading rule: the pullback-plus-four. It specifically states that speculators need to give the digital asset four days to trade above the breakout high. A failure to do so augments the probability that XRP price will decline or evolve into a more complex pattern.

At the moment of writing, the bullish thesis remains active, with the first notable resistance arriving at the convergence of the April high at $1.96, the psychologically important $2.00 and the 61.8% Fibonacci retracement of the 2018-2020 bear market at $2.08.

The measured move target of the cup-with-handle base is $3.16, generating a gain of 90% from the handle high of $1.66. A rally of this significance would position XRP price to target at least the 2018 all-time high at $3.30. 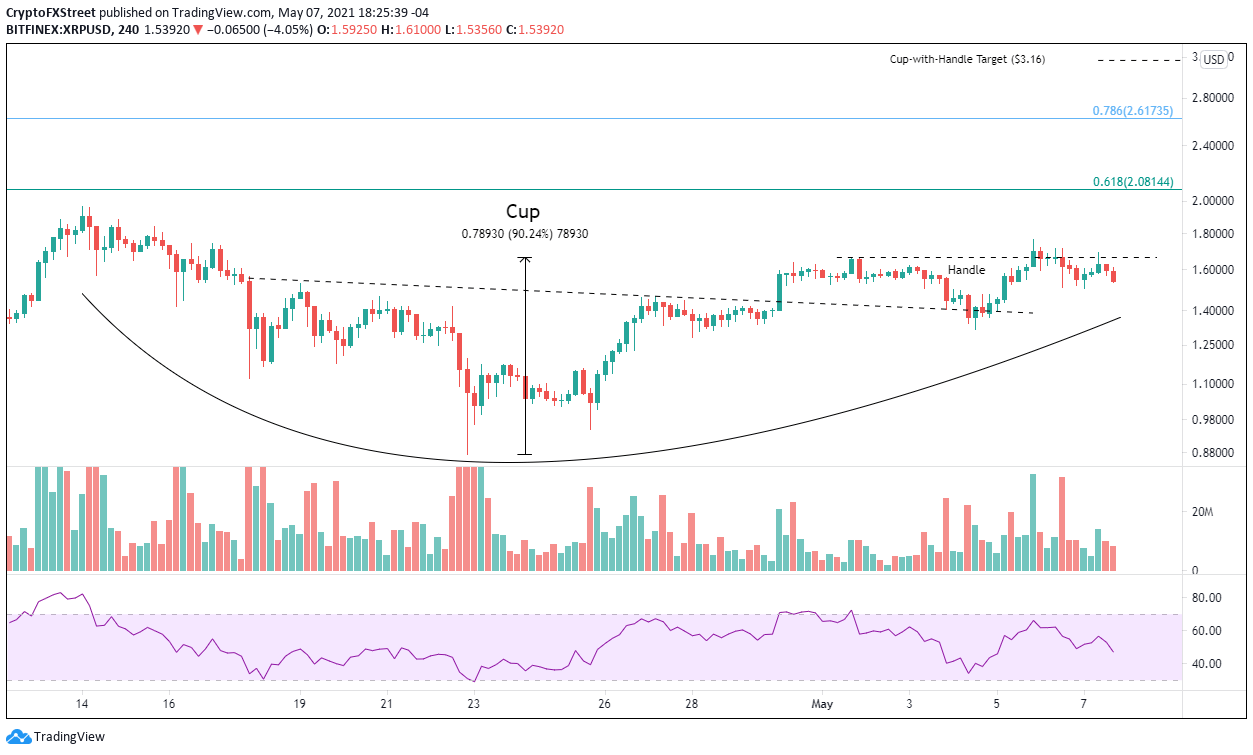 Speculators should turn defensive if XRP price fails to rally above the breakout high of $1.76 within four days, starting with today. A decline below the handle low of $1.31 immediately places Ripple in a vulnerable technical position, signifying a complex bottoming process or even a plunge to the April low at $0.874.

XRP price has withstood the legal gyrations to be one of the top-performing cryptocurrencies since the April low, displaying noteworthy speculator demand. Similarly, the explosion higher for the XRP/BTC pair affirms that the returns have been strong on an absolute basis and a relative basis.

Chiliz price climbed just over 70% from the June 9 low to the May 11 high in the run-up to the kick-off of the European Cup, one of the premier soccer events in the world. The notable rally did capture the attention of the cryptocurrency markets and the CHZ faithful, but it has since stumbled lower.

XLM Price Forecast: Stellar may be on the brink of a 50% collapse

XLM price has been propped up by the symmetrical triangle’s lower trend line and 61.8% Fibonacci retracement level of the March 2020-May 2021 rally. Volume runs well below the 50-day average, revealing no accumulation or distribution by investors.

Litecoin price action has been dull since the May 23 low as the area around the 200-day SMA has been a tremendous influence. Unless LTC overcomes the significant resistance constructed by ...

Chainlink price has renewed its correlation with Bitcoin with a resounding 27% bounce, but volume has languished below the 50-day average, and LINK is nearing a fundamentally important price level.