XRP price is on the edge of decline if it fails to rise above a critical resistance level, putting any chance of recovery in jeopardy. Ripple must also hold above its last line of defense to avoid dropping lower toward $1.

XRP price has been trapped within a descending parallel channel on the 12-hour chart and is at the cusp of falling further if the last foothold fails to hold. The prevailing chart pattern dictates a bearish bias on Ripple, resulting in the failed attempts of the token climbing higher.

The Arms Index (TRIN), which gauges overall market sentiment, suggests that there are currently more sellers than buyers in the market, as it flashed the reading of 1.29.

XRP price is holding onto its last line of defense at $1.10, where the 21 twelve-hour Simple Moving Average (SMA), 50 twelve-hour SMA and the ascending support trend line that formed since July 20 meet.

Failing to sustain trading above the aforementioned level of support could mean trouble for the bulls, as Ripple would be susceptible to further decline, dropping toward $1.06 next, at the 38.2% Fibonacci retracement level, then toward the 100 twelve-hour SMA at $1.05, before eventually tagging the middle boundary of the governing technical pattern at $1.04.

An increase in selling pressure could see XRP price plunge toward the 200 twelve-hour SMA at $1.01, before eventually tagging the downside trend line of the parallel channel at $0.96. 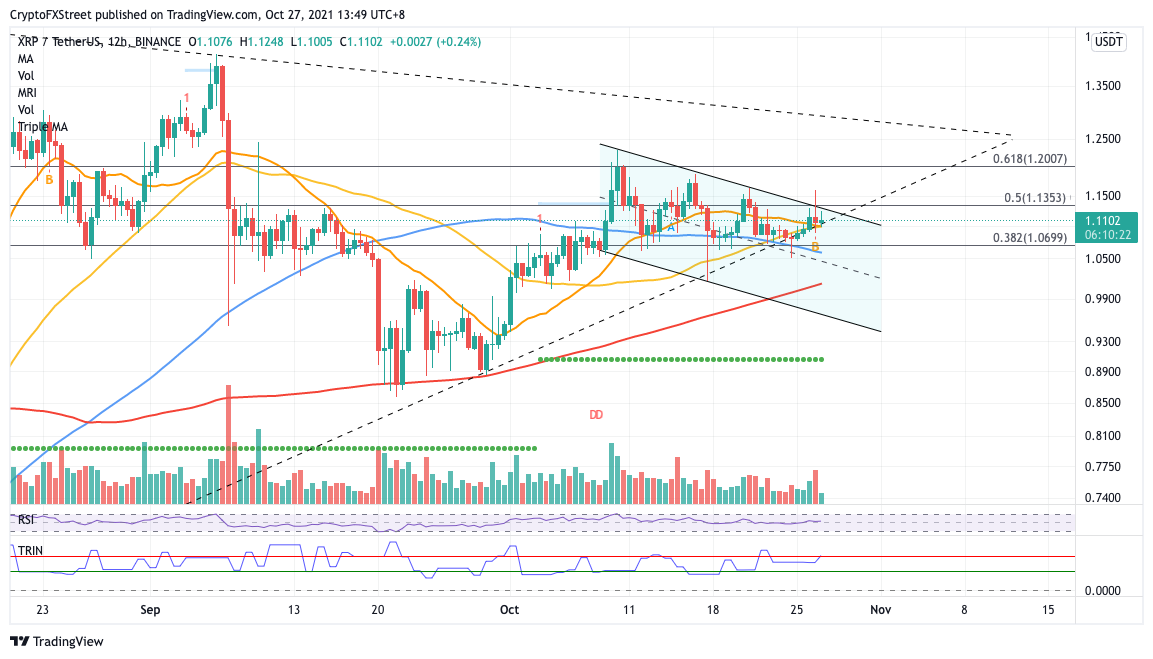 However, if XRP price manages to hold above $1.10, Ripple could face resistance immediately at the upper boundary of the prevailing chart pattern at $1.12. An additional hurdle may appear at the 50% Fibonacci retracement level at $1.13.

Until XRP price slices above the upside trend line of the governing technical pattern, a recovery awaits.