XRP price could make or break based on the outcome of Ripple Labs case with the US Securities and Exchange Commission (SEC). In the latest twist and turn in the courtroom drama, Ripple (XRP), which is a cross-border payment settlement firm and one of the largest public holders of XRP itself, filed a redacted reply in response to the SEC’s motion against a summary judgment. XRP price outlook remains bullish, the next target for the altcoin is the $0.41 level.

XRP price remained largely unchanged after Ripple Labs filed its reply to US financial regulator SEC’s opposition to a motion for summary judgment. Ripple insisted that the SEC  had not been able to show the sale of the altcoin XRP was an offer for an investment contract; therefore their argument that XRP is a security was void.

Ripple’s lawyers are arguing that the regulator failed to demonstrate that the purchasers of XRP tokens bought a “common enterprise”, one of the four criteria used by the Court in the SEC v. W.J.Howey Co. case to establish whether an investment contract existed. The full list of criteria was as follows: ,

According to Ripple’s lawyers, the SEC has been unable to prove the four criteria, therefore XRP is “not a security” or an investment contract. Lawyers added that:

The SEC has now conceded that the digital asset exchanges on which the Individual Defendants conducted the vast majority of their transactions were foreign. That concession extinguishes its claims because federal securities laws do not reach foreign sales and offers.

While the American technology company has a strong case defending itself against the regulators allegations, experts believe it is too early to determine whether the argument will prevail in court.

Defense lawyer James K Filan believes a summary judgment in the SEC v. Ripple lawsuit might come sooner than expected. The former federal prosecutor noted that the judge was likely to consolidate most of the pending issues for determination in one ruling. The court has to decide on three major issues before issuing the final verdict.

Filan was quoted as saying:

Why would Judge Torres slog through the expert motions and the sealing motions (including the sealing of the Hinman documents) separately before deciding what parts of them,if any, are relevant to deciding the summary judgment motion?

Brad Garlinghouse, CEO of Ripple applauded the payment giant’s lawyers effort in getting to this point in the lawsuit:

I said it on day 1, we will aggressively fight to get clear rules for the entire industry in the U.S.

Congrats to all of Team Ripple for getting us to this point. Ripple stood strong and withstood the SEC’s onslaught. I look forward to being on the right side of justice. https://t.co/oKhKjIdTSW

XRP price has been in the consolidation phase over the past few days. At the time of writing, the altcoin is changing hands at $0.39. The altcoin is trading below key resistance at $0.40, represented by the 200-day Exponential Moving Average (EMA).

XRP price chart below shows what might be a symmetrical triangle formation. Based on the above technicals, a bullish breakout is possible at the $0.41 level. 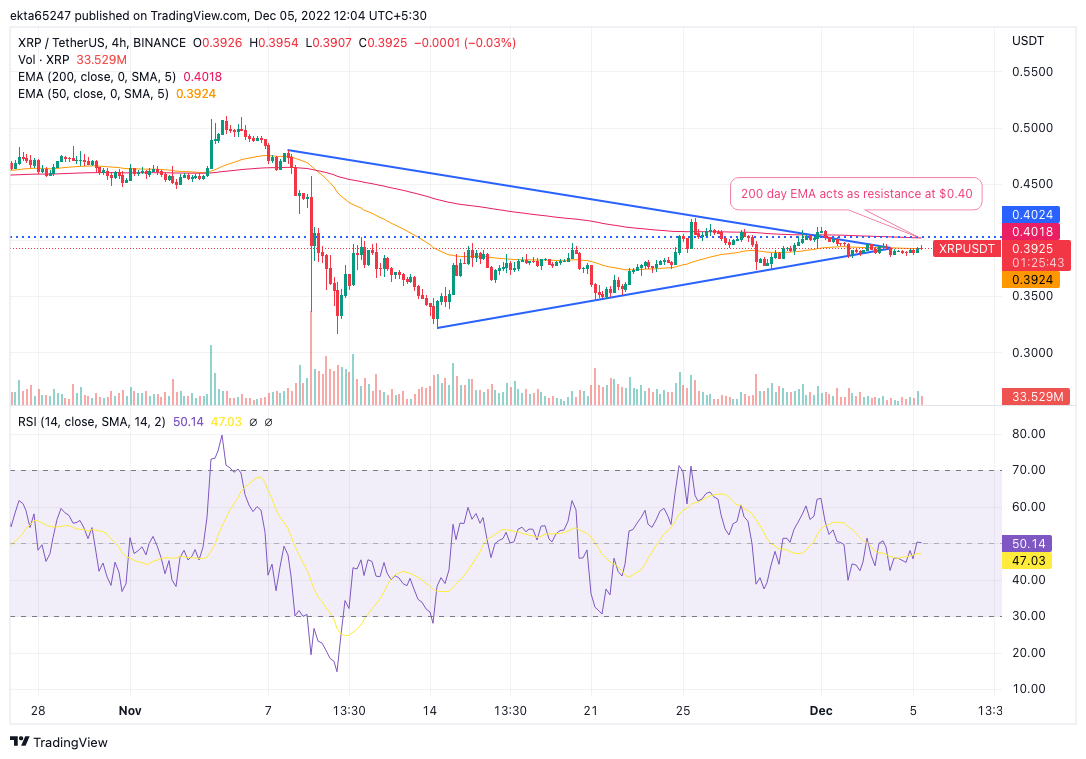 A decline below support at $0.38 could invalidate the bullish thesis for XRP price and result in further decline in the altcoin.