Stellar price appears to be crawling back from the abyss after massive widespread declines were witnessed across the crypto market. The cross-border money remittance token tagged support at $0.0796 before rebounding to trade slightly above $0.1000. More buyers will join the market if XLM holds above this level, paving the way for another leg up to $0.1200.

The Stellar Development Foundation has partnered with GMO-Z.com Trust Company, Inc. to bring two stablecoins, referred to as GYEN and ZUSD, to the Stellar network. GYEN is the first regulated Japanese yen (JPY) stablecoin.

GMO Trust is based out of New York but is a subsidiary of GMO Internet Group (GMO Group), a Japanese Internet Conglomerate. With this new development, users will make near-instant and cost-effective transactions on the Stellar global blockchain network.

Users interested in learning more about GYEN and ZUSD can visit Stellar’s Twitter handle. However, the stablecoins will allow no-cost asset swaps between their Ethereum and Stellar network versions.

The Moving Average Convergence Divergence (MACD) indicator is sending a buy signal on the four-hour time frame chart as the 12-day Exponential Moving Average (EMA) (in blue) crosses above the 26-day EMA (in red). A subsequent movement of the MACD toward the mean line (0.00) will further boost the momentum behind Stellar price, rendering the anticipated move above $0.1200 achievable. 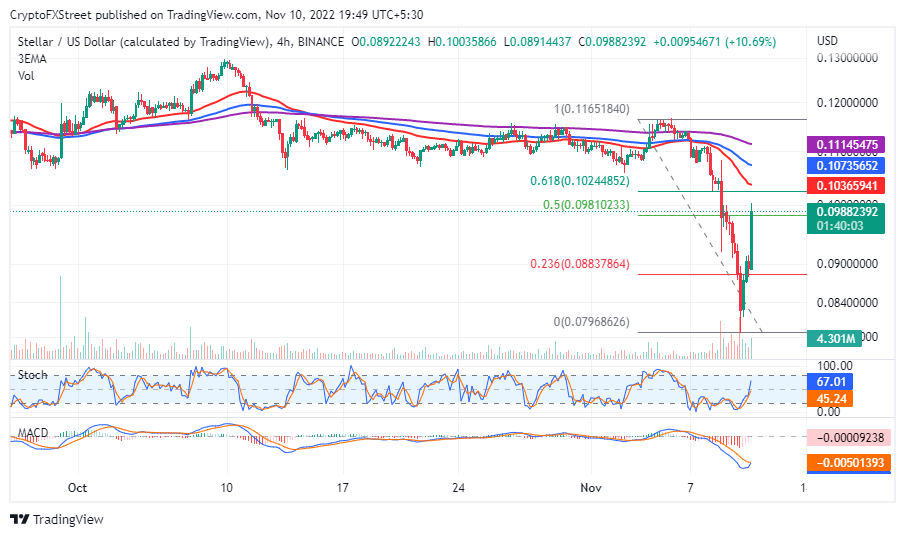 The Stochastic Oscillator validates the increasing presence of bulls and their influence on the price. After falling into the oversold region (below 30.00), this indicator has broken out and is almost clearing the neutral area.It may cross into the overbought region before Stellar price considers another trend correction.

A movement above and hold of support at $0.1000 will increase XLM’s chances of jumping above $0.1200. On the other hand, a retracement to the 23.6% Fibonacci at $0.8838 is possible, although this too could be bullish in the long run, allowing bulls to collect more liquidity ahead of another attempt at rising above $0.1200.