Although Cardano price has continued to drop since the Alonzo hard fork launch, the protocol’s network activity has continued to increase. Analysts argue that the Ethereum-killer could be the most legitimate alternative to the existing ETH ecosystem.

The cryptocurrency community has long pitted Cardano against Ethereum as competitors. Romain Pellerin, the chief technology officer at Input Output stated that Cardano would be “on par with Ethereum” once smart contracts were launched, with a reduced carbon footprint.

The founder of Cardano, Charles Hoskinson previously argued that Tesla should accept ADA for payment after Elon Musk stated that his company would halt Bitcoin payments due to the leading cryptocurrency’s harm to the environment caused by mining operations. Due to the fact that Cardano runs on proof-of-stake, it does not require high levels of energy consumption, unlike BTC and Ethereum.

Cardano price has proceeded with sliding further following the Alonzo hard fork, while the top two cryptocurrencies by market capitalization registered new  all-time highs in the past two months.

The Ethereum-killer has not reached new highs since September, and the launch of smart contracts did not seem to have much of an effect on boosting Cardano price higher.

Cardano’s network activity has continued to increase as the blockchain has allowed users to create decentralized applications (Dapps) on its network. Some of the projects in development currently include NFT marketplace THEOs and Indigo Protocol which allows participants to trade real-world assets on the blockchain.

While Ethereum would still need months before it can fully transition to a proof-of-stake consensus mechanism, Cardano has already been running successfully on this type of algorithm.

As Cardano has grown immensely over the past year in transaction volume and market capitalization, it could easily have an edge over Ethereum.

Hoskinson recently argued that since Cardano is a future proof design and that the development team is “systematically building towards it together with the strongest and most engaged community brick by brick,” there does not need to be a “magical Cardano 2 to survive.”

According to prominent analyst Lark Davis, it is about time for “Cardano to start taking off again,” as a lot of development in the DeFi industry is about to kick-off, including Ardana and Sundae Swap, which he stated will “drive increased demand for ADA.”

Cardano price aims to tackle $1.64 next to kickstart recovery

Cardano price has formed a descending parallel channel on the 4-hour chart, as ADA has been unable to create higher highs. It appears that the Ethereum-killer is aiming to kickstart recovery as it sliced above the 21 four-hour Simple Moving Average (SMA) at $1.56.

The next area of resistance for Cardano price will emerge at the June 15 high at $1.61, near the upper boundary of the prevailing chart pattern. If ADA manages to break above this level, it could signal a bounce for the token’s price.

The following hurdle for Cardano price will appear at the 50 four-hour SMA at $1.67, then at the 38.2% Fibonacci retracement level at $1.78. Bigger aspirations will target the 100 four-hour SMA at $1.81 before facing a stiff headwind at $1.89 where the 50% retracement level and resistance line given by the Momentum Reversal Indicator (MRI) coincide. 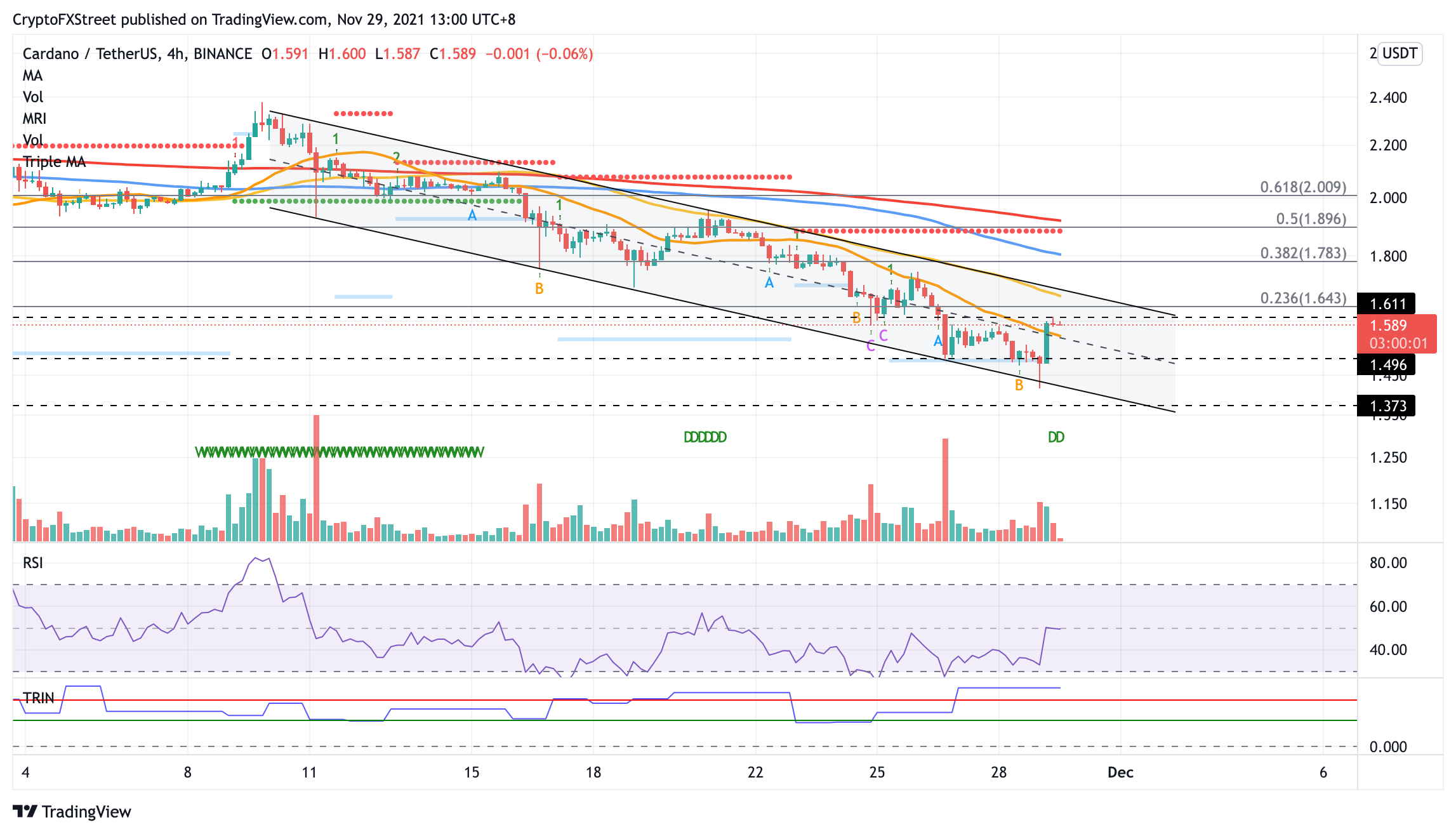 If selling pressure increases, Cardano price will discover immediate support at the middle boundary of the governing technical pattern at $1.55, where the 21 four-hour SMA also sits. If ADA continues to drop lower, the July 4 high at $1.49 will act as the next line of defense for the token.