What are in cryptocurrency? Risks, Opportunities and Calendar for all 2018 forks

Forks are in fashion nowadays. This phenomenon has become an essential feature of cryptocurrency world. However, most people have a vague idea of what the forks are all about and what they mean for cryptocurrency investments in the long run. So let's get it all sorted out.

What is a fork

Cryptocurrency fork is an event that splits the existing software protocol into two co-existing versions.

Forks may happen accidentally. If two miners discover a block at the same time, some nodes of the decentralized blockchain system register different information, resulting in two chains. Since a split in consensus causes these forks, they are quickly identified and resolved, so they do not have any destabilizing influence on the network.

However, the majority of cryptocurrency forks are done on purpose. They occur when developers intentionally modify the source code to add new features, fix vulnerabilities or change the fundamental rules of network operation. Usually, the forked code is similar to the original, but with substantial modifications, which are permanent and require the network users to upgrade their software to the newest version. Sometimes intended forks create a new protocol, new digital asset, and even new community.

Cryptocurrency forks happen in various forms, though, regardless of their nature, they have a common parent protocol and share the transaction history before the split. 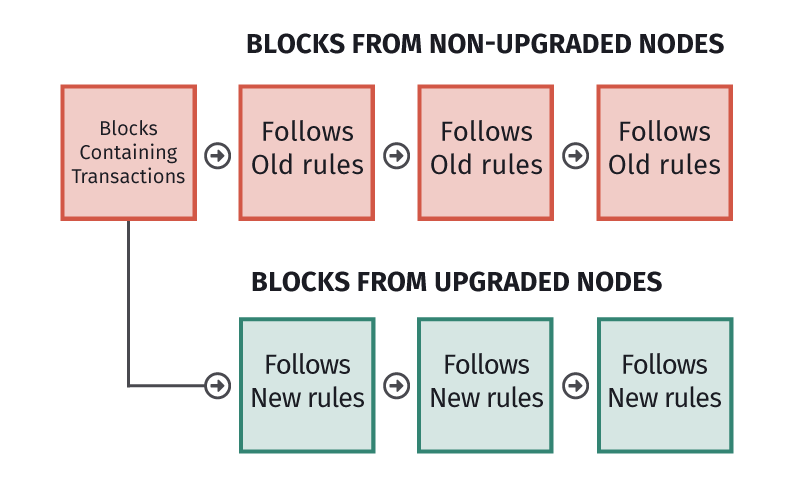 All intentional cryptocurrency forks can be classified into two major categories: soft forks and hard forks

In essence, both hard and soft forks result from changes implemented to the source code, where a new version of the protocol is created in parallel with the old one. However, the devil is in the details, so let's slice and dice it.

1) Soft forks - everyone is happy

A soft fork is a software upgrade that can still work with older versions. It is called backward compatibility, which means that users that failed to upgrade their software to the latest version won't be entirely cut off from the network. Blocks created by the latest software version will be accepted by old version nodes, but not the other way round. The newer software will reject old blocks, thus forcing users to upgrade. This is a snowballing process as the more miners switch to the newer version, the longer their chain becomes, encouraging the other miners to update the software and join the mainstream.

A soft fork may be caused by changes that tighten the rules of block validation or implement additional functionality without affecting the network structure. Thus, rules reducing block size from 1MB to 500KB will create a soft fork as they imply tighter conditions. Non-upgraded users will continue to see and recognize incoming new transactions, but their blocks would be rejected by the network because they do not comply with the new block size.

A soft fork is possible only if a majority of users choose to upgrade to the new version to enforce new rules on the whole blockchain. This type of fork is considered to be temporary as the chain with the biggest hashing power eventually absorbs the shorter one. Thus, If more than 50% of miners upgrade to the latest version, then the older version will become redundant and vice versa. However, since both old and upgraded nodes accept new version blocks, the new version eventually wins.

Investor considerations: Since soft forks do not carry the double-spend risk, they are mostly dull events that go unnoticed by the crypto investment community most of the times. Merchants and users with unupgraded nodes will read and recognize both new and old version blocks, ensuring smooth network functionality.

A hard fork implies a change to a software protocol that makes older and newer versions incompatible. It means that newly generated blocks do not support old ones and vice versa. Users running old version will be completely separated from the network and won't be able to participate in validating and verifying transactions. In case of a hard fork, all users have to switch to a new version to stay in sync with the network. Otherwise, if they continue operating, they will end up with an entirely different chain and different data set registered in the ledger. Two chains can concurrently exist, as long as miners are willing to support the minority offshoot.

A hard fork is needed to modify structurally essential parameters or loosen the rules of block validation. Such fundamental changes include a block size increase, the difficulty of a cryptographic puzzle, limits to additional information, etc. Thus, if a block size limit is increased from 1 MB to 3 MB, then a 2MB block will be validated by a node with the newest version of the software as it allows the bloc up to 3 MB. Nodes running older version will reject it. Furthermore, it will ignore that block and attache its new validation to the previous one, compliant with old rules. Eventually, you will end up with two chains: one with both new and old types of blocks and the other one with only old version blocks.

Hard forks can be either planned or controversial. In the first case, the update was stated in the project's roadmap since the very beginning, which means that the whole community moves to the new chain, while the old one is abandoned. A controversial fork happens when the community members cannot agree on fundamental issues. As a result, one group introduces significant changes to the code, and thus creates a new chain with a new digital asset, based on it.

Investor considerations. Hard forks are potentially messy and plagued by double spending problem: coins spent in a new block can be spent once again in an old block as merchants and users with the old version of the software will not see the spending registered on a new chain. Even planned hard forks might lead to confusion and loss of money as due to decentralized nature of the system it is challenging to get all the nodes to switch to the newer version at the same time.

DAO (Decentralised Autonomous Organisation), an investor-directed venture capital fund, was launched and on 30 April 2016 and by the end of May there were over $180M worth of Ether on the fund's Ether accounts. However, a month later a phenomenal success turned into a dreadful disaster. In June 2016 some unknown hackers exploited a critical flaw in the DAO code to drain over $50M worth of Ether from users' wallets.

The consequences of the hack was so great and overwhelming that on July 20 the Ethereum community implemented a hard fork on Ethereum to restore the major part of the funds held on the accounts. However, the decision was far from unanimous as some community members insisted that the attack was unfair but still valid manoeuvre, while the decision to reverse transactions questioned the immutability of smart contracts. They stayed with the original version of the network, giving birth to a new digital asset - Ethereum Classic.

Risks and opportunities of hard forks

Both hard and soft forks are an inherent part of cryptocurrency universe. They facilitate and foster industry development, based on the underlying principles of decentralization and open source code. However, cryptocurrency investors and traders should understand the risks and opportunities created by this phenomenon and consider them while making investment decisions.

1) How to take advantage of the upcoming fork

Free coins. Hard forks that lead to the creation of a new digital asset are welcomed by the community because they provide free coins to balance the issuance. When the split occurs, holders of the old coin receive the same amount of new coins for free. To benefit from a cryptocurrency hard fork, investors should keep their holdings in a digital wallet or on the crypto exchange account that supports the fork. Otherwise, they won't be able to receive the giveaway. Once you get the coins, you may either sell it to pocket the profit or wait in hopes that the price will grow.

To amend an open source code is pretty easy, that's why forks are prone to scams and difficulties that might cost you money. Do your homework before you choose to claim the free coins, offered by a hard fork as no one will come to rescue if something goes wrong. Responsibility is the other side of "total control of your capital". Below are the red signals that would put you on the alert:

* Aimless - the fork has no convincing philosophy and bring no improvement to the community * Faceless - developers do not disclose their real names, do not take part in discussions, or don't have relevant expertise to run the project. * Futureless - the project doesn't have a roadmap, or it is too murky, the team has no idea where they are going in the long run.

Speculating the price. Coin price tends to go down before a hard fork as people try to transfer their assets to a safe place and avoid risks associated with forks. However, news of upcoming fork with airdrop may boost the price as traders will hoard the asset to qualify for the airdrop. Once the fork is over, the hyped price usually retrace to initial levels, though, if the majority of traders are against the fork, they will sell their free coins to buy old ones, which will push the price even higher. Those who are bold enough may attempt a speculative strategy, buying ahead of the fork with the aim to sell afterward or right before the split.

Crypto futures. Some exchanges allow people to buy a new coin ahead of the fork via futures. If you believe that the new asset will have value and its price will grow after the release, go ahead and get it cheap.

2) How to survive a fork without losses

No transactions. Keep from making trades with coins that are being forked. When two different chains exist, one will eventually be proved invalid, which means that coins found on the wrong chain will be lost. Forks are very painful for merchants that work with the coin in questions due to the same reason. It means that business may stop accepting the cryptocurrency until the situation clears out.

Find safe haven. Forks are often associated with high volatility. The market may be wild and unpredictable, especially in case of a contentious fork with a lot of contradictions between the split community. If the conflict escalates, prices may fall really hard. So make sure that your crypto portfolio is well diversified and try to keep the amount of forked coin at a minimum until the dust settles.

Wallet care. Move the coins with the upcoming fork to a private wallet or make sure that your exchange promised to support the new coin. Also be careful downloading a new wallet for a forked coin until you are sure that it is not a malware, and don't trust your assets to it before it is thoroughly checked and tested.

A fork is a stressful and nervous event for a cryptocurrency community, often associated with losses and increased risks. But due diligence and common sense will help to pass through the rough times unscratched and even reap additional benefits.

A quick round up of key takeaways. What you should know about cryptocurrency forks

The information provided by FXStreet does not constitute investment or trading advice and should be just treated for informational purposes. Our content may also include affiliate links or advertising from other websites, however we are not responsible or liable for any actions of other websites. Investing in Cryptocurrencies involves a great deal of risk, including the loss of all your investment, as well as emotional distress.