Analysts at Glassnode and former Goldman Sachs executives believe that Ethereum holders could witness maximum pain before a recovery in the altcoin. Bitcoin price could likewise witness a drop in its price before the crypto bear market is over.

Also read: Is Ethereum price at risk of decline with plummeting NFT volume?

Analysts at Glassnode have assessed whether the recent recovery in Bitcoin and Ethereum prices is a bear market relief rally or a sustained bullish impulse. A decline in on-chain activity in the two assets suggests lackluster demand, and that the downtrend may still not be over despite the recent rebound from extremely oversold conditions.

Their conclusion is that the recovery is not convincing enough if it comes off the back of low demand. Bitcoin blocks are partially empty, Ethereum gas prices have hit multi-year lows and the rate of EIP-1559 burn has hit an all-time low. The Bitcoin network continues to be dominated by HODLers (those who buy and hold indefinitely), with no significant increase in new demand, therefore BTC price outlook remains bearish when viewed through the lens of on-chain activity.

Ethereum burn rate has declined, hitting an all-time low. The total Ethereum burned stands at 11% of the total issuance of the altcoin. This implies that a large volume of Ethereum remains in circulation, despite the implementation of EIP-1559. 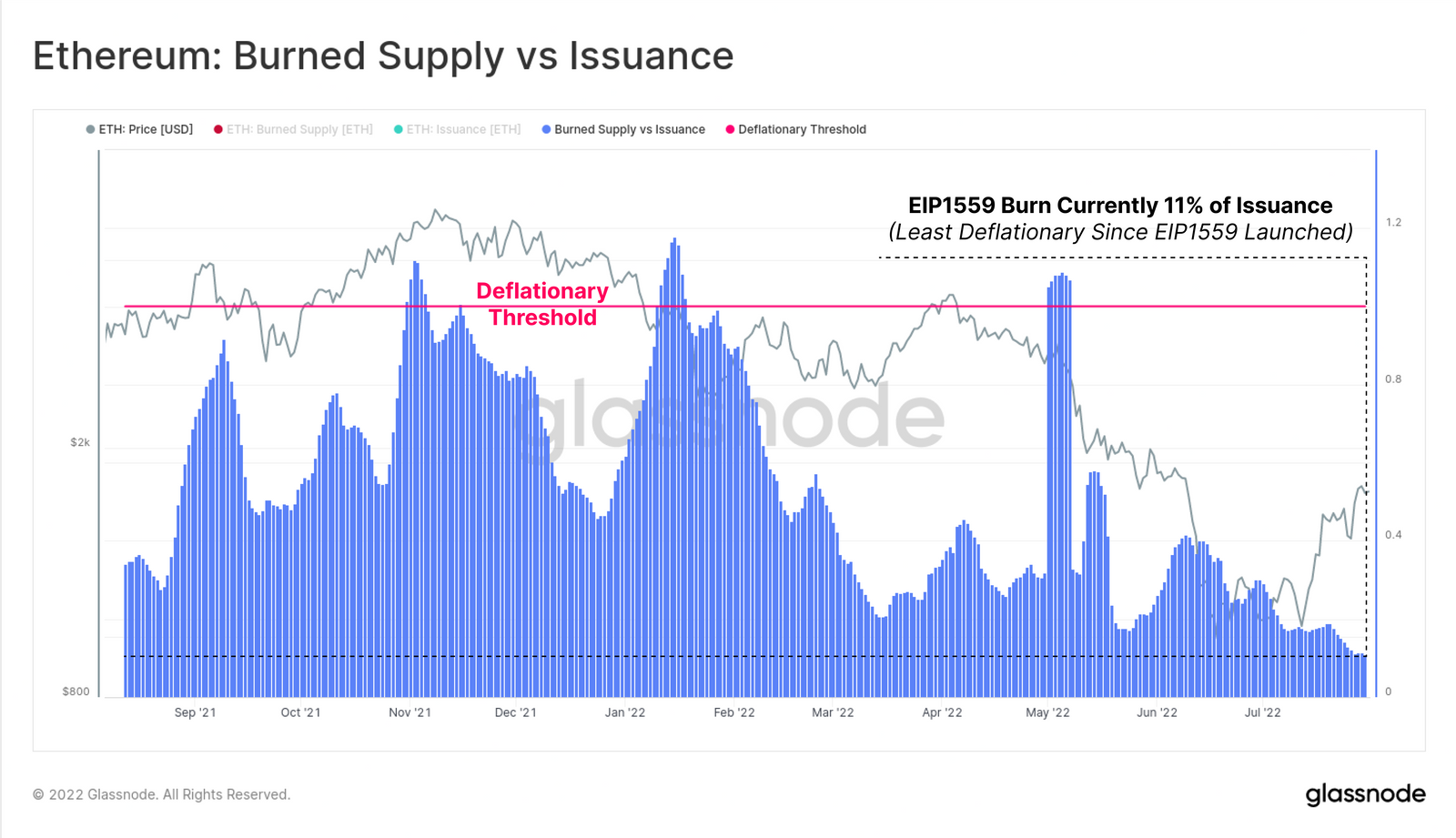 Ethereum miners generated $571 million in revenue in July 2022. Adriano Feria, a market analyst and software developer argues that most of that $571 million worth of ETH mined will be put right back on the market. The selling pressure thus caused could push Ethereum price lower, however the altcoin is set to recover once the Merge goes live.

As miners cover their operating costs by selling earned ETH, there is a likelihood of a part of $571 million hitting exchanges. However, Feria is confident that Ethereum price will recover from the setback once the transition to proof-of-stake is complete.

Most of that $571 million worth of $ETH is put right back on the market. That's sell pressure that drives the price down, but it is going to vanish when the merge goes live. https://t.co/MXPs0S6Q9Q

Raoul Pal, the CEO of Real Vision argues that there is a “general feeling” that macro conditions are so poor that ETH could drop to retest its recent low. The former Goldman Sachs executive argues that Ethereum is likely to move against crowd sentiment,

But my hunch is that the path of MAX PAIN is higher… $2,200 to $2,300 is the key one for me… a break of that either happens pre-merge or post-merge. Once everyone has got back in, the market can correct sharply before rising again based on the macro.

Analysts at FXStreet explore possibility of ETH price drop to $300

Amidst bear market woes, analysts at FXStreet are exploring the possibility of a continuation of Ethereum’s downtrend. This could result in a drop to $300, according to analysts’ prediction. For more information, check the video below: