AVAX price is consolidating in a downward sloping channel, hinting at a volatile breakout soon. However, if the bulls need a rest first, a minor retracement might develop, allowing buyers to scoop up Avalanche at a discount, before triggering the next leg higher.

While technicals are hinting at a bullish outlook, Avalanche and the XRP Ledger blockchains are now connected via ApexBridge. This development will allow users to seamlessly transfer and swap assets between the connecting blockchains.

For this purpose, Catoshi, a cross-chain bridge is joining hands with Apex, a Node as a Service (NaaS) protocol built on the Avalanche blockchain. As a result, all DEXs and DeFi protocols will be able to use this service to connect to the XRPL via the API kits.

Emin Gun Sirer, the founder of the Avalanche blockchain stated in a recent interview that despite the massive downturn in crypto markets, Ava Labs is “thriving.” He added that the number of,

people in the company is around 180… and we're growing. I think by the end of the year, we should be 250 at least. We've been in this hyper-growth phase for some time now, we're doing really well.

He also added that he is not particularly worried about the short-term take on prices due to present uncertainty around the Federal Reserve and the steps they’re taking to tackle inflation. While AVAX price is down 75% from its all-time high, so are many other Layer 1 tokens. Regardless, the technicals are showing two outlooks that present a massive rally is on the horizon

AVAX price has set up four distinctive lower highs and two lower lows since May 12. Connecting these swing points using trend lines reveals a descending parallel channel. This technical formation leans toward a bullish breakout and confirmation is obtained after a decisive flip of the upper trend line into a support level.

Considering the state of Bitcoin price and the need for a pullback, AVAX price might also do the same. Investors need to be prepared for a retracement that pushes the altcoin down to the immediate support floor at $22.43.

A retest of this level will likely be met with buyers scooping the altcoin up at a discounted price, which will catalyze the breakout and an upswing. The resulting rally could propel AVAX price up by 70% to the first hurdle at $38.48 but could also extend up to $41.17.

In total, the move from $22.43 to $41.17 would almost double the price of Avalanche tokens, making it an amazing opportunity for patient investors. 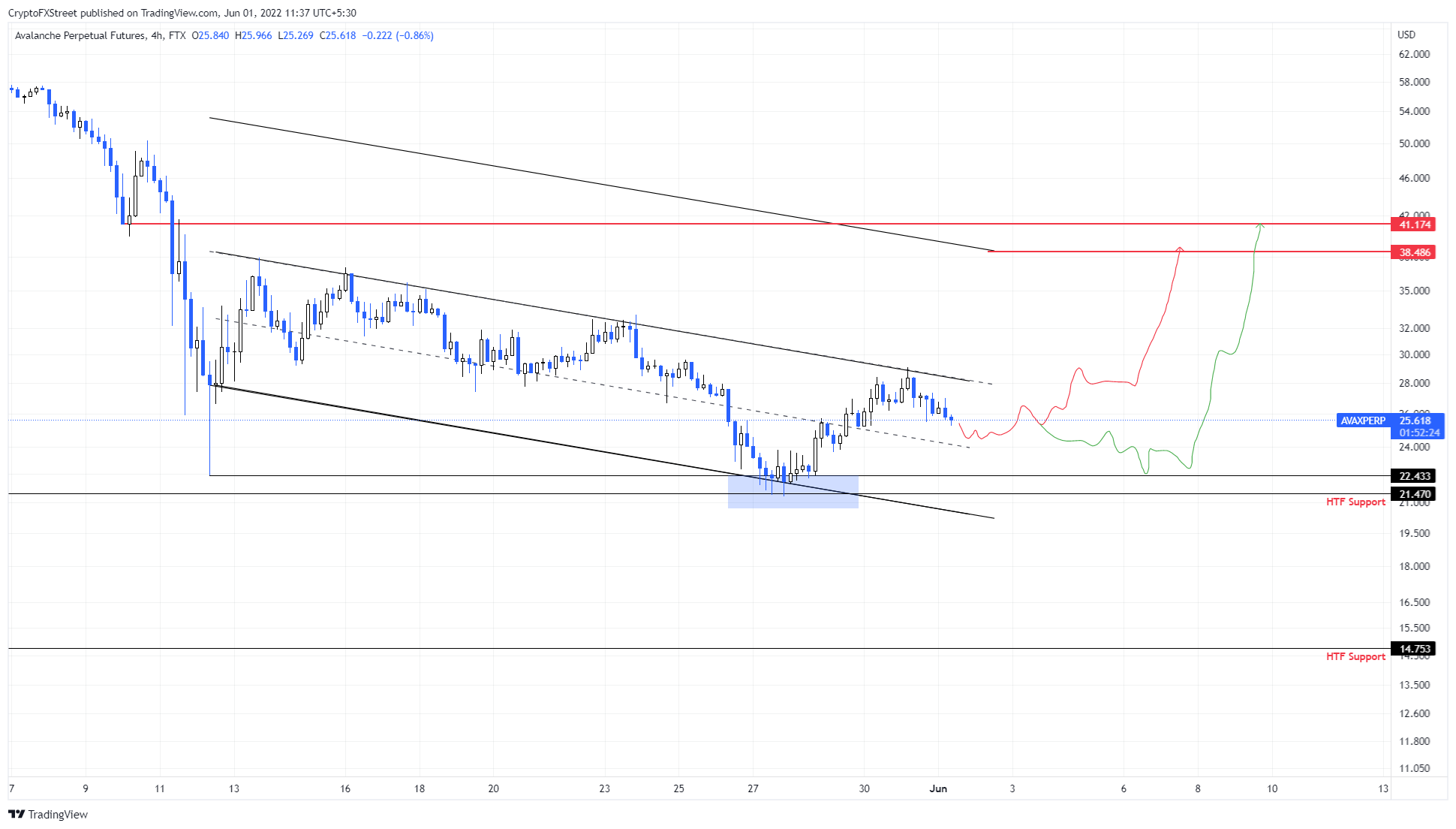 While things are looking up for altcoins, a sudden downturn in Bitcoin price could ruin the bullish setups. The same holds true for Avalanche bulls as well; a four-hour candlestick close below $21.47 will create a lower low and invalidate the bullish thesis.