Bitcoin price may hit $60,000 before pulling back

Bitcoin price action has been in massive bullish rise over the past few weeks that bulls and bears alike expect a pullback. However, that may not occur. Bitcoin has already made new 2022 highs, and if it has a daily close that puts BTC positive for 2022, that could trigger some major institutional positioning.

Institutions often look for yearly highs and lows to be established in January and July – if an instrument is trading above the January open, positions are frequently bought, added, and supported. If an instrument is below the January open, positions are often sold and reduced. However, when a ceiling is broken, institutions often switch the position management to turn that ceiling into a new floor.

In other words, if institutional participation displays historically normal behavior and positioning, then Bitcoin price may see the $47,500-to-$48,000 price range as the new 2022 ‘low’ until July. The next price zone to test as resistance is the $50,000 value area in that scenario. 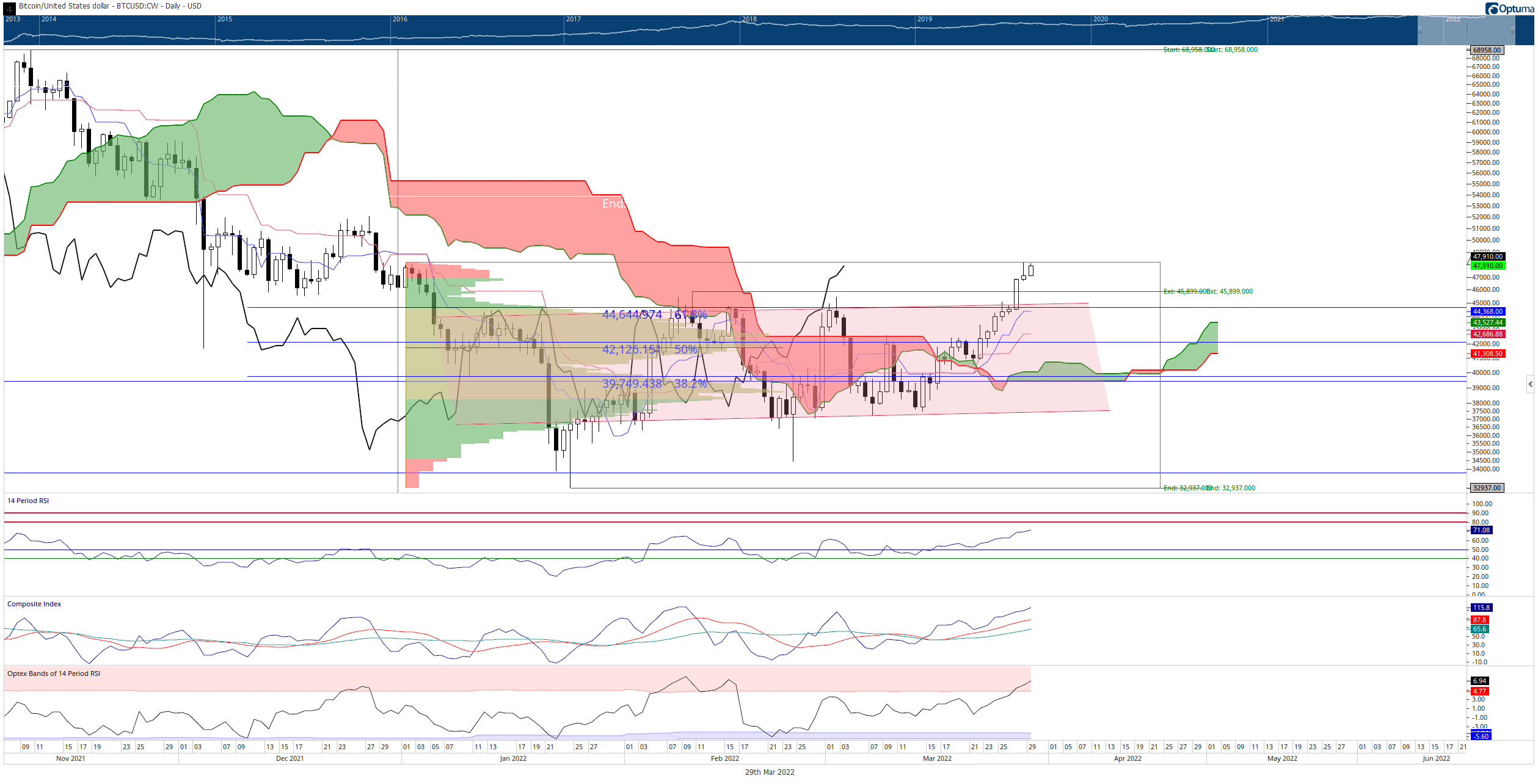 However, confirmation is needed to make sure there is a change in institutional positioning. There is a strong likelihood that Bitcoin price and the broader cryptocurrency market may experience some profit taking for the remainder of the week. Bitcoin price would likely return to the breakout of the bear flag at $44,725, where the daily Tenkan-Sen ad 61.8% Fibonacci retracement currently exist.

Ethereum price faces a big test at $3,500, which may create a bear trap

The first resistance zone was the 38.2% Fibonacci retracement at $3,300, which ETH closed above on Sunday. The next major resistance level is $3,500, where the weekly Kijun-Sen and 100% Fibonacci expansion exist. Bulls and bears alike anticipate profit-taking at $3,500, but that may not occur.

The daily Relative Strength Index remains in bull market conditions and is not yet at the first overbought level of 80. This suggests that Ethereum price could continue to push higher to at least the $3,800 value area. But even if that occurs, buying pressure may not cease. The weekly Relative Strength Index is just coming out of a long congestion zone of trading between the oversold levels of 40 and 50 since the beginning of 2022. 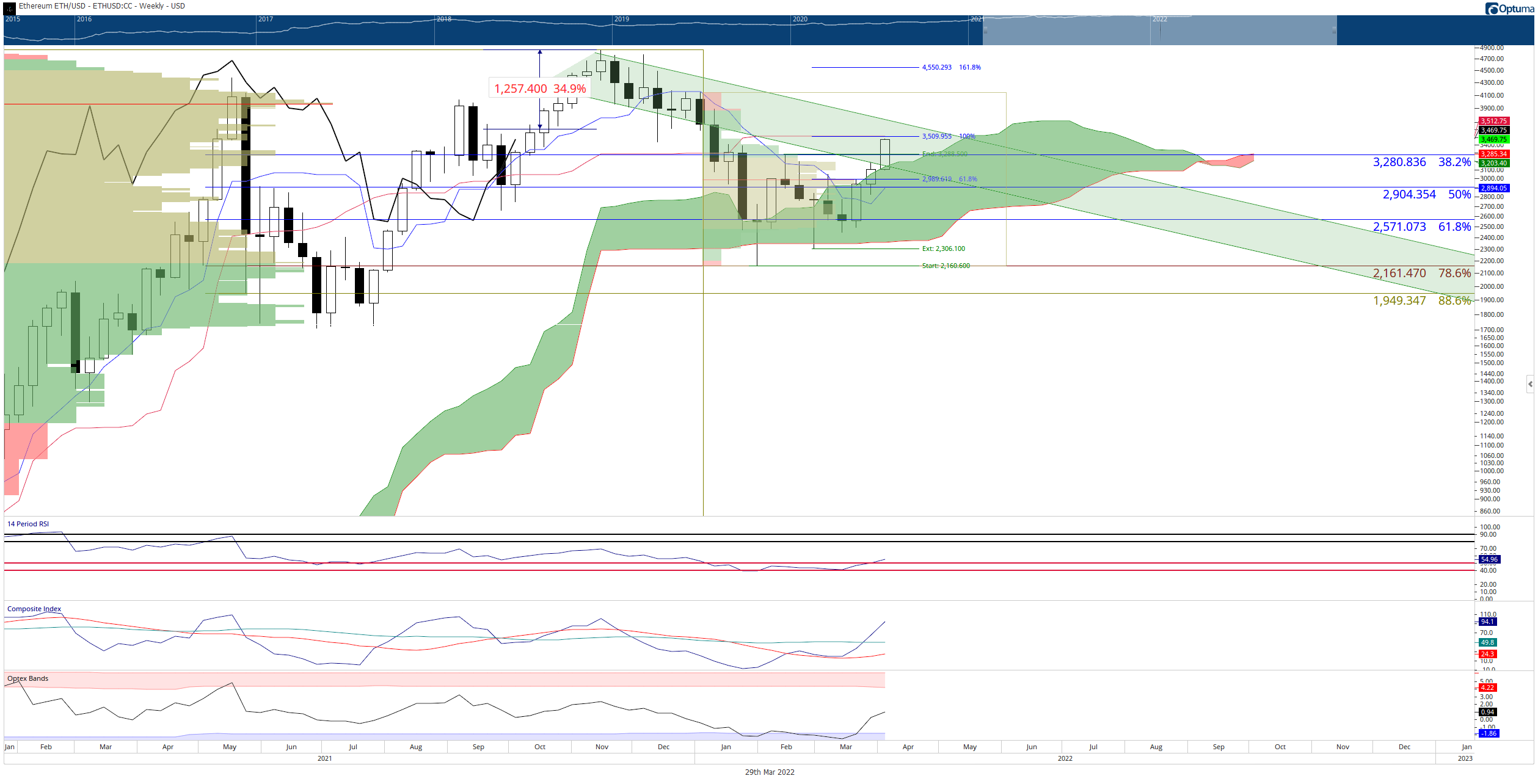 Upside potential could extend as high as the 161.8% Fibonacci expansion at $4,550. Downside risks are likely limited to the bottom of the bull flag and top of the Ichimoku Cloud (Senkou Span A) at $3,175.

XRP price action experienced a big whipsaw on Monday, gaining as much as 5.5% before losing the majority of those gains to settle at a modest 0.8% gain. The candlestick that developed is a naturally bearish one that likely enticed some short sellers to open new positions. However, that may have been the intention, especially given XRP’s behavior with the Tenkan-Sen.

One of the most critical warnings within the Ichimoku Kinko Hyo system is to avoid trading against an instrument trending in tandem with the Tenkan-Sen – sometimes referred to as holding hands due to how close they are. XRP has steadily moved higher over the past two weeks, with price and the Tenkan-Sen remaining very close together. Behavior that is likely to continue. 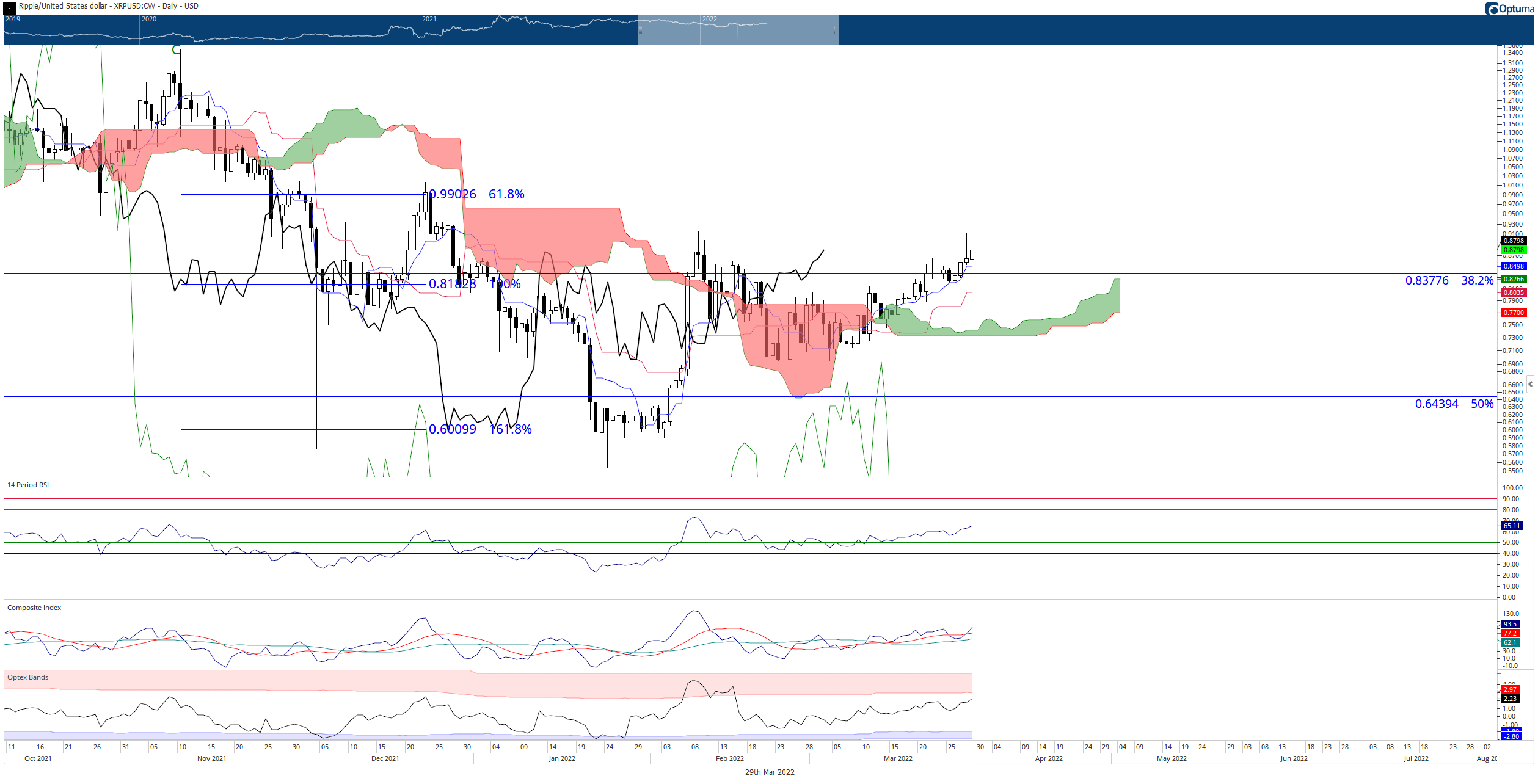 From an Ichimoku perspective, there is little in the form of resistance to prevent XRP price from revisiting the $1 value area. Additionally, downside risks should be limited to the $0.70-to-$0.75 price ranges.