Bitcoin price shows that a correction is still underway, but Ethereum and XRP seem to be gearing up for a move higher.

Bitcoin price showed exhaustion of buyers before hitting a local top at $57,184 due to the Momentum Reversal Indicator’s (MRI) reversal signal in the form of a red ‘one’ candlestick.

This setup forecasts a reversal in a trend that may extend from one to four candlesticks. This pullback is likely to bounce from the 50% Fibonacci retracement level at $51,600. However, if the sellers break down this barrier, then the demand zone ranging from $50,128 to $51,005 will serve as a foothold for the buyers to make a comeback.

On the flip side, if buyers fail to rescue the flagship from either of the mentioned support levels, the bullish thesis will face invalidation. In that case, investors can expect a 5% retracement to $47,436.

Ethereum price on the verge of another rally

Ethereum price is ahead of the curve as it is already near its pullback target around $2,543. Hence, if buyers decide to scoop up the smart contract token at a discounted price, it could trigger a move to the recently set up all-time highs at $2,716.

If this were to happen, sidelined investors might jump on the ETH bandwagon due to FOMO and propel it higher. The 162% Fibonacci extension level at around $3,000 seems to be the next target for investors. 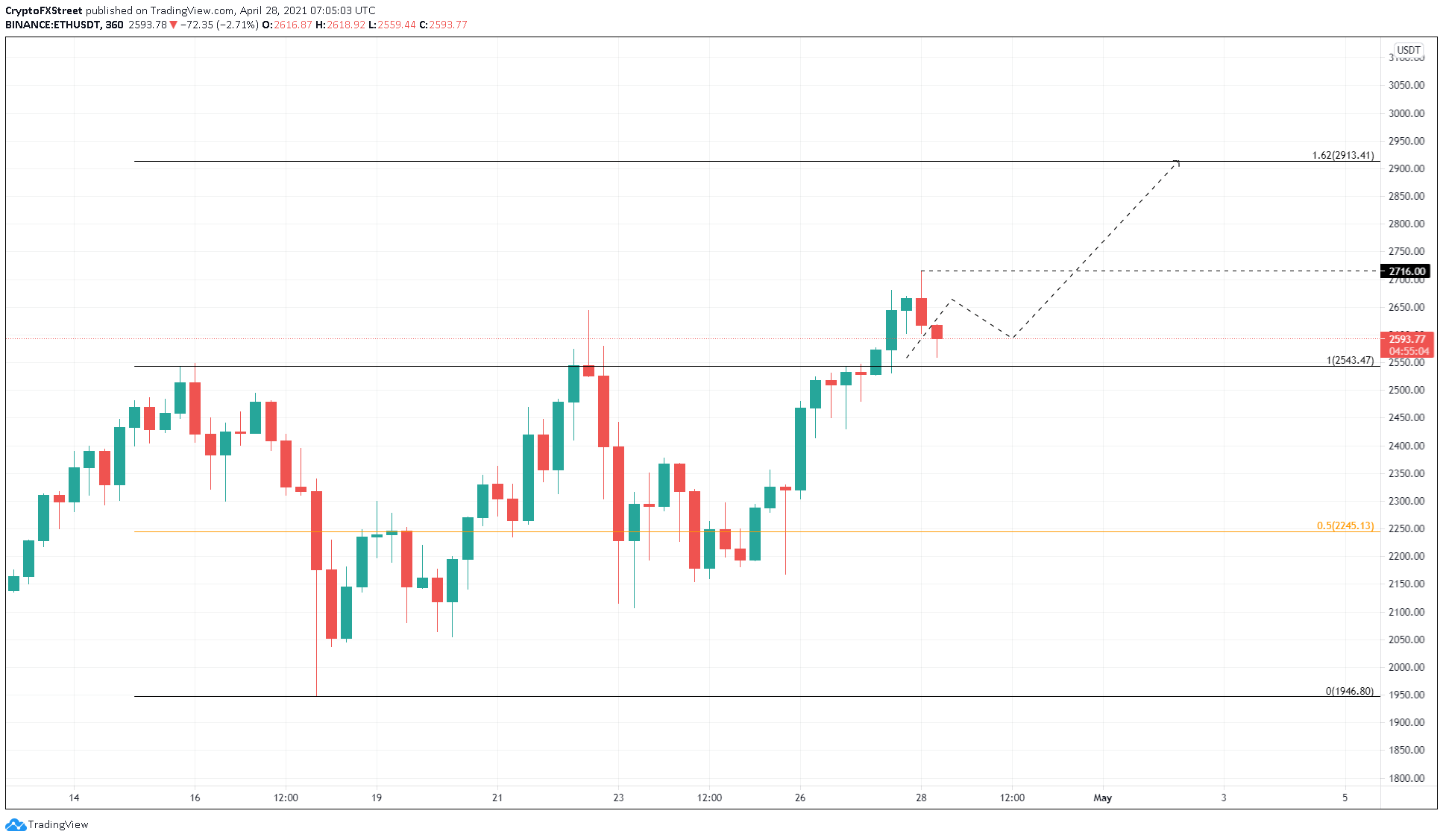 While things seem to be going up for Ethereum price, a sudden spike in selling pressure that ETH below the support level at $2,543 would put the upside narrative in jeopardy.

A breakdown of the demand barrier at $2,425 would invalidate the bullish outlook and kickstart a correction to $2,328 or the 50% Fibonacci retracement level at $2,245.

Ripple readies itself for bull rally

XRP price faced rejection around the swing high at $1.49, which resulted in a pullback to the  50% Fibonacci retracement level at $1.32. Now, a bounce from this level would allow the buyers to take another jab at $1.49.

Should the bullish momentum be enough to slice through this barrier, XRP price would target the 161.8% Fibonacci extension level at $1.69. If the bid orders keep piling up, $1.82 could be the next area of interest for investors.

Ripple’s bullish thesis depends on a bounce from $1.32. Therefore, a sudden burst of selling pressure that breaks down this barrier will invalidate the optimistic narrative surrounding XRP and lead to a 6% pullback to $1.24.