XRP price is a minor surge away from retracing toward its pre-crash levels. Interestingly, this sudden ascent occurred within the last 24 hours.

After the recent collapse, XRP price found support at $1.03, the previous weekly close. On the 4-hour chart, Ripple bounced twice from this level and surged nearly 40% to $1.40, coinciding with last week’s open and the 100 Simple Moving Average (SMA).

The best-case scenario for XRP price would be a minor consolidation inside the 12-hour demand zone that extends from $1.22 to $1.41 before resuming its uptrend. In such a case, the bulls could build up momentum that will allow them to push it up 23% to the next swing high at $1.74.

Surpassing this level could help XRP price reach a yearly high at $1.98.

Adding a tailwind to this bullish outlook is the SuperTrend indicator’s buy signal that has flashed for the first time since March 30. 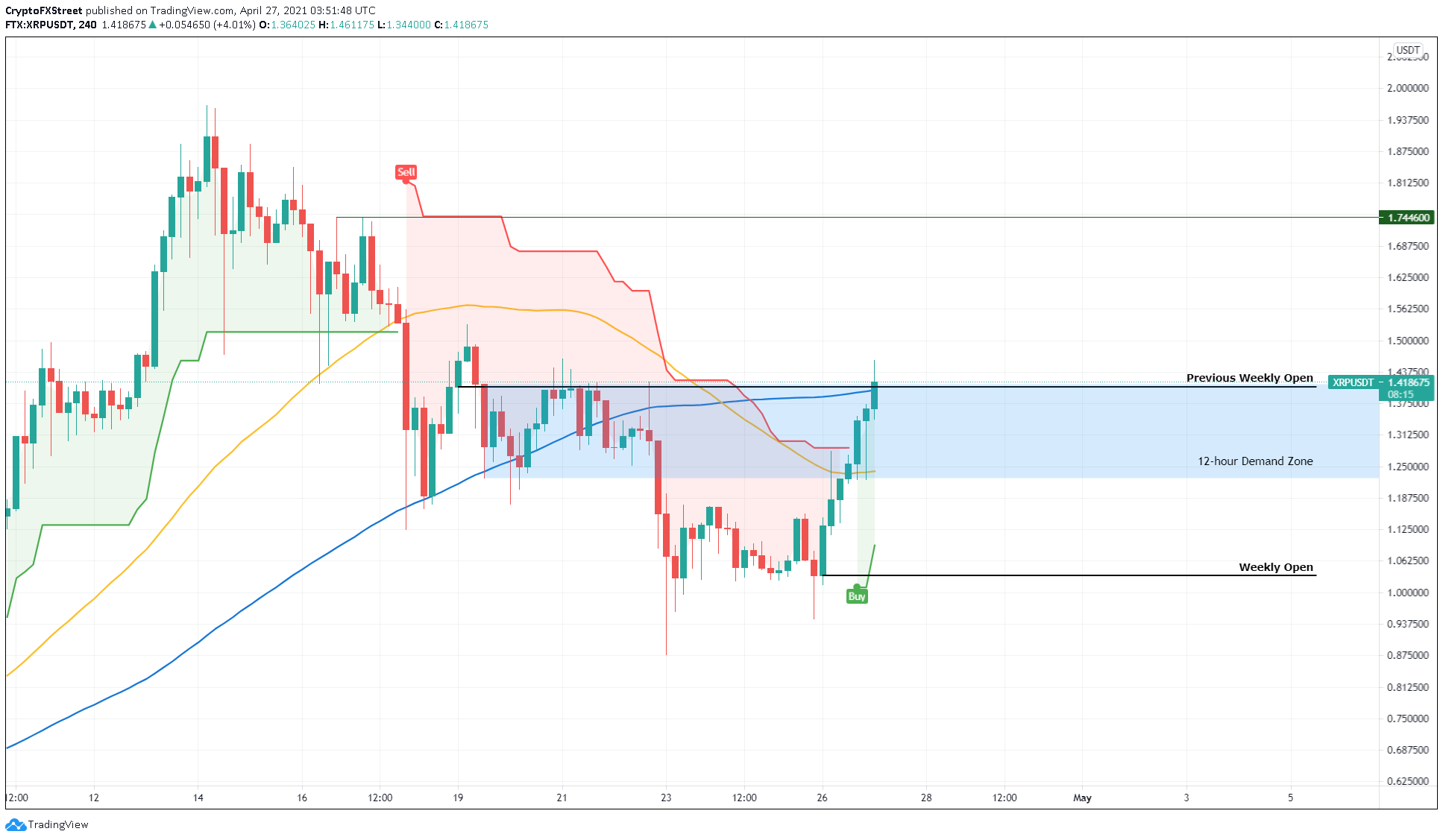 Upholding the overall optimistic narrative is the near-zero funding rate, which implies that investors are not crowding in to open long positions despite a 40% pump in XRP price.

Santiment’s 30-day MVRV model tracks the average profit/loss of participants that acquired XRP in the past month. This metric points that 32.9% of addresses are in profit. Although this level is not near an average top, minor profit-taking might ensue at the current price levels, leading Ripple into a consolidation phase.

Overall, XRP price remains in a safe zone despite approaching a critical barrier at $1.40. Now, a consolidation followed by a breach in this zone could spark a 25% upswing to $1.74. However, if the sellers overwhelm the buyers leading to a decisive close below the 50 SMA at $1.24, it would jeopardize the upward move.

If XRP price shatters the $1.20 support barrier, it will invalidate the bullish move and trigger a 10% move to $1.09.

Dogecoin price has seen a massive surge after Elon Musk’s recent tweet revealed that he is working with the developers of the meme coin to improve its transaction efficiency. With DOGE approaching a critical point in its uptrend, more gains stand to be realized if buyers push through.

Ethereum Classic price surged by over 400% during the first week of May, creating a new all-time high at nearly $180. ETC has retraced since then by over 50% and is currently trading at $0.87. Now, this cryptocurrency seems prime to resume its uptrend as it tries to break out from a continuation pattern.

Ripple reversal could result in 30% advance

XRP price has witnessed a massive crash due to the Tesla-induced market crash on Wednesday. Now Ripple could either test the immediate demand barrier or slice through the supply zone to rally higher.

Bitcoin price underwent a severe nosedive as Elon Musk revealed Tesla’s decision on accepting payment in BTC. This development was the major highlight of the week, with the recent mining difficulty adjustment coming in at a close second.