Shiba Inu price has trended lower in a descending parallel channel since the May crash, offering only brief opportunities from low probability patterns or setups. The weak performance is a marked deviation from the extreme price events in early May when SHIB climbed almost 2,000% from May 7 to May 10. Thus, an unfriendly chart outlook mixed with a deteriorating fundamental situation and a bearish trend in an on-chain metric raises the probabilities of a sharp break to the downside from the tightening price range.

Shiba Inu price closed up only 2% on the news that eToro was listing Shiba Inu on their multi-asset investment platform. The bleak response to the opportunity of over 20 million investors having access to trade the meme token encapsulates the waning interest in the cryptocurrency as the multi-week price drift has shaken the bullish consensus and fractured the underlying FOMO that catapulted SHIB higher in April and May.

An additional indictment of the waning interest in Shiba Inu is the plunge in the ShibaSwap DEX total value locked (TVL) from the July 14 high of $1.76 billion to just $389.34 million as of today, representing a 77% fall in less than a month.

It is an embarrassing turn of events from the launch in early July when ShibaSwap DEX hit $1.50 billion in total value locked in less than 48 hours. Actually, the stampede of users rushing to stake on ShibaSwap sent Ethereum’s gas fees through the roof.

A final example of the limited interest in SHIB is the steady, low levels in the social media volume. The Santiment Social Volume metric captures the number of mentions of SHIB on 1000+ crypto social media channels, including Telegram groups, crypto subreddits, discord groups and private traders chats.

Excluding a brief rise in the social volume in mid-July, social media interest has remained stagnant, including during the launch of ShibaSwap in early July and following the eToro announcement.

The latest Daily Active Addresses metric published by Santiment shows that the number of unique addresses involved in SHIB transactions daily continues to decline from the early July spike when ShibaSwap went live. The relentless fall has pushed the 7-day moving average to the lowest reading since early May, signaling that the daily level of crowd interaction or speculation with the token has erased the spike associated with the jump in Shiba Inu price in early May.

FOMO has left the building,

The notable price compression reveals that SHIB is near a sharp move in the coming days. With the general trend being down and confirmed by the declining 50-day SMA, there is a high probability that Shiba Inu price will register a daily close below the May 19 low soon. A definitive close below the tactically important level should introduce a sharp move to the lower line of the descending parallel channel around $0.00000333, equaling a 45% decline from $0.00000607. 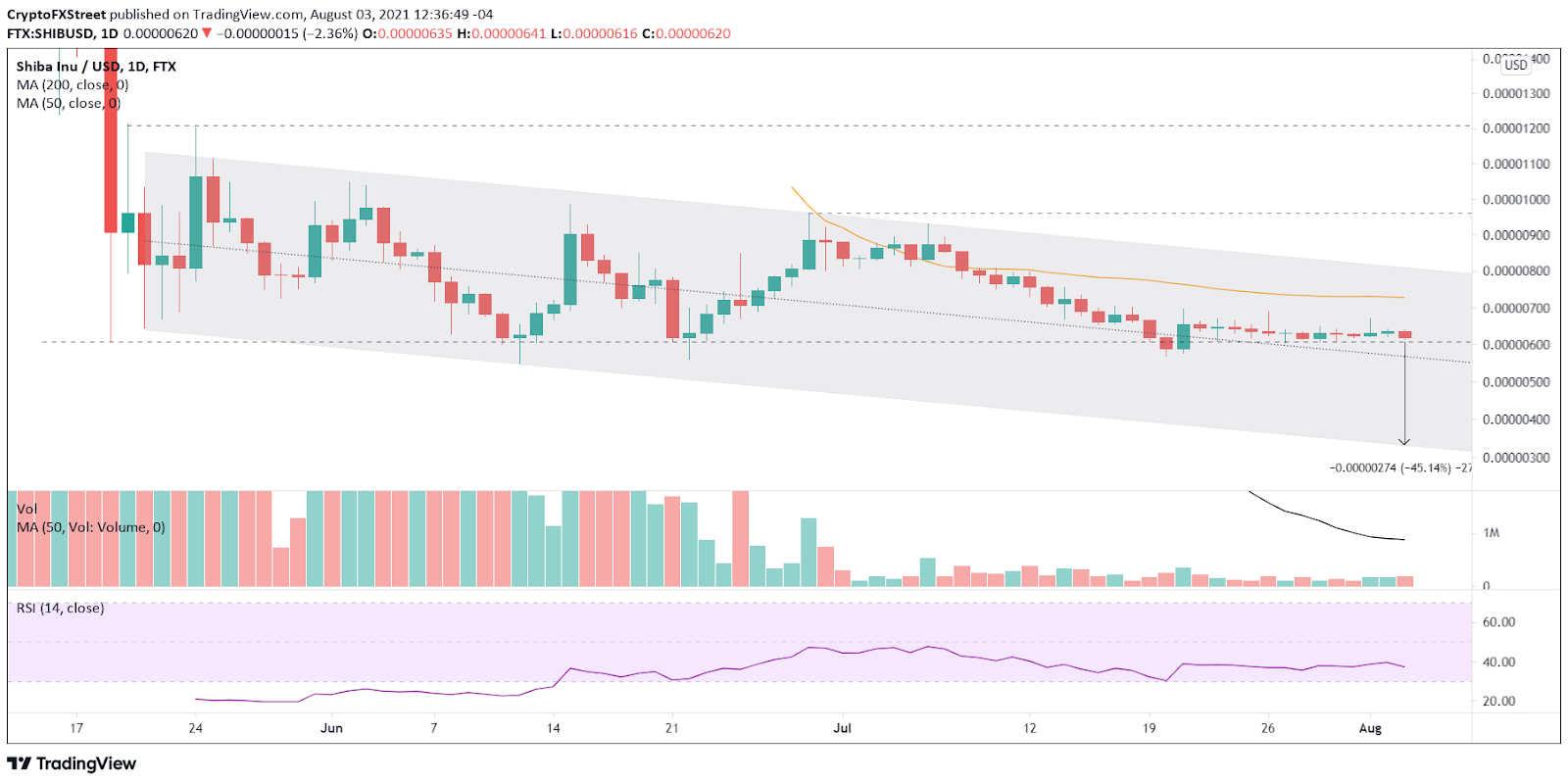 Shiba Inu price is at a crossroads in its short life. However, the lack of interest in the eToro announcement, the absence of social media volume, the rapid descent of the ShibaSwap DEX TVL and a price structure that is definitively tilted to bearish outcomes places SHIB in a vulnerable position moving forward.