The merger between SushiSwap and Yearn.Finance has sparked conversations across social media platforms. This high social volume has also seen SUSHI and YFI tokens hit new highs. As the news settles, what is in the offing for these decentralized tokens?

Social media volume skyrockets in the wake of the merger

Yearn.Finance and SushiSwap merged on December 1. The collaboration entails several synergies to develop resources and integrate the projects' liquidity pools to bring up the total value locked. For instance, Yearn has committed to developing xSushi vault that will be used to farm SUSHI, Ethereum (ETH) and Wrapped BTC (wBTC).

The merger caused an uproar on social media platforms, with the Tweet volumes going up 288% for SUSHI and 61% for YFI. For the very first time in history, tweets mentioning SUSHI overtook YFI's.

The cryptocurrency community has reacted with some people expressing their disappointments regarding the merger. On the other hand, the conversations reached people who had never heard about Yearn.Finance and SushiSwap.

For instance, Twitter user 'hot girl capital management,' not her real name, said: "What are both of these altcoins? What world do I live in? I have owned $BTC and $ETH since before the internet got obsessed, and I still feel like a crypto grandpa…" 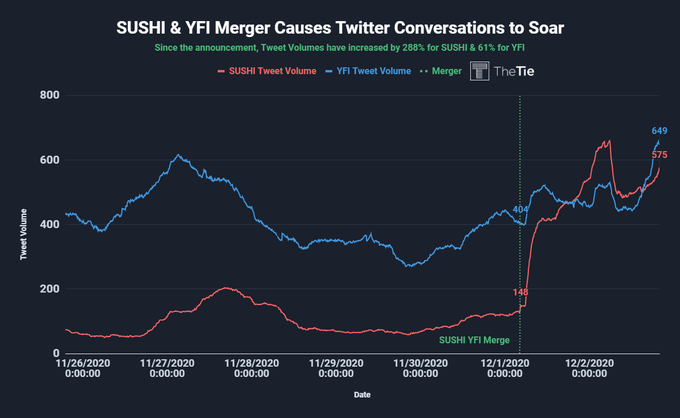 Some conversations were useful and tried to explain how people can benefit from collaboration. 'The TIE,' another Twitter user, confirms this, saying that "these conversations became increasingly more positive after the merger announcement, as indicated by The TIE's Hourly Sentiment Score." Investor sentiment for SUSHI has skyrocketed from 57 to 93, while YFI has received an impressive boost as well. 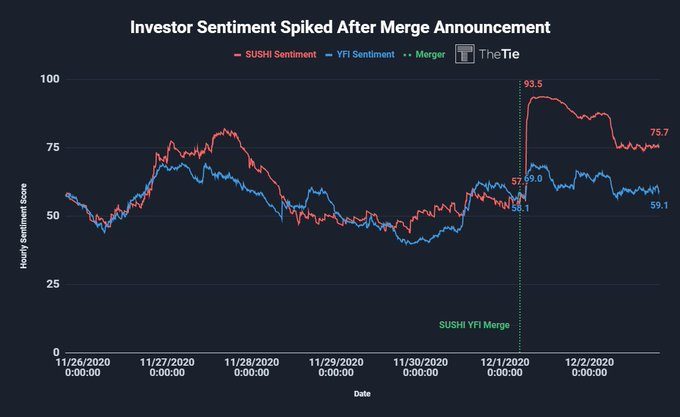 Yearn.Finance embarks on a retreat after the merger

YFI has hit highs around $32,000 after the price spiked by more than 30% from $24,400 on Tuesday. The token has slipped under $30,000 while bulls rush to defend higher support. The Relative Strength Index has reinforced the correction after sliding from the overbought area.

In case higher support is not established, YFI/USD might resume the downtrend to $24,500, critical support highlighted by both the 50 Simple Moving Average and the 100 SMA. If declines extend under $20,000, the 200 SMA support currently at $19,300 will come in handy.

SUSHI soared 51% following the merger announcement. The once-troubled token appears to be gaining traction in the decentralized finance (DeFi) sector. The spike hit a high at $2.4, leaving $2.5 untouched.

At the time of writing, a correction is underway, with SushiSwap doddering at $2.1. If SUSHI closes the day under $2, the next rendezvous might be $1.5, as illustrated by the 50 SMA and the 100 SMA. Losses to $1 are unlikely, but the 200 SMA will absorb some of the selling pressure if they come into the picture.