SHIB price has been sealed in a downward trend since mid-May, struggling to record higher highs.

SHIB price has been trapped within a bearish chart pattern since May 19, creating lower highs, failing to break above the declining trend line.

On the 4-hour chart, SHIB price appears to be trading back within a descending triangle chart pattern, formed by its lower highs as the upper declining trend line, and a horizontal trend line marking the pattern’s bottom.

On June 12, Shiba Inu price broke below the pattern’s lower trend line, hinting at the possibility of a lower target to be reached for SHIB.

The canine-themed cryptocurrency quickly recovered to trade within the descending triangle once again, even rallying to tag the upper trend line at $0.00000982 after Coinbase announced that the crypto exchange would list SHIB.

Amid the wider crypto market crash due to growing bearish sentiment, SHIB failed to sustain trading above the lower trend line at $0.00000633, adding fuel to the recent weakness. 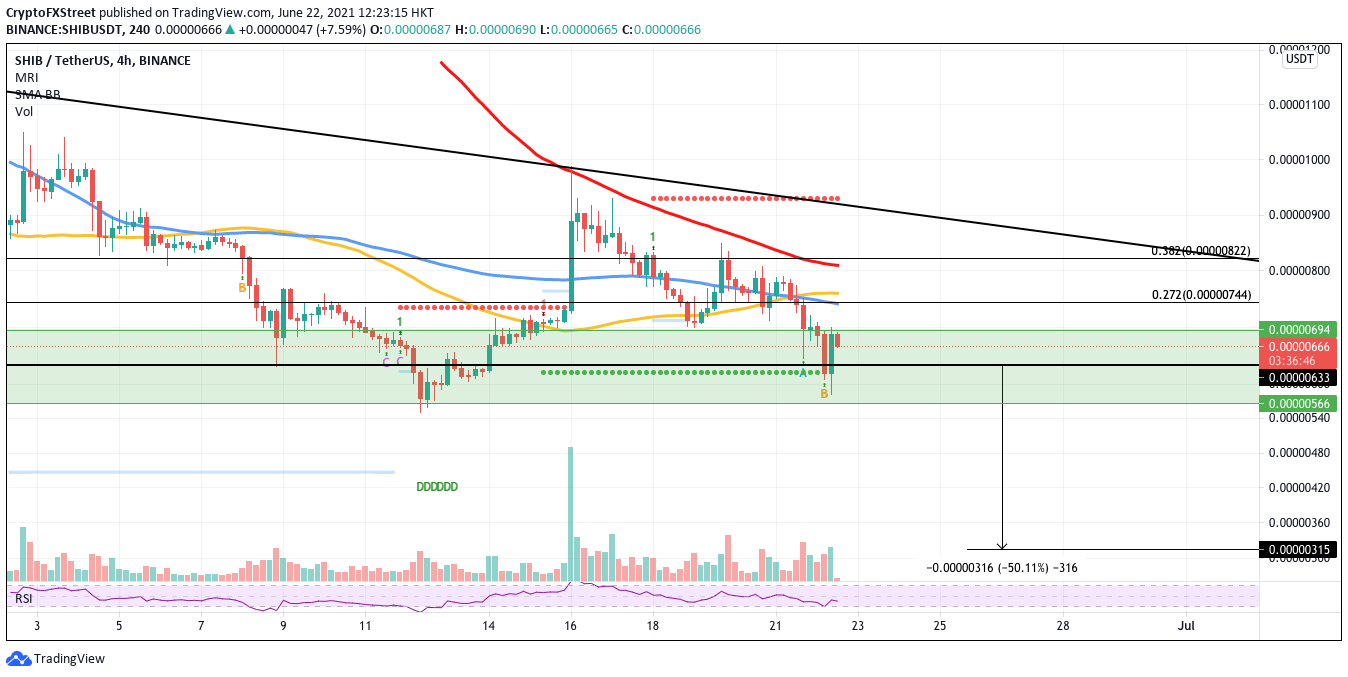 Shiba Inu has recovered 16% from its swing low as the ongoing downtrend retreated slightly and SHIB price was saved by two buy signals on the 4-hour chart on June 21 and June 22 respectively.

Shiba Inu is back in familiar territory within the descending chart pattern as indecision mounts. However, SHIB price is still currently trading within the critical demand zone that ranges from $0.00000566 to $0.00000694.

Should SHIB price manage to rally above the higher boundary of the demand zone at $0.00000694, the dog-themed cryptocurrency could see a 10% rally from the current price to tag the 27.2% Fibonacci extension level, coinciding with the 100-four hour SMA.

Investors should note that even if SHIB price manages to confirm accelerating interest, a possible rally would be met with multiple obstacles ahead, given by the 50-four hour SMA and the 200-four hour SMA.

Failing to hold above the critical level of support indicated by the horizontal trend line at $0.00000633 might spell trouble for the bulls, with a 10% decline expected if SHIB bears manage to take control.

Should further bearish sentiment take charge of the markets, SHIB price may be inclined to retest the low of $0.00000566 before envisioning a 50% decline from the horizontal support level to $0.00000315.