Ripple took another legal jab at the U.S. Securities and Exchange Commission (SEC) that could tip the scales in its favor. A positive outcome from the new motion could benefit XRP price in the mid-to-short term scenario.

A letter sent to Analisa Torres, a United States district judge of the Southern District of New York, on Monday addresses that the SEC’s anticipated motion to strike Ripple lacks fair notice. The distributed ledger startup also added that the regulatory agency allowed XRP to flourish without providing legal clarifications.

Ripple stated that such a motion is “meritless” and is “disfavored” in the 2nd U.S. Circuit Court of Appeals in In re von Bulow.

... The SEC’s burden is further insurmountable because a lack of fair notice defense involves factual inquiry that makes it particularly unsuitable to resolution at the pleading stage. No wonder the SEC has cited no case in which a federal court has struck a fair notice defense.

While the meritless claim was just the start, Ripple provided additional information on why SEC's move to strike the defendant's 'lack of fair notice' defense will not be valid.

Although the lawsuit could go either way, XRP price looks primed for an upswing.

XRP price has seen a massive 33% correction in the last month. The downswing comes as the remittances token created the third higher high since late December 2020. Interestingly, the recent retracement also formed the third swing low since then.

An ascending parallel channel seems to form when the swing highs and lows are connected using trendlines.

During the 33% pullback, this cryptocurrency came extremely close to breaching this technical formation’s lower boundary. However, the 61.8% Fibonacci retracement level at $0.43 seems to have done an excellent job preventing XRP price from dropping lower.

The presence of “State Trend Support” formed by the Momentum Reversal Indicator (MRI) around $0.38 also provides XRP a foothold to climb higher. Hence, a bounce from the channel’s lower trendline seems more than likely.

If this were to happen, XRP price could surge by 63% to $0.75, where the MRI’s“breakout line” is currently hovering at. A spike in bullish pressure leading to a decisive close above this level would be highly bullish for this altcoin.

The remittance token could then surge up to $1.18, coinciding with the 127.2% Fibonacci retracement level. 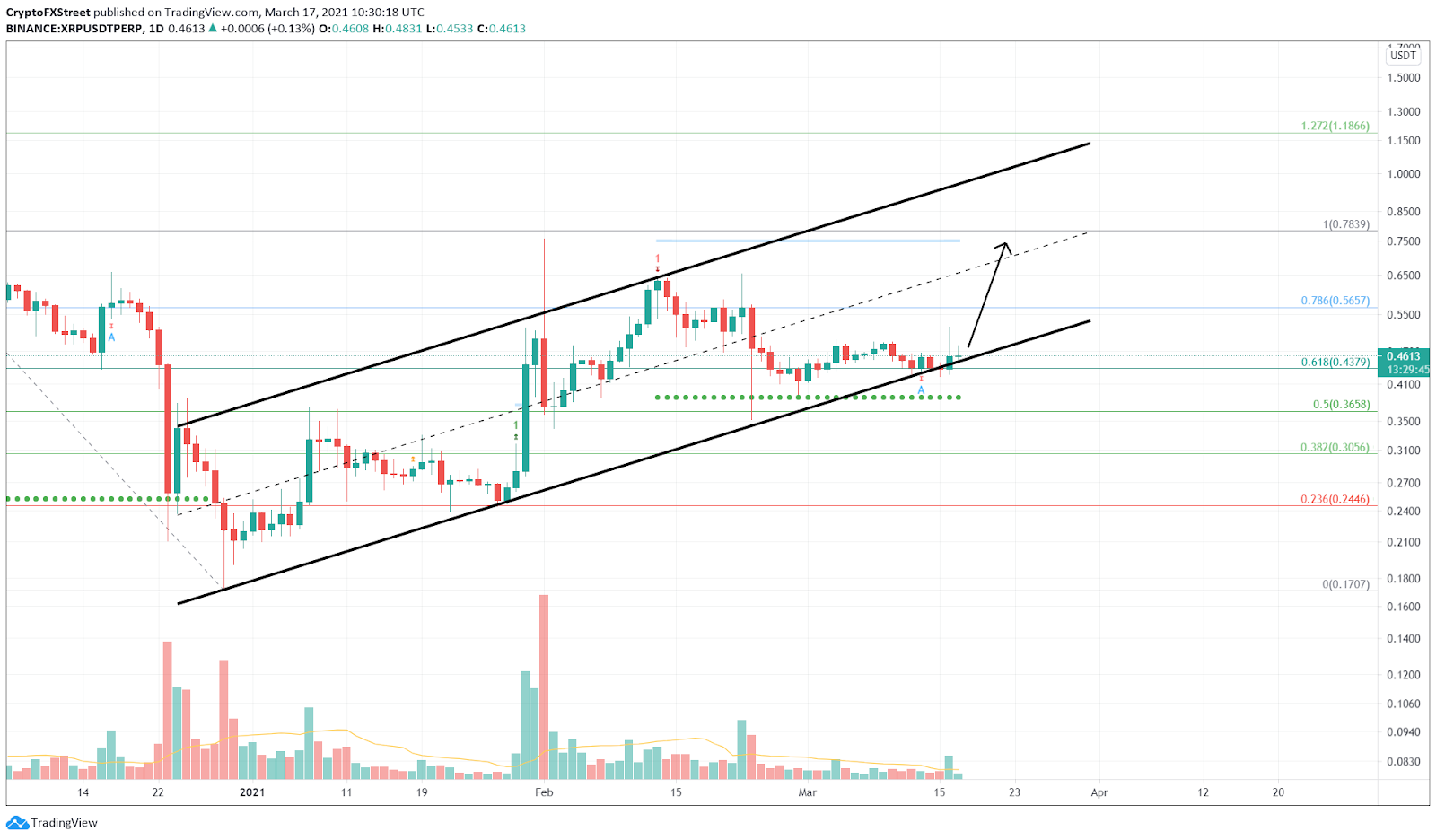 Regardless of the strength of the aforementioned support barriers, a swift breakdown of the $0.36 level due to an unforeseen event could spell disaster for XRP, invalidating the bullish outlook.