The long-awaited Ethereum London hard fork went live on August 5, which sent ETH price rallying to above $2,800 as one of the new Ethereum Improvement Proposals (EIP) kicked off the burning of Ether at block 12,965,000.

Ethereum price rallied ahead of the London hard fork as investors hope that Ether would become a deflationary asset, and the upgrade would solve the issue of high gas fees.

The latest upgrade to the Ethereum blockchain introduced five new Ethereum Improvement Proposals, including EIP-1559, which aims to improve the network’s user experience and value proposition.

EIP-1559 changed the way transactions are processed on the blockchain and puts forward an algorithm that automatically sets the price of gas.

The upgrade also involves a burning mechanism, which destroys a portion of Ether – that could introduce some deflationary pressure on ETH.

However, only under the condition that the burned fees exceed the issuance of new Ether would only see ETH becoming a deflationary asset. Nic Carter, Castle Island Ventures, added that this would only occur “at times of extreme fee intensity.”

While EIP-1559 comes with benefits, including reduced transaction costs and relieving network congestion, miners were put at a disadvantage with lower mining rewards.

Miners would not be able to receive the same amount of income they made prior to the London hard fork. However, Matt Hougan, the chief investment officer at Bitwise Asset Management, explained that due to the fact that miners are organically linked to the overall value of Ether, they could make up for these losses if Ethereum price rises owing to the protocol changes.

Ethereum co-founder Vitalik Buterin added that the London hard fork makes him “more confident about the merge” to ETH 2.0 that is expected by early 2022.

Ethereum price on track to target $3,000

Ethereum price has rallied following the London hard fork, surging to above $2,800 for the first time since June 7. There seem to be limited obstacles ahead for ETH as it eyes its next target on the upside.

Ethereum price has printed 15 green candles starting on July 21, as investors were enthusiastic ahead of the upgrade. The next bullish target for ETH is at the 50% Fibonacci extension level at $3,058 with minimal hurdles ahead. The bulls must conquer the May 20 high at $2,983 before securing its next aim.

However, investors should also pay attention to the Relative Strength Index (RSI), which suggests that on a technical level, ETH may be slightly overbought. 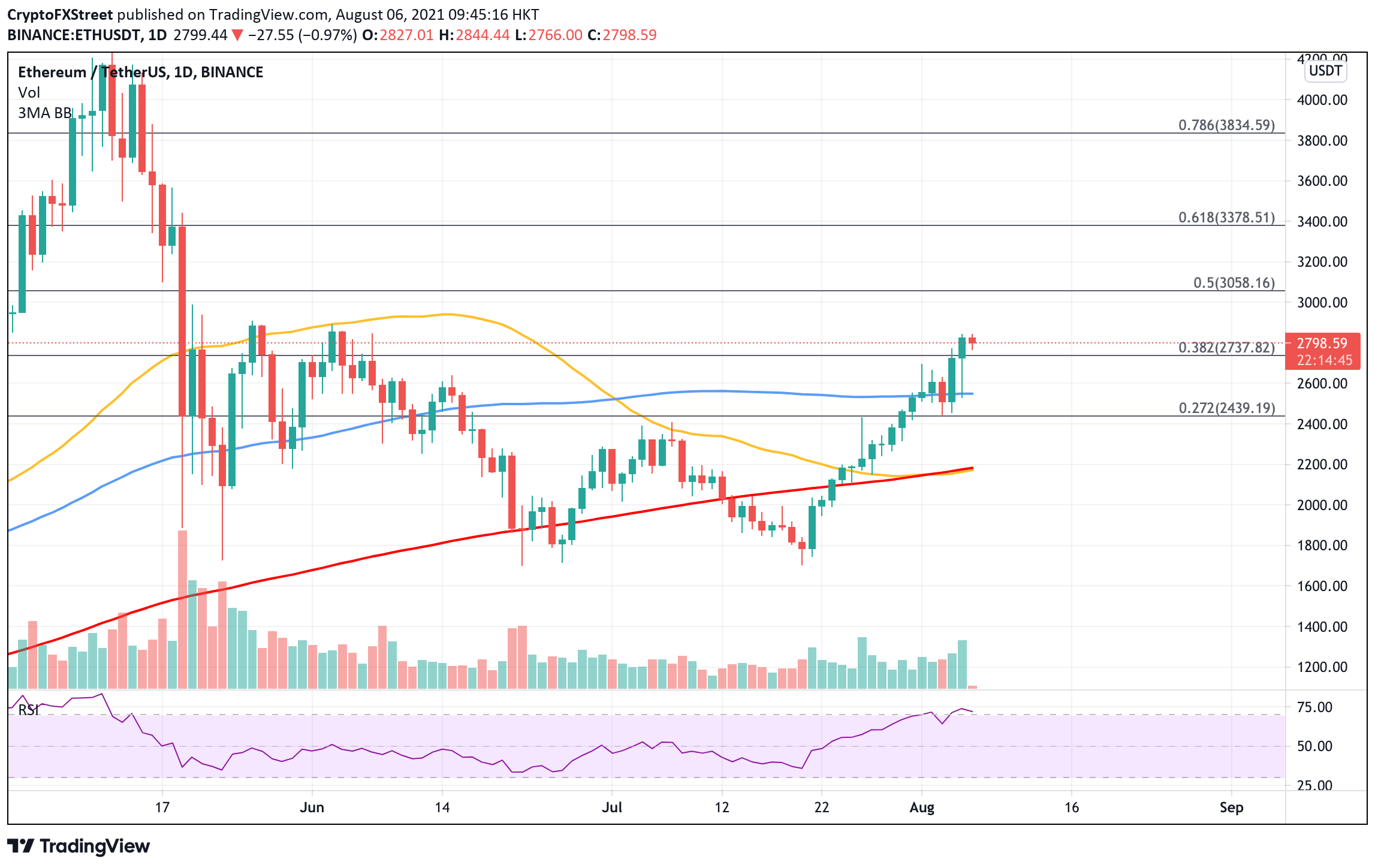 IntoTheBlock’s In/Out of the Money Around Price (IOMAP) also adds credence to the theory that there is little resistance ahead for ETH, as the volume clusters Out of the Money appear to be insignificant, while support appears to be substantial.