Large wallet investors on the Ethereum network are keen on accumulating meme coins like Shiba Inu to diversify their portfolio. Typically whales have scooped up SHIB during a dip in the meme coin’s price.

Ethereum whales have consistently accumulated Shiba Inu in their wallets as a means of diversifying their portfolio. Typically when Shiba Inu price declines, whales scoop up the meme coin at a relatively low price. Whale accumulation is considered a precursor of a rally in Shiba Inu based on previous trends in the last two months.

Most recently, on September 12, within a 24 hour period, one of Ethereum network’s largest whales scooped up 536.51 billion Shiba Inu tokens. The deep-pocketed Ethereum investor spent $7 million on the purchase, in 14 transactions. Based on data from Etherscan.io, the whale is known to scoop up Shiba Inu during a price dip in the meme coin. 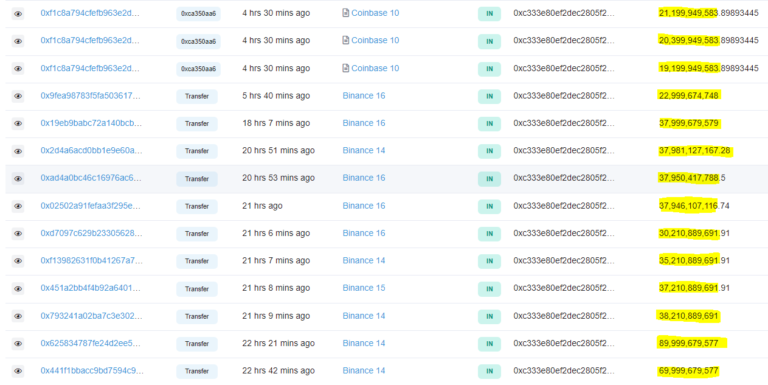 Data from Etherscan.io reveals that Ethereum’s largest investor has acquired SHIB from Binance and Coinbase, two large cryptocurrency exchanges. The first ten transactions accounted for 475 billion SHIB, the next few on Coinbase accounted for 60 billion. Post the accumulation, the whale sold a significant chunk of Shiba Inu holdings, 19.2 billion tokens worth $252,096 in a single transaction. The whale now holds 519.3 billion Shiba Inu worth $6.82 million in the wallet.

Why whale accumulation of SHIB matters?

Accumulation of Shiba Inu by large wallet investors on the Ethereum network is considered a bullish signal in the crypto community. A pattern has emerged wherein large scale purchases of SHIB by whales are followed by a rally in the meme coin. The local top coincides with the price at which whales shed their holdings.

Analysts at FXStreet identified how Shiba Inu price range has tightened and there is a possibility of a 50% rally in the meme coin. For more information and key price levels, check the video below: