Dogecoin was created in 2013 and started as a joke adapted from the Doge internet meme. The cryptocurrency gained popularity through social media platforms, which raised funds quickly, accelerating the production of DOGE. In less than two years following its launch, over 100 billion coins were in circulation.

Investors should note that cryptocurrency investments continue to be risky, as the volatility of prices are high, and the storage of digital assets could be tricky for some. Dogecoin remains susceptible to quick market movements, including Elon Musk’s support for DOGE, which pumped prices up by 32% following his tweet about the meme-based crypto asset in April 2021.

This article will take you through the simple steps of how to buy Dogecoin.

Where to buy Dogecoin

Investors that are interested in exploring how to buy Dogecoin can easily purchase and sell the digital currency on cryptocurrency exchanges. Users can choose to either store their dog-themed token on an exchange or in a DOGE wallet.

Popular exchanges that support Dogecoin trading include Binance, Coinbase, Gemini and Kraken. Other applications including Robinhood also support DOGE trading, but the platform does not allow users to transfer the cryptocurrency off of the brokerage. For those who are trading the meme-based digital currency on Robinhood, users must sell the assets and then repurchase them on an exchange to move them to a separate wallet.

How to sell Dogecoin

If you decide to keep your Dogecoin at the exchange, the process of selling your DOGE is quite simple. All you need to do is enter the amount of the coin you would like to sell, and your order will be processed accordingly.

Cryptocurrency exchanges also charge a fee for every transaction, so investors should note that the more sales of Dogecoin made could mean higher fees.

Billy Markus and Jackson Palmer created Dogecoin in December 2013 after Markus received inspiration from social media, which encouraged him to produce the digital token. Started as a joke-based cryptocurrency, Markus developed the codes based on Luckycoin, which was centred on Litecoin’s proof-of-work system.

How to mine Dogecoin

Dogecoin mining is a lot less competitive compared to mining Bitcoin, as new blocks are created much quicker. Rewards for mining the canine-themed cryptocurrency is also higher, around 10,000 DOGE compared to 6.25 Bitcoin.

Similar to the bellwether cryptocurrency, Dogecoin also uses the proof-of-work mechanism, which involves individuals or organizations competing to add new blocks to the blockchain by verifying transactions using mining equipment.

However, Dogecoin does not have a maximum supply cap, unlike other proof-of-work cryptocurrencies such as Bitcoin. The circulating supply of DOGE will continue to increase indefinitely as new coins are continuously being created.

While the world’s largest cryptocurrency by market capitalization uses a hashing algorithm known as SHA-256, Dogecoin and Litecoin use a less complex alternative called Scrypt. This allows for DOGE and LTC mining to be more efficient and less energy-intensive than Bitcoin.

Should I buy Dogecoin?

Dogecoin has risen to become one of the top ten cryptocurrencies by market capitalization, which has turned heads for many investors who have previously written the asset off as a complete joke. 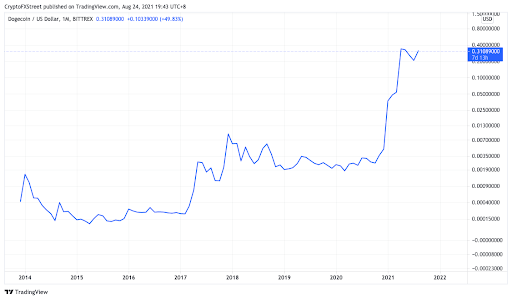 Dogecoin is one of the Best penny cryptocurrencies in 2021

DOGE was never intended to be an investment cryptocurrency, but its speed has made it more efficient for frequent transactions over Bitcoin.

In 2021, Dogecoin price has seen a considerable rise following the promotion from Tesla CEO Elon Musk, who revealed that he personally holds the meme-based digital currency along with Bitcoin and Ethereum.

Coined the “Dogecoin CEO,” Musk has been working with Dogecoin developers since 2019.

After reviewing this guide on how to buy Dogecoin, traders should conduct research prior to investing in DOGE and risks involved with the crypto asset. Experts recommend investing around 3% to 10% of a portfolio in digital currencies.