Cryptocurrencies saw a massive rally during the 2021 bull run. Altcoins, DeFi blue chips and even meme coins saw their value more than double in a few days to months. This expansion in their price is something that happens during every boom cycle.

Like stocks, Bitcoin price experiences periods of extreme expansion, known as boom cycles, followed by bust cycles. Altcoins typically grow during the boom phase and have a higher rate of return with an even higher risk.

Here are the top five penny cryptos to buy in 2021

Any cryptocurrencies other than BTC are generally lumped together under the “altcoin” moniker. However, these coins can be further classified into multiple categories like:

Before heading into the list of the best penny cryptocurrencies to invest in during 2021, let us look at what penny cryptos are and what investing in them entails.

The lowdown on penny cryptos

While the categorization of altcoins is complex depending on the classification aspect, penny cryptocurrencies are much easier to define. They are altcoins worth less than $1, irrespective of the sector they are trying to impact and the blockchain they are based on.

Apart from the price, penny cryptocurrencies can vary in a multitude of ways and can be tracked using risk factors, market capitalization and so on.

Altcoins are relatively riskier due to their volatile nature, but with penny cryptos, the risk increases exponentially due to three reasons: lack of information, liquidity and scams.

SushiSwap’s creator Chef Nomi came back to the space after debates and the intervention of FTX’s CEO Sam Bankman-Fried. For the record, Chef Nomi made it away with 38,000 ETH worth roughly $14 million at the time (worth $126 million now).

This is what the exit scam transaction looks like. 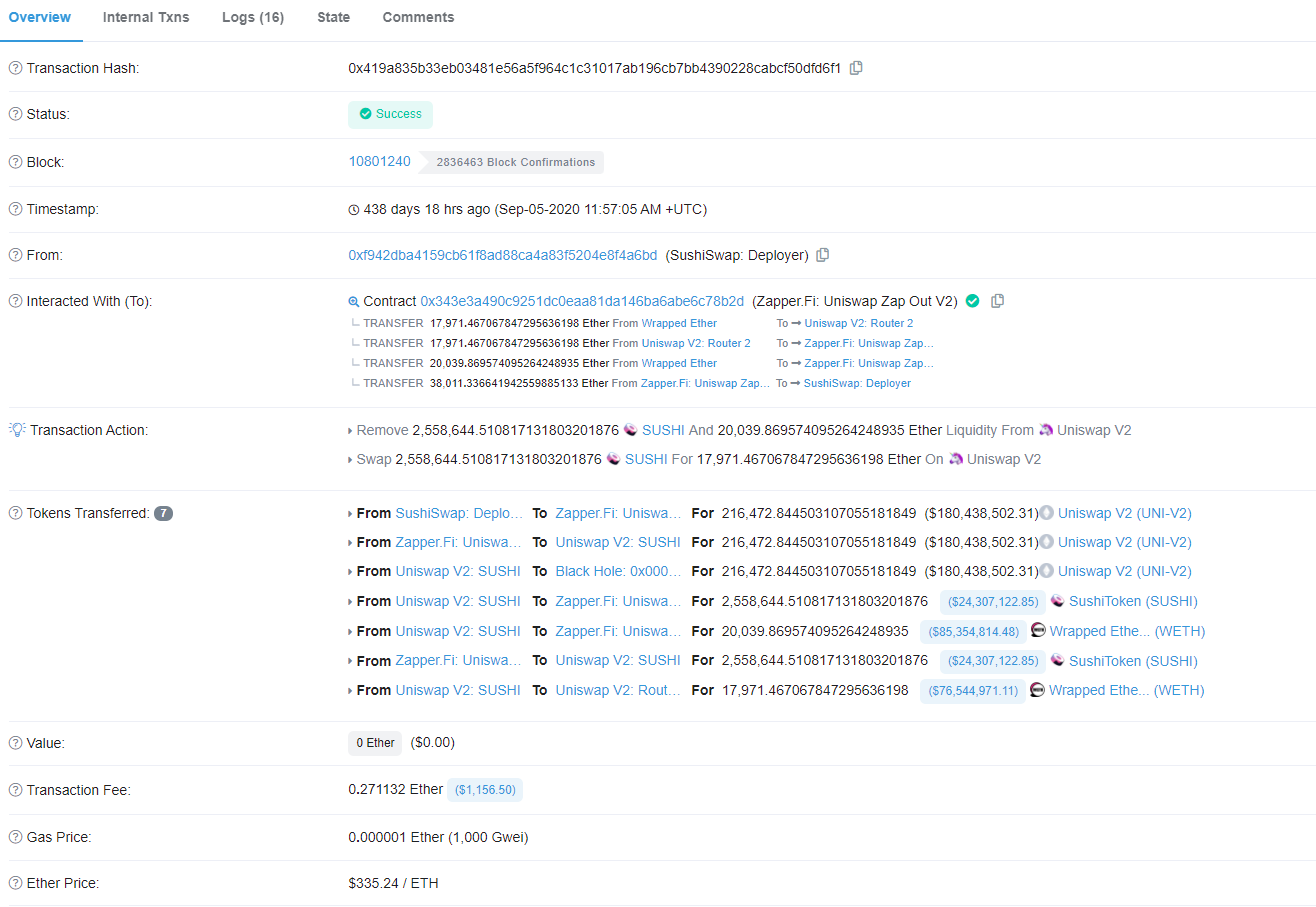 However, after six days, the creator returned the stolen 38,000 ETH.

To everyone. I fucked up. And I am sorry.

According to Cipher Trace’s reports DeFi rug pulls and scams accounted for 99% in the second half of 2020. This move from the scammers was oddly reminiscent of the 2017 ICO frauds.

Regardless, the total value locked in DeFI is around $85 billion, roughly around the same level as it was during the peak in May 2021. 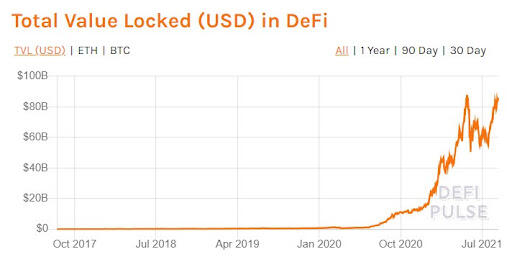 The astronomical difference in returns between penny cryptos vs. main cryptos can be seen in the chart below. Shiba Inu, a dog-themed meme coin, saw a 734,526% increase in its value from August 20, 2020, to its peak on August 10, 2021. Bitcoin, on the other hand, rallied roughly 515% during the same time.

Other penny cryptos saw returns up to 8,400%, which more than speaks for the rewards as compared to main cryptos like Bitcoin or Ethereum. 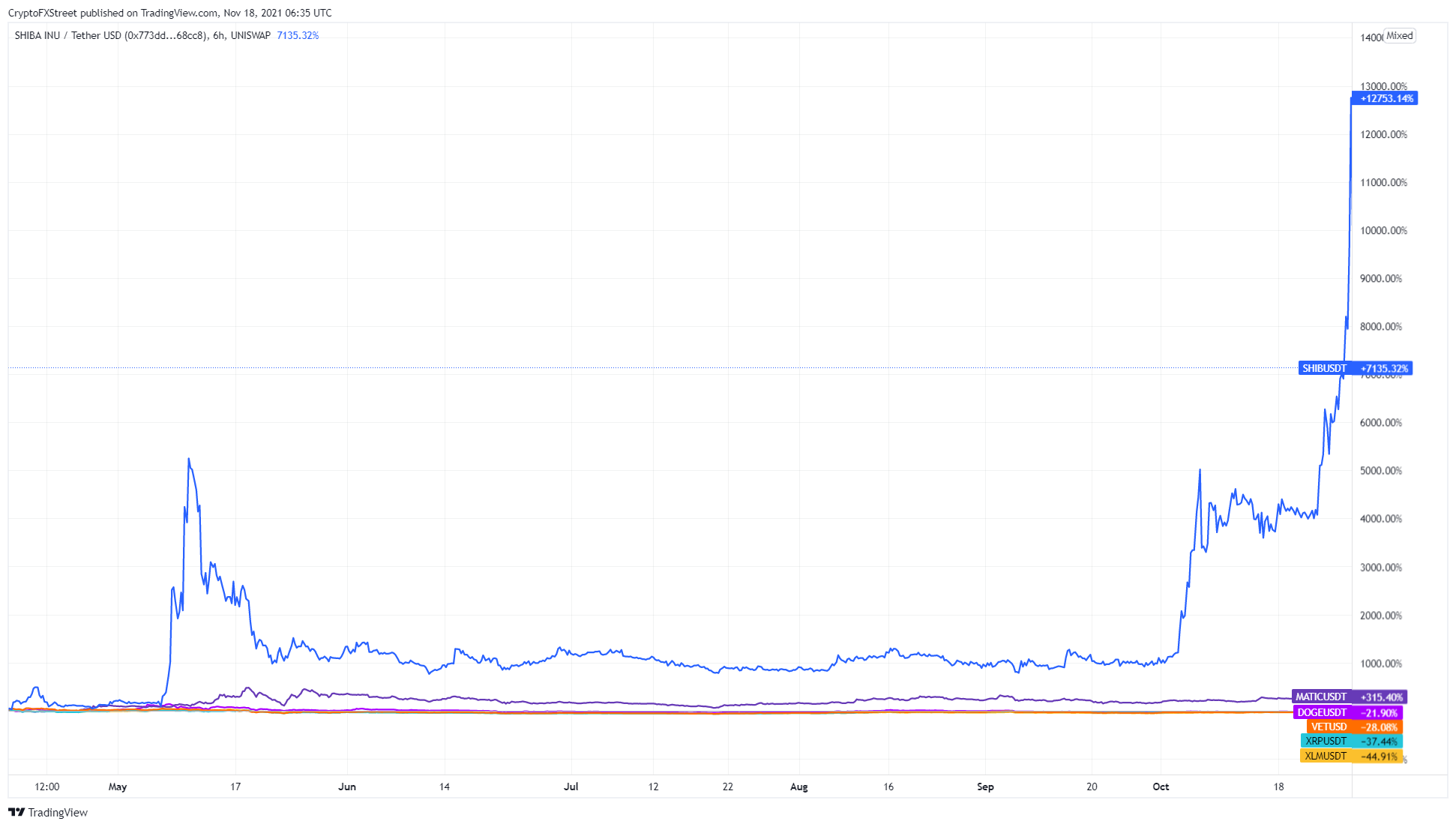 As Bitcoin price hovers around the $60,000 psychological level, things have taken an unexpected turn in the land of penny cryptocurrencies. Meme coins have stolen the spotlight from other altcoins. While ERC-20, BEP-20, DeFi tokens partook in the short-term uptrend, remittance tokens like XRP and XLM have not seen impressive gains. On the meme coin front, Shiba Inu, aka the so-called “Dogecoin killer,” has held up to its name as it rose a whopping 1,229% since September 1, while DOGE has seen a 24% return in the same period. With analysts predicting Bitcoin to hit $100,000 or more, the bull run seems to have just begun. Hence, the potential for this category of altcoins to flourish is massive. As more retail investors join the fray, the more explosive the uptrend for meme coins will be. Therefore, investors need to keep a close eye on penny cryptos to invest as 2021 comes to an end.

So, without further ado, here are the best penny cryptocurrencies in 2021 to invest in.

These coins were created for the sake of memes or jokes and usually do not have any utility. However, Shiba Inu seems to have taken the concept of meme coins one step further as it launched ShibaSwap DEX and has plans to further implement Shiba Inu Incubator, a platform to incubate holders and incentivize them, and Shiba Rescue, where the creators use ‘Amazon Smile’ to collect and donate a percentage of your Amazon purchases to the Shiba Inu Rescue Association.

Ripple was designed using proof-of-stake to create a better blockchain that is more efficient than Bitcoin with the capacity to handle real-world applications. Stellar Lumens follows a similar path but is in less of a dilemma than Ripple and has not run-ins with authorities.

The other five penny cryptos that did not make it into the list but are worth mentioning include: