Prices: Bitcoin and ether run in place, but other major cryptos, including SOL, rose significantly.

Insights: India has not been the friendliest place for crypto lately; BC Technology Group maintains high hopes.

Bitcoin and ether are flat

Bitcoin and ether spent another day running in place.

The two largest cryptos by market capitalization were roughly flat over the past 24 hours, bitcoin under $47,000, just below its frequent resting spot the past few days, and ether just under $3,400. It was the second consecutive day where prices of both moved little from where they stood the preceding day.

Most other major cryptos in the CoinDesk top 20 by market cap were in the green, a few significantly so. SOL and AVAX were up 7% and 5% at certainly points, respectively, and the meme token SHIB rose about 3%.

Fueled by war-related increases in fuel prices and worsening supply chain problems, inflation soared in Germany and Spain to highs not seen in both countries since the 1980s. Spain's consumer price index rose to nearly 10%, jumping by more than two percentage points since February. Germany took an initial step toward natural gas rationing, which about half the population uses for heating.

The price of Brent crude, a widely considered measure of the energy market, hovered over $110 on Wednesday after dipping below $105 earlier in the week.

Oanda Americas senior analyst Edward Moya said that after a week of gains "bitcoin's rally" was "taking a breather and that should remain the case as war concerns completely dominate the short-term fate for most risky assets."

India continues its crypto crackdown; BC Technology Group is Optimistic

As crypto goes, there are easier places to operate than India.

The country's tax authority announced on Monday that it had seized Rs. 95.86 crore (US$12.6 million) from 11 crypto exchanges on allegations of tax evasion.

CoinDesk had reported in January that the country's Directorate General of GST Intelligence (DGGI), which oversees tax collection, had previously seized around Rs. 84 crore (about $11 million) in taxes and 1.1 crore ($145,000) in penalties. India’s Minister of State for Finance Pankaj Chaudhary revised the amount to 95.86 crore ($12.6 million) in a statement.

The government said in January that it was investigating six exchanges, including India's largest exchanges, WazirX, CoinDCX and BuyUCoin, as part of an anti-tax evasion initiative, but Chaudhary updated the number.

The announcement comes a week after the government passed a finance bill that included a whopping 30% capital gains tax on crypto transactions and a 1% tax deducted at source (TDS) and no offsetting losses. The vote ignored lobbying by industry advocates who had hoped to water down at least the source tax.

On Friday, April 1, crypto companies must begin paying the capital gains tax, with T1% tax deducted at the source as of July 1.

Indian Prime Minister Narendra Modi’s government is still planning a rollout of a digital rupee by the end of 2022-23, seen as the cornerstone of the country's crypto policy. That approach is more cautious and in keeping with the Indian government's recent authoritarian leanings. 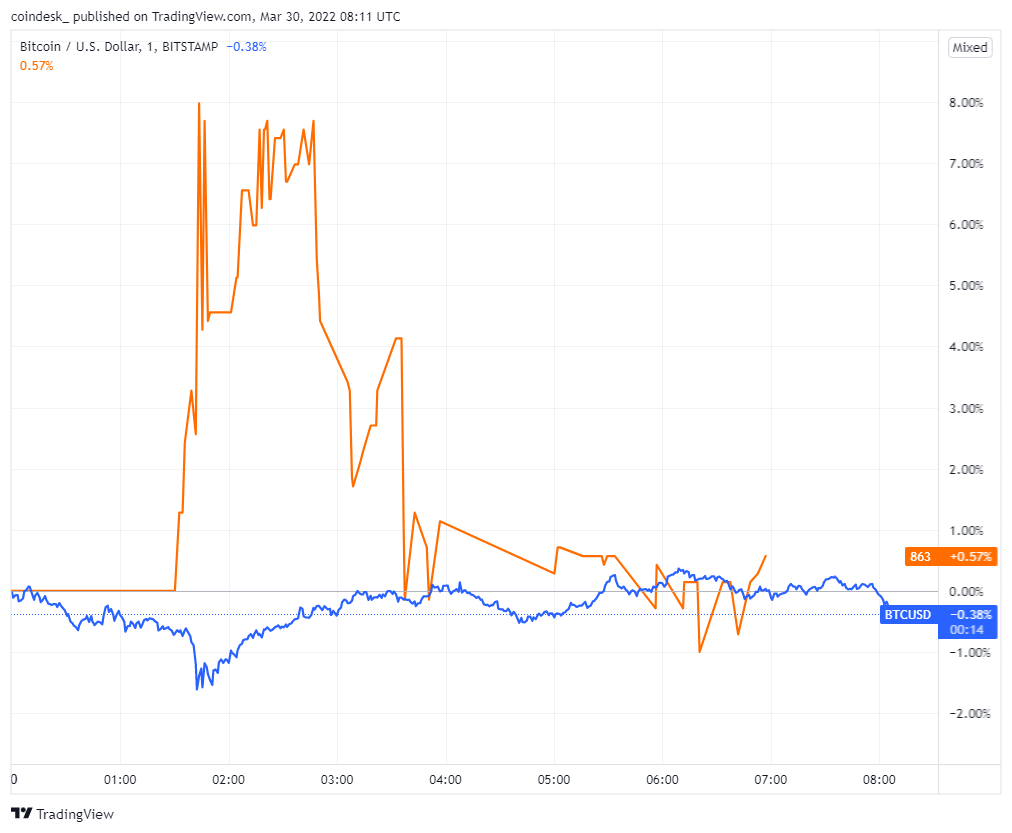 During a Wednesday morning earnings call, company executives emphasized they still believe a regulated pool of capital provides the biggest opportunity in crypto because there remains a huge market of institutional traders that can’t yet touch anything not regulated.

“DeFi is amazing, but it’s hard for a regulated firm to trade in the DeFi market because of the lack of [anti-money laundering] controls,” he said.

But while the regulatory regime might inhibit some forms of market trading, it also opens up new opportunities. Regulated coin lending, for instance, is something that Coinbase (COIN) has struggled to navigate but regulators in Hong Kong have no problem with it – provided it stays within the closed regulatory loop of other professional investors.

The executive team also mentioned that although OSL is a regulated exchange closed to retail traders, the company does have retail exposure via DBS’s digital assets exchange, which runs on OSL’s software. During its last earnings, DBS said that it is planning to launch a retail exchange by year’s end.

Over the next six months (companies in Hong Kong report earnings bi-annually), all eyes will be on the stock of OSL’s parent company to see if investors are valuing its efforts.

The company is growing significantly by the numbers, and its stock has made some progress in small increments. But on the week it still underperforms bitcoin.

The gap narrowed on Wednesday, at least compared to a month ago, but it still exists. Six months later we’ll see if the market vindicates the company’s regulated-first approach.

Bitcoin (BTC) is attempting to break above a tight trading range between $46,000 and $48,000 as momentum remains positive.

Initial resistance is seen at the 200-day moving average, currently at $48,312, which could stall the price rally. Still, there is stronger resistance at $50,966, suggesting that buyers could remain active over the short term.

The relative strength index (RSI) on the daily chart ticked higher and is firmly in the overbought zone. Previous overbought signals, however, lasted for three months before a significant sell-off in price.

ETHDubai: Event for developers and other connected or interested in Ethereum.