Ethereum price showed an excellent bullish outlook as it rallied from the range low to retest a resistance level just below the range high. While this upswing was stellar, it might be coming to an end as the Momentum Reversal Indicator (MRI) flashed a sell signal.

Perhaps the most promising development in the Ethereum ecosystem is the shift from Proof-of-Work (PoW) to Proof-of-Stake (PoS). The staking of ETH, in particular, has garnered attention from investors, who are staking roughly 50% of their holdings, according to BitStamp exchange’s CEO Julian Sawyer.

The ETH 2.0 contract has seen 6.48 million ETH worth $17 billion deposited to it at the time of writing.

Speaking of the interest seen by BitStamp for ETH staking, the CEO stated,

That says a lot. That is not people playing [and saying] 'Oh, I'll just put 1%, 10% over there, I'll put a hundred dollars into this.' That is people being engaged in the product set and the interest rate.

The ETH 2.0 contract’s collection shows the interest among users for the upcoming London Hardfork. This upgrade is significant since it proposes two critical improvements to the existing blockchain network.

The change in the underlying nature of how Ethereum works is crucial since ETH 2.0 will not require energy-intensive mining equipment. However, a major reason this change was promoted was to improve the scalability of the Ethereum blockchain and increase the efficiency of transactions.

However, by implementing the Ethereum Improvement Proposal (EIP)-1559, the arbitrary nature of gas will be eliminated. According to EIP-1559, the gas fees will be split, and a part of the fees will be burned, effectively reducing the total fees received by the miners.

While this controversial fee structure created a chasm between the developers, users and miners, things seem to have cooled off as the proposal approaches.

Concerns on the hard fork’s schedule

Although the fundamental nature of this upgrade is bullish, there have been plenty of delays from shifting to ETH 2.0. Therefore, the audience is concerned about the upcoming London hard fork, which went live on the Ropsten test network on July 21. However, since its first debut in 2019, things have not gone according to the core developers’ plans.

From pushbacks to delays, this proposal has caused the mining community to oppose it, leaving the Ethereum network open to a 51% attack.

Speaking during a conference in June 2021, Vitalik Buterin stated that the biggest roadblock in the shift from ETH to ETH 2.0 was people-related problems and not technical issues. This statement by the creator of ETH refers to the internal conflicts that have been ongoing for several years.

Despite the launch on the testnet, the hard fork faced a chain split, causing an invalid transaction to be mined into the blockchain. Although the bug was addressed immediately, there is no telling how things might change after the implementation on the mainnet on August 4.

Ethereum price rallied roughly 58% from the range low at $1,700 to nearly $2,700 in under two weeks. This massive upswing was a result of Ether’s correlation with Bitcoin. While this run-up was optimistic, bulls might have to take a backseat as the Momentum Reversal Indicator (MRI) flashed a sell signal in the form of a red ‘one’ candlestick on the 12-hour chart.

This technical formation forecasts a one-to-four candlestick correction for ETH.

A retracement to $2,174 would indicate a 17% pullback from $2,640. This move would exhaust the selling pressure from investors willing to book profit and provide an opportunity for sidelined investors to hop on the next leg up that propels Ethereum price 33% higher to tag the range high at $2,895. 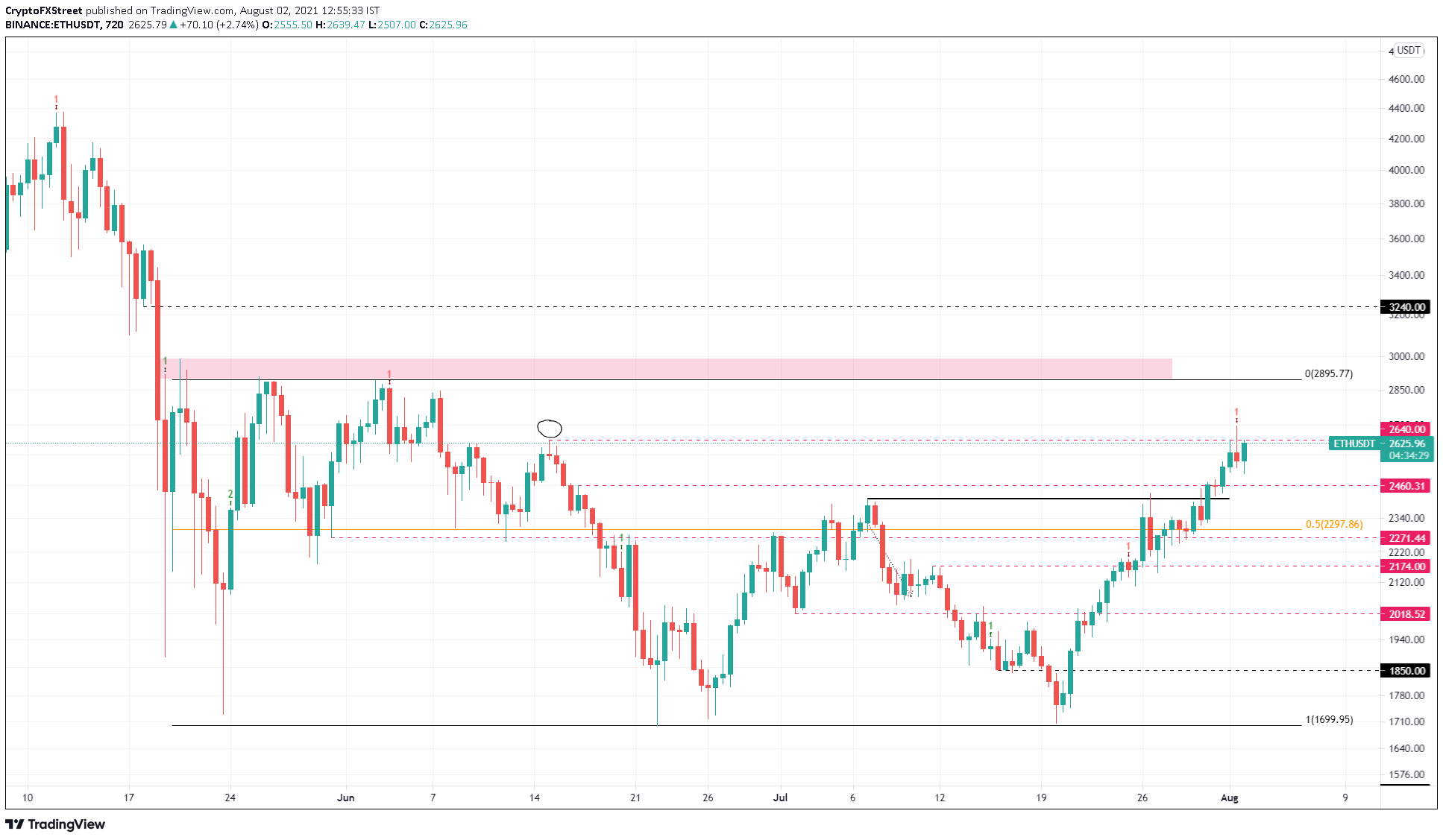 Supporting this pullback scenario is the 365-day Market Value to Realized Value (MVRV) model, which has risen from 0% to 37% in under two weeks. This uptick indicates that 37% of the investors who purchased ETH over the past year are in profit.

Investors might be willing to book profit after this run-up, leading to a pullback.

However, adding a tailwind to the overall bullish nature of Ethereum is the supply of ETH on exchanges. This metric shows that despite the recent exponential growth, 520,000 ETH left centralized entities, suggesting that investors are optimistic about Ether’s price performance over the short-term future.

While the pullback followed by a new leg-up seems plausible, investors need to note that a decisive 12-hour candlestick close above $2,640 will indicate a resurgence of buyers, which might lead to a premature restart of a new upswing.

However, a breach of the $2,018 support level will reveal weakness among buyers and will invalidate the bullish thesis. Such a move might even lead to cascading selling pressure that pushes Ethereum price down to the demand barrier at $1,850 or, in a highly bearish case, the range low at $1,700.