The imminent IPO of cryptocurrency giants Coinbase may be regarded by some as ‘the hottest IPO of 2021,’ but its arrival may be significant for galvanizing a crypto market that’s recovering from a jittery start to spring.

Coinbase operates as the largest cryptocurrency exchange in the US and is currently preparing for an Initial Public Offering. With talk of a valuation in excess of $100 billion, it appears likely that this IPO will be among the biggest of 2021.

The move is likely to play a role in pushing cryptocurrencies like Bitcoin and Ethereum further towards mainstream adoption just a few months on from PayPal adopting crypto onto its payments platform.

But after an end to February that saw BTC shed 25% of its value, could Coinbase going public play a significant role in preventing more bearish patterns from taking place and instead give investors more cause for optimism in digital finance?

Building a $100 Billion Company in Under a Decade

Coinbase began in 2012 when former Airbnb engineer, Brian Armstrong, and Goldman Sachs trader, Fred Ehrsam joined forces to establish an exchange that would make investing and trading in cryptocurrencies more straightforward and fair.

Armstrong and Ehrsam’s idea proved to be inspired, and today the platform has over 43 million retail users and 7,000 institutional clients. There are also 115,000 partners based in over 100 countries worldwide. 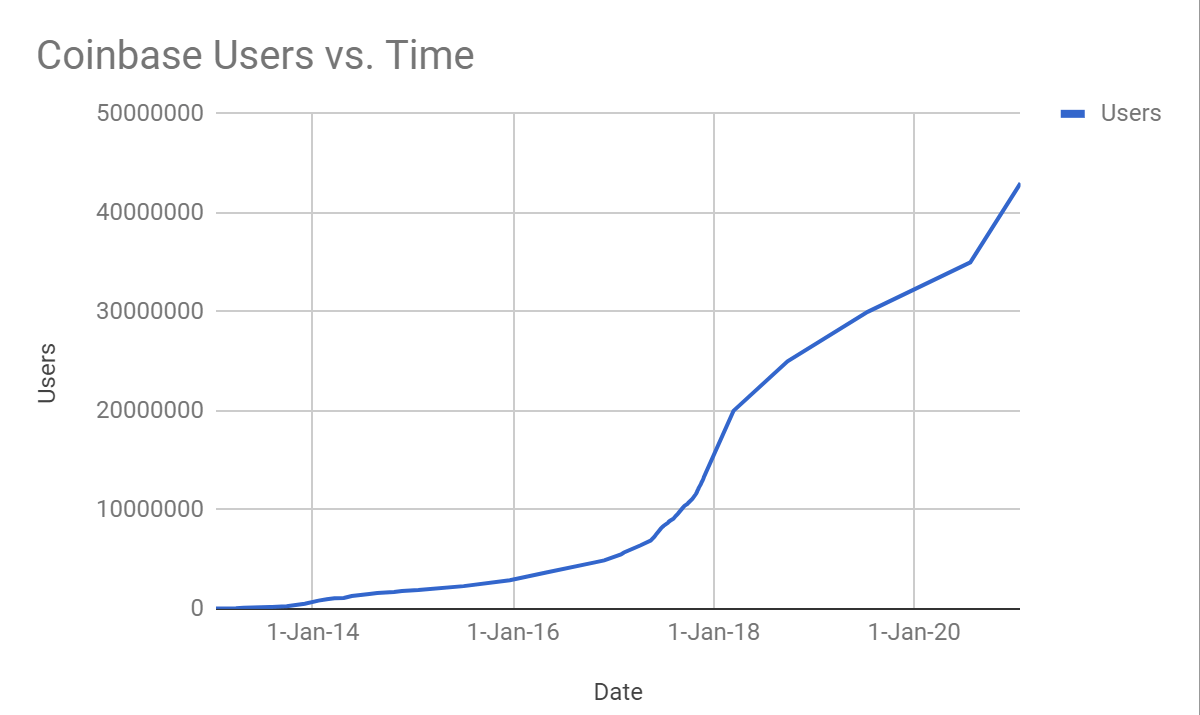 While the growth of Coinbase has been somewhat more erratic due to the volatility of the cryptocurrency market, for 2020 the platform’s revenues more than doubled to $1.3 billion and profits came to some $322 million. Furthermore, the assets under custody equate to around $90 million at the time of writing.

Paving The Way to Mainstream Adoption

The imminent Coinbase IPO will come at a time when the cryptocurrency market has been buoyed by the sustained support of PayPal, along with significant levels of investment from both Tesla and MicroStrategy.

Today, Bitcoin is enjoying a resurgence in popularity following meteoric price rises between December 2020 and February 2021. However, as we head into spring, market liquidity has begun to fall - indicating a rise in volatility for the world’s most famous digital currency in the short term.

In the Google Trends chart above, we can also see that - even in an age where Bitcoin has smashed its old all-time high from 2017, the cryptocurrency is still struggling to generate the same levels of interest as four years ago.

However, as Coinbase prepares to go public, we may be about to see a greater level of legitimacy added to the world of cryptocurrencies.

Stephen McKeon, a finance professor at the University of Oregon and a partner at Collab+Currency acknowledged the ramifications of Coinbase entering the market as a move that will reverberate across the world of crypto. “Coinbase will represent the first crypto-native corporation to be listed on a major U.S. stock exchange,” McKeon explained to CoinTelegraph. “It will be a significant event for the industry,” he added.

It’s also important to be aware of the amount of money that Coinbase holds in its custodial accounts. The total value of crypto assets grew 200% from $1.2 billion to $3.76 billion in the space of twelve months and is supported, in no small part, by growth in decentralized finance (DeFi). DeFi represents a range of financial applications that are built on top of Ethereum and often take the form of smart contracts protected by blockchain technology. Not only is Coinbase an exchange that facilitates money flowing into the DeFi market, but it also offers users ways to benefit directly from the growth of DeFi, too.

Significantly, it’s possible for investors to profit from DeFi simply by holding DAI tokens, which dishes out DAI Daily Savings rates that are calculated and paid out daily. Maker, the governance token for the system, is currently the largest DeFi network by market and worth about 16% of the entirety of the market.

As we can see, around $40 billion dollars are currently invested in DeFi - a huge increase on the state of play during the early months of 2020. Furthermore, these figures don’t take into count the $6 billion locked into the Ethereum 2.0 Beacon Contract either.

The mind-boggling sums invested in decentralized finance must be taken seriously when it comes to considering the growth potential of Coinbase. DeFi has the potential to use blockchain to provide sophisticated digital financial services that extend way beyond the simple crypto-asset investment strategies of today - and Coinbase is an exchange that’s moved quickly to accommodate this extremely high-potential market.

Transferring From Crypto to IPO Investing

The imminent arrival of a Coinbase IPO may be a tempting proposition for cryptocurrency investors to try their hand at more traditional stocks and shares markets.

The most straightforward way of investing in an IPO is to go to the company directly. However, cases of Initial Public Offerings to individual investors is something of a rarity today when it comes to investing - largely because companies prefer to deal with institutional clients in order to sell large volumes of shares in a single transaction.

In contrast, selling to the general public can involve sporadic investments on a much smaller scale which results in costing the company more than it would by simply dealing directly with the institutional arena.

Alternatively, more traditional companies like Fidelity also offer participation, but with a higher threshold of either $100,000 or $500,000 in household assets - depending on the IPO itself.

However, there’s yet no official date of when the Coinbase’s IPO will take place.

Capitalizing on a Symbiotic Relationship With Bitcoin

Despite heavily representing the DeFi market, Coinbase’s revenue largely comes from just two of its assets - Bitcoin and Ethereum. For 2020, BTC and ETH represented 70% and 13% of assets on the platform respectively. The filing itself acknowledges that “If demand for these crypto-assets declines and is not replaced by new demand for crypto assets, our business, operating results, and financial condition could be adversely affected.”

Despite institutional interest continually rising around Bitcoin, the cryptocurrency has suffered an uncertain start to a springtime that’s been punctuated by some losses in trading volume. It may just be that a positive Coinbase IPO could provide a catalyst for more mainstream crypto acceptance that kicks BTC out of its bearish slumber while generating a strong enough rally to see Coinbase hit the ground running when it hits the market.

The listing of Coinbase provides the trading platform, and wider cryptocurrency industry, with its first taste of Wall Street recognition in a landscape that’s still in its early stages of development. Provided that there are no troublesome regulator disruptions on the horizon, a Nasdaq listing may be the blessing that both Coinbase and Bitcoin alike have been looking for.