It's been a momentous week for Bitcoin. The pioneer cryptocurrency broke above psychological $20,000 and hit a new all-time high at $23,770. Since the beginning of October, the coin's value more than doubled; those who were wise enough to buy some BTC in the middle of March got away with 500% returns on their investments.

At the time of writing, BTC is changing hands at $22,600. The coin's market capitalization jumped to $430 billion, which is over 65% of the whole cryptocurrency market value.

A new generation of whales is coming

Bitcoin made several approaches to $20,000 and finally smashed it amid substantial market volume. The fundamental reasons for the growth remained the same for a while: inflationary pressure, low-interest environment, growing institutional interest – the catalysts for the breakup. However, a massive flow of evidence that Bitcoin is swiftly turning into a mainstream asset created a new wave of demand and pushed the price above the critical level.

As FXStreet previously reported, a combination of at least four significant events served as a pre-condition for a rally ahead of Christmas. One of them is another whale ready to flow into Bitcoin's waterway. Eric Peters, the head of One River Asset Management, confirmed that the company purchased BTC worth $650 million and was planning to extend the exposure to $1 billion within the next months. The news triggered a massive bull's race on the market as traders and investors anticipated a massive spike fo demand.

What is different this time

The rally looks suspiciously similar to the experience of 2017 when the market craze that drove BTC to $20,000 before Christmas. The holiday season was dominated by talks about the digital future and a transition to cryptocurrencies. However, the rally ended in a devastating sell-off and a year-long crypto winter. Bitcoin lost nearly 70% of its value, while some major altcoins went down by more than 90%.

This time around, the market is driven by the financial establishment that throws in large sums of money and ready to support the market if it starts rolling down. The retail crowd that engineered the previous boom could not provide a backstop or reversing the trend. Now we have MicroStrategy, PayPal, Square, and One River Asset Management, among others, to back the market.

Bitcoin is now regarded as a store of value and a go-to asset in hard times that can become a global reserve asset that will dethrone devaluing U.S. dollars. The greenback and the precious metal underperformed Bitcoin in 2020 as investors increasingly opted for the digital currency as a hedge against economic risks.

According to Dave Weisberger, the co-founder of and CEO of CoinRoutes, a U.S. cryptocurrency software firm, investors buy Bitcoin in hopes that someday it would be the equivalent of gold. And this is something that may become a self-sustained prophecy.

Bitcoin is in a long-term bull trend, and this time everything may be different; that's all fine. However, the correction will happen anyway. And that's something to be prepared for.

TD Sequential indicator has a sell signal in the form of a green nine candlestick on a monthly chart, increasing the risk of the bearish move for one to four candlesticks. As FXStreet previously reported, 20-30% corrections are a norm for a long-term bullish trend in the cryptocurrency market.

From the technical point of view, BTC may safely retreat to the $13,000-12,000 area and retain the long-term upside trajectory.  Even the sell-off towards $7,500 won't be a catastrophe as the monthly EMA50 protects this support area.

On the upside, we are mostly in uncharted territory, as there are no clear resistance barriers above the current price. As BTC stays close to its all-time high, mostly all BTC holders are in the money and likely to protect their profits. According to IntoTheBlock's "In/Out of the Money Around Price," over 440,000 addresses purchased over 400,000 BTC between the current price and $22,500.  This barrier may slow down the correction; however, if it is broken, the sell-off may be extended towards $19,500. 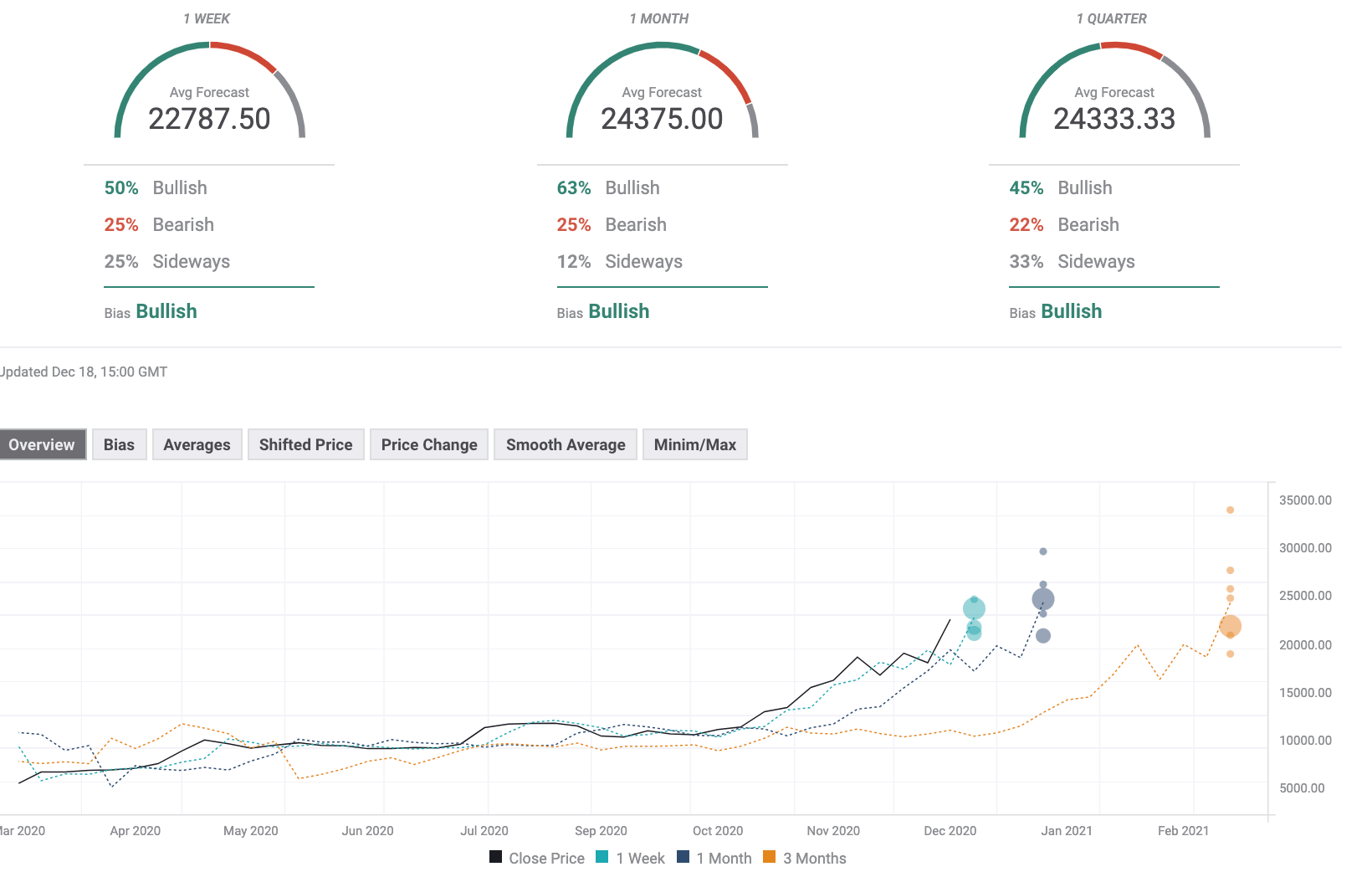 Bitcoin Forecast Poll of experts improved significantly from the previous week as the expectations on all timeframe turned bullish, with more than half of the respondents expecting the positive price momentum. Notably, the price predictions increased from the previous week. The participants bet on Bitcoin's growth above $24,000 on a monthly and quarterly basis.