However, the crypto markets seem to be enjoying the bullish narrative painted due to the upcoming Merge upgrade to the Ethereum blockchain. As a result, many altcoins have more than doubled over the last month and show signs that more is on its way.

If Bitcoin price does undergo a sell-off, this could potentially ruin the party for many of such altcoins, including Ethereum.

Bitcoin price holds steady, but for how long?

Bitcoin price has stuck to consolidating inside the ascending parallel channel fractal with no signs of a breakout. Things have remained more or less the same since the last weekly forecast but with one key addition - BTC tried shattering the 50% retracement level at $24,948 but failed.

The big crypto seems to be getting an overwhelming amount of buying pressure due to the 200-week Simple Moving Average (SMA) and the 30-day Exponential Moving Average (EMA) support cluster at $22,900.

Moreover, the Relative Strength Index (RSI) also shows a massive support area between 47 and 51, which explains why BTC price experienced a sudden spike in buying pressure on August 4.

This is the second failed attempt to flip the $25,000 hurdle into a support floor. Further adding credence to the increase in bears’ dominance is the August 12 daily candlestick close, which suggests that the buyers were overwhelmed by the sellers.

To make things worse, Bitcoin price produced a higher high on July 28 and August 11, while the RSI produced a lower low, suggesting the development of a bearish divergence.

In conclusion, the bigger picture for BTC shows us two potential scenarios that could evolve 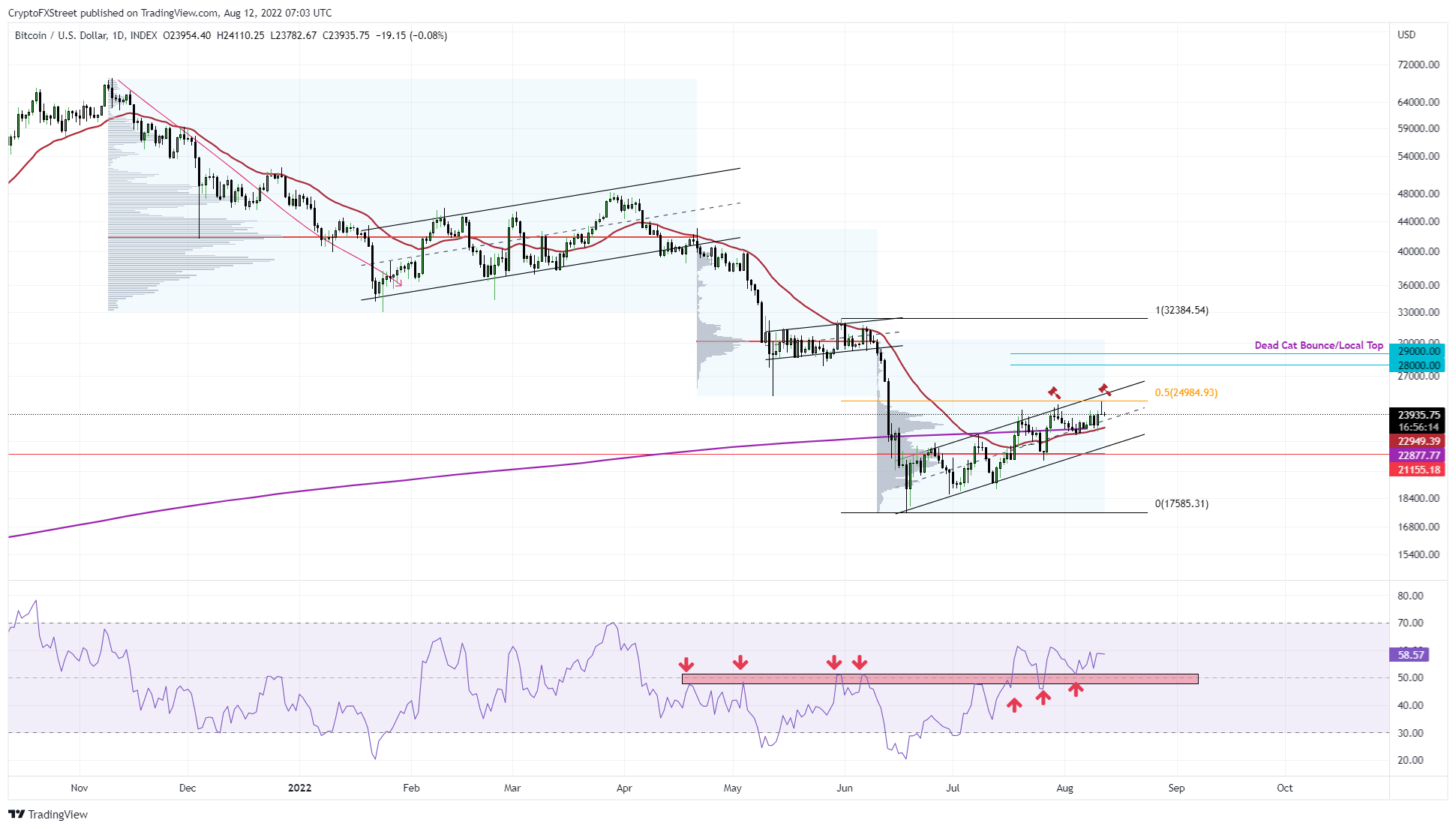 Let’s take a closer look at Bitcoin price from a lower time frame and discuss if we can get a clue for one of the aforementioned narratives. 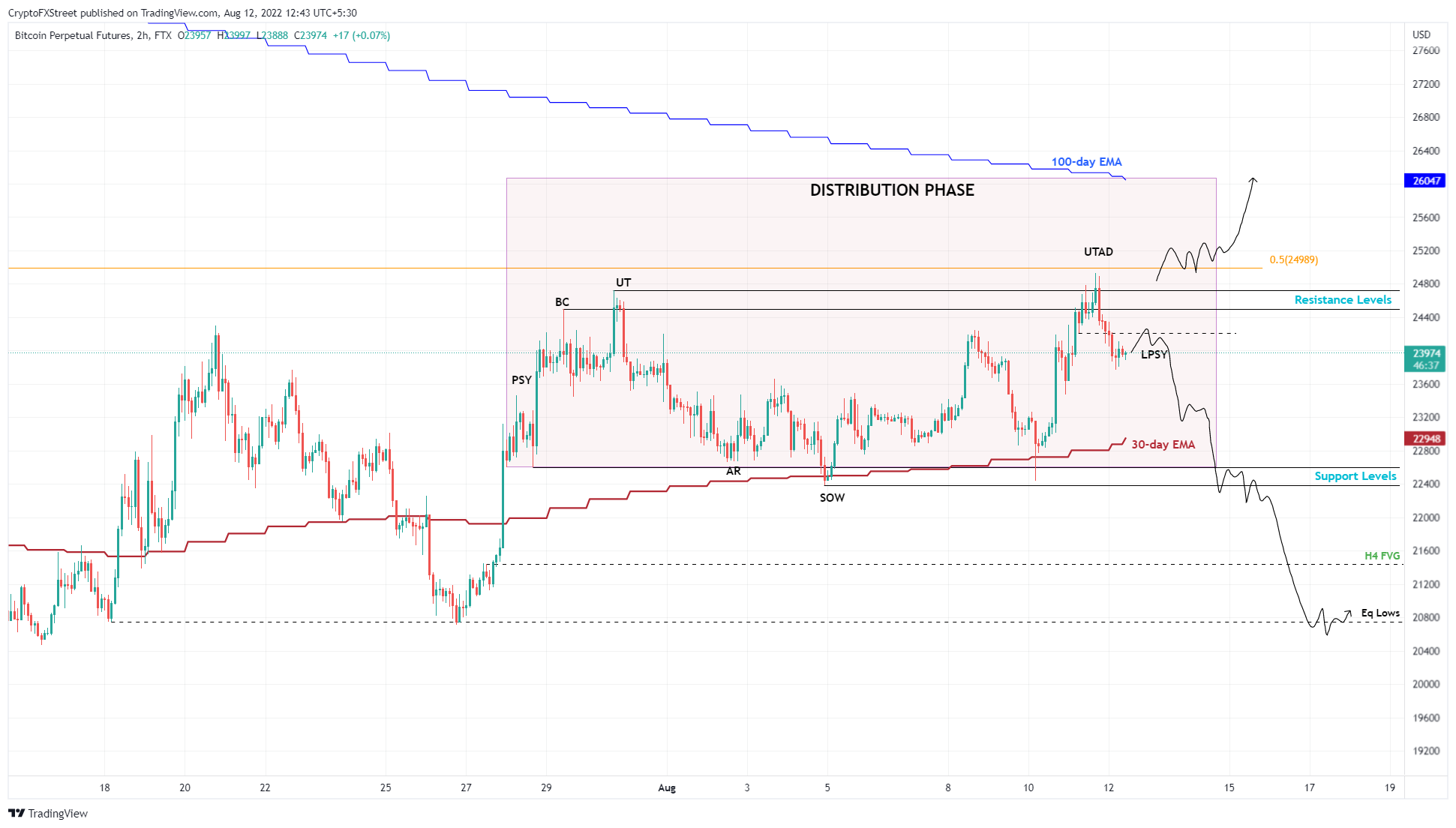 After a massive rally, the asset, aka BTC, forms a primary supply level (PSY), which in the chart above is seen occuring on July 28. There then follows a minor uptrend that indicates the climax of buying pressure (BC). As the bullish momentum ceases, Bitcoin price slides lower, which is termed an automatic reaction (AR), which in the chart above ends around August 2.

This downswing is followed by an upthrust (UT) and a sweep of the AR, giving rise to the first sign of weakness (SOW). However, the distribution’s last leg, where traders could enter a long position, would be a sweep of the UT that produces upthrust after distribution (UTAD).

After this move, the asset starts to slowly decline and the sell-off increases as it fails to hold above the AR.

Bitcoin price is currently at an opportune moment for sellers and is likely to start its leg down after producing UTAD  at $24,722. Interestingly, the 50% retracement level mentioned in the above section at $24,989 is a major hurdle, hence a rejection here makes perfect sense and adds credence to the distribution thesis.

A further bearish outlook will evolve for Bitcoin price should close the weekly candlestick below the point of control at $21,155. In this case, a breakdown of the ascending parallel channel will have occurred, which would hint at a much more drastic sell-off for BTC.

However, investors should not get ahead of themselves and look for a sweep of the range low at $17,585 to stabilize the sell-off and reevaluate.