Bitcoin price was in a sweet spot as it seemingly bounced off a crucial inclined trend line. However, as the selling pressure increased, BTC sliced through the said barrier and dropped lower. While things seem to be cooling off, directional bias is still unconfirmed for the big crypto.

According to a local news agency, Kyrgyzstan’s State Service for Regulation has developed a draft of regulations for crypto exchanges on August 25. The proposed draft aims to legalize crypto exchange operations. It also hopes to reduce risk by introducing frameworks that could help develop a digital economy in Kyrgyzstan by leveraging blockchain technology.

On the note of adoption, Holly Kim, a Lake County treasurer in Illinois, is reportedly accepting crypto donations for her reelection campaign, making her the first political candidate in the state to do so.

The candidate, who is up for reelection, plans to accept Bitcoin (BTC), Dogecoin (DOGE), Ethereum (ETH) and Dai (DAI).

Additionally, the institutions seem to be getting cozy with the second leg of the 2021 bull run, as MicroStrategy announced the addition of 3,907 BTC to its treasury.

Based on the 8-K filing with the Securities & Exchange Commission (SEC), the company purchased 3,907 BTC at an average price of $45,294, pushing its total holdings to 108,991 BTC worth roughly $5.2 billion at the current exchange rate.

In a recent interview, Kraken, a US-based crypto exchange, announced that it is expanding to European markets in 2021. The company is working with the local authorities to receive a license that targets multiple local jurisdictions.

While the exchange is already operating in 190 jurisdictions, this move could be to capitalize on the second phase of the 2021 bull run.

Bitcoin price began its uptrend after dipping below the $30,000 barrier on July 20. Since then, BTC rose roughly 72%, as it pierced the $50,000 psychological level briefly. On its way up, the big crypto respected the inclining trend line perfectly.

However, on August 26, BTC price sliced below this trend line and dropped roughly 6.3%. This move has now pushed the pioneer cryptocurrency in an open space with a demand zone ranging from $44,705 to $46,031.

While the overall trend remains bullish and unchanged, investors need to note that a breach below $44,705 will put the bulls in a tough spot. If the buying pressure increases on the retest of the said support area, however, BTC will likely head to $49,000 and even attempt to retest $50,000.

A decisive daily candlestick close above $51,500 will confirm the start of a new uptrend and propel BTC to roughly $57,000. 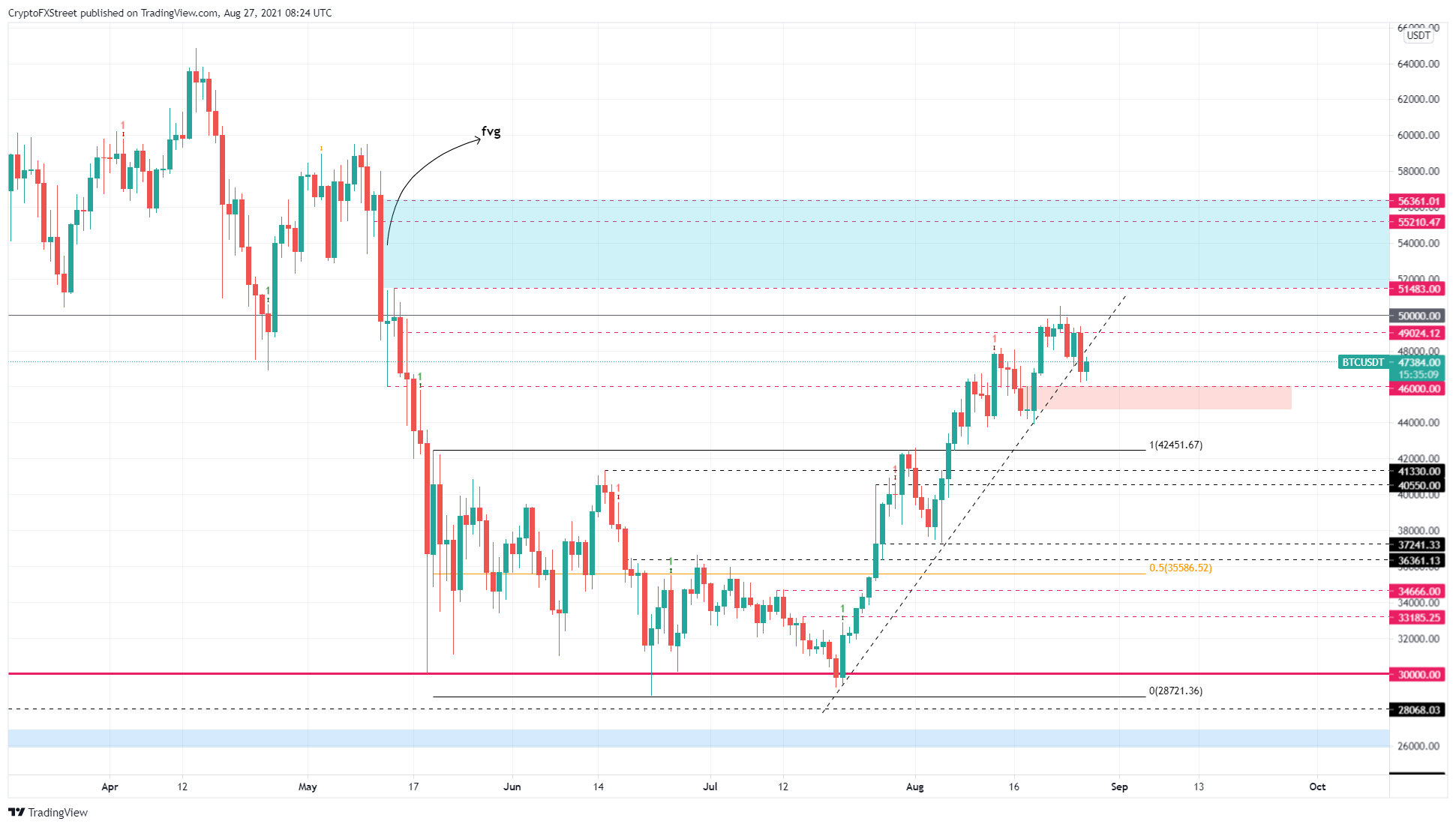 Supporting a bullish outlook is the Bitcoin supply shock chart, which shows a recent uptick in the exchange supply and the liquid supply.

In the last 3 days we’ve seen new buying coming in to absorb coins. We can see this in the Supply Shock chart below, switching towards the demand side. There was also passive buying in the order flow seen on exchanges. This has contained the downside risk in price action.

Furthermore, August 26 saw a massive outflow of 2,046 BTC from miners’ wallets. This was the single largest hourly transfer since June 4. The outflow indicates that the backbone of the Bitcoin network, miners, are bullish about BTC price performance.

Furthermore, stablecoins on all exchanges have hit a new all-time high at $19.22 billion. This metric tracks the number of stablecoins held on known exchange wallets and can be interpreted as a potential buying power resting on centralized entities, which can be seen as a bullish sign.

Additionally, painting a bullish outlook is the 30-day Market Value to Realized Value (MVRV) model, hovering at 4.8%. This fundamental indicator tracks the average profit/loss of investors that purchased BTC over the past month.

A lower MVRV value indicates that the investors have booked profit and that the short-term outlook remains bullish and free from unexpected sell-offs.

While things do not seem so bad for Bitcoin price in the short-term, it could get worse since the supply of BTC held on exchanges has increased from 2.46 million to 2.48 million since August 25.

This 20,000 BTC inflow could further cause a crash if investors decide to cash in their profits.

If the demand zone ranging from $44,705 to $46,031 breaks down due to an unforeseen spike in selling pressure, it will invalidate the bullish thesis. In some cases, BTC might crash 5% to retest the $42,000 support level or lower.