Bitcoin price ended its downtrend as it bottomed on June 8, indicating that a reversal was due. Coincidentally, a bill passed to make BTC a legal tender in El Salvador on June 9. This was a historic win for the flagship cryptocurrency, which has come a long way.

Following the move, the President of El Salvador, Nayib Bukel, announced plans to build a Bitcoin mining hub that runs on 100% clean energy derived from volcanoes.

Our engineers just informed me that they dug a new well, that will provide approximately 95MW of 100% clean, 0 emissions geothermal energy from our volcanos

Starting to design a full #Bitcoin mining hub around it.

What you see coming out of the well is pure water vapor pic.twitter.com/SVph4BEW1L

While Bitcoin enthusiasts were enjoying the victory, China was tightening the noose around Bitcoin miners’ necks as there were reports that Qinghai Province issued a document that calls for a ban on mining cryptocurrencies.

Speaking on the current state of miners in China, Kyle Davies of Three Arrows Capital stated on the UpOnly podcast,

They (Chinese crypto enthusiasts) are way more bearish than all of us; it’s off the charts, especially miners. They are physically moving out of China and setting up mines in other locations.

Due to the alleged energy shortage and strict restrictions on mining, the BTC hash rate has dropped by more than 20% since June 8.

While these two developments were a major highlight of the week, US senator Elizabeth Warren attacked Bitcoin and other cryptocurrencies over the much-debated energy usage.

What’s happening right now with cryptocurrencies, like Bitcoin and Dogecoin, it’s a wild west out there. And it makes it not a good way to buy and sell things and not a good investment and an environmental disaster. So, do we need some regulation around this? You bet we do.

Regarding the ransomware attacks, Warren added,

Every hack that is successfully paid off with a cryptocurrency becomes an advertisement for more hackers to try more cyber attacks.

Despite the concerns expressed by regulatory authorities, cryptocurrency adoption appears to be rising. Interactive Brokers’ (IB) chairman and CEO Thomas Peterffy stated recently that its customers were asking for cryptocurrency offerings. Although unclear on which cryptocurrencies IB will offer, the CEO noted it would do so by the end of summer this year.

The likely course of action for BTC would be a minor retracement to the swing low at $34,800 set up on June 5, followed by a continuation of the upswing. Considering the consolidation taking place at $36,774, it could kick-start an uptrend in BTC price.

Investors should note that $42,451 is the resistance level created by the left shoulder of a long-term head-and-shoulders pattern on a daily time frame. Therefore, it is likely Bitcoin price will face stiff resistance at this level. 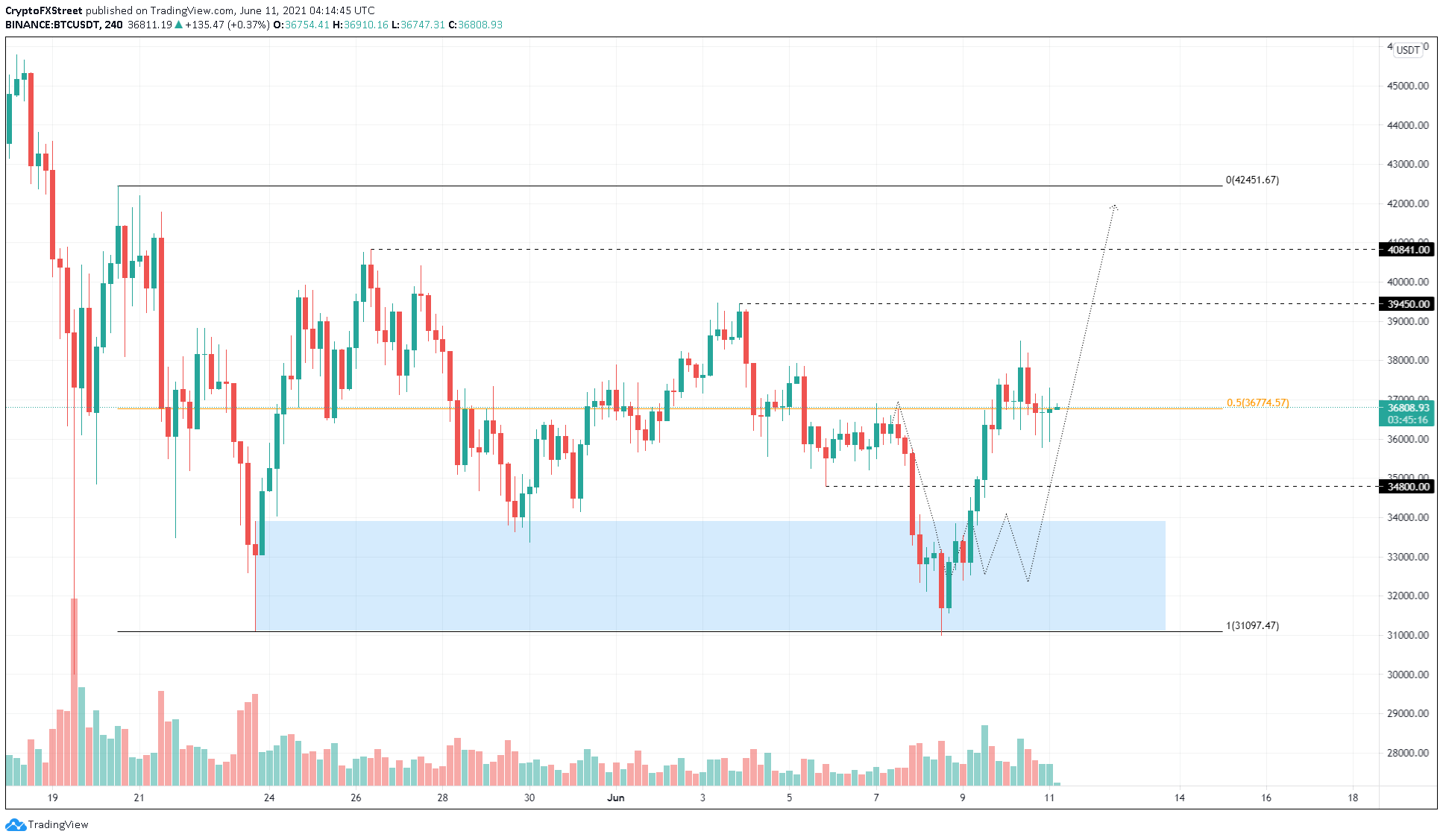 Despite the bullish outlook portrayed by the technicals, on-chain metrics have remained bearish. The on-chain volume for BTC has dropped from a peak of 126.35 billion BTC in mid-May to 33.6 billion BTC in the second week of June.

This 73% decline suggests that investors are fleeing from the Bitcoin network and might be reallocating their funds or booking profits.

Although the supply of BTC on exchanges dropped from 2.69 million BTC in mid-May to 2.58 million BTC on June 7, a reversal seems to be taking place.

From Jun 7 to date, 20,000 BTC have entered centralized entities, suggesting a potential sell-off might be on its way.

Adding credence to the above metric’s bearish outlook is the all exchanges netflow metric, which showed that 15,460 BTC flowed to crypto exchanges on June 10.

Moreover, the Bitcoin funding rate is barely climbing out of the negative zone, suggesting that investors are still expecting Bitcoin price to head lower, painting their bearish outlook.

At the moment,Bitcoin price finds itself in limbo. Despite eyeing a climb to $42,000, the bearishness does not seem to elude the flagship cryptocurrency. BTC looks poised to rally in the short term, but the threat of a downside still looms.

If BTC corrects prematurely, shattering the range low at $31,097, the bullish thesis will face invalidation. In such a case, Bitcoin price might tag the swing low set up on May 19 at $30,000.