Bitcoin price saw a brief setback after failing to slice through a local swing high. Due to the tight-knit crypto markets, Ethereum and Ripple followed suit. However, this weakness in buyers appears to have been a temporary pause as markets look ready to rally.

After the announcement during the Bitcoin 2021 conference in Miami on Monday, the Salvadoran legislature passed the bill making Bitcoin legal tender in El Salvador.

The proposed policy was ratified with a supermajority, gaining 62 votes out of 84 earlier today.

The bill will mandate that all businesses accept BTC as payment, with the government acting as a backstop to the highly volatile nature of the flagship cryptocurrency.

President Nayib Bukele provided details on the backstop during a conversation on Twitter Spaces hosted by Nic Carter of Coinmetrics. Bukele added that a trust fund by El Salvador's development bank would hold $150 million US dollars.

Bukele further added that the development bank’s trust fund would be open to holding BTC in the future.

Advisor to the President of Colombia, Jehudi Castro, showed his support for Bitcoin as he retaliated against Peter Schiff’s comments.

Short it and stop talking.

A similar development was seen further south as a congressman in Brazil changed his Twitter profile picture to laser eyes, showing his support to Bitcoin.

Amidst this drumbeat of acceptance, Bitcoin price readies to head higher as buyers resurface. Although BTC dipped into the demand zone ranging from $31,111 to $33,900, the recent uptick has cleared the upper limit. A decisive close above this barrier will confirm the start of a new uptrend.

In that case, investors can expect BTC to start climbing toward the 50% Fibonacci retracement level at $36,774, which is the first significant resistance level.

Breaching past this barrier will indicate the bulls’ intentions and might propel BTC to $39,450 or $40,841. In a highly bullish case, Bitcoin price might even tag the swing high at $42,451. 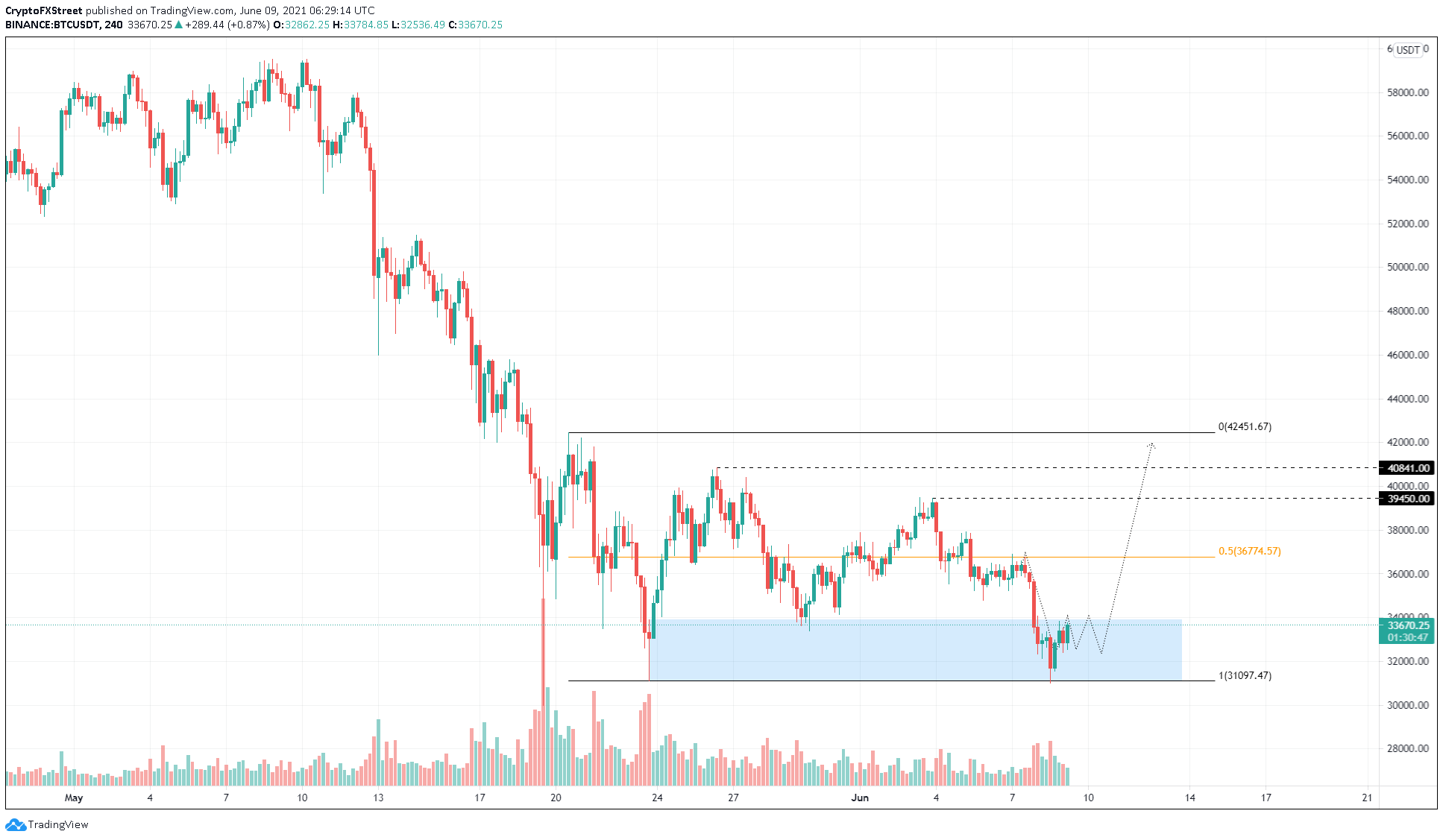 However, if the buyers fall short, pushing Bitcoin price below $31,097, the bullish thesis would face invalidation. In that case, BTC could slide to $30,000.

Ethereum price followed BTC’s path as it failed to rally after the initial bounce. However, ETH is currently testing the immediate resistance level at $2,552; breaching it would allow the buyers to lift the token upward by 11% to $2,847.

The primary reason for the bullishness seems to stem from the fact that El Salvador’s legislature considers Bitcoin as money. Therefore, the crypto market in general will see an uptick in prices as the US markets wake up in a couple of hours.

Therefore, in a bullish scenario, Ethereum price might even tag the range high at $2,910 or sweep the swing high at $2,990. 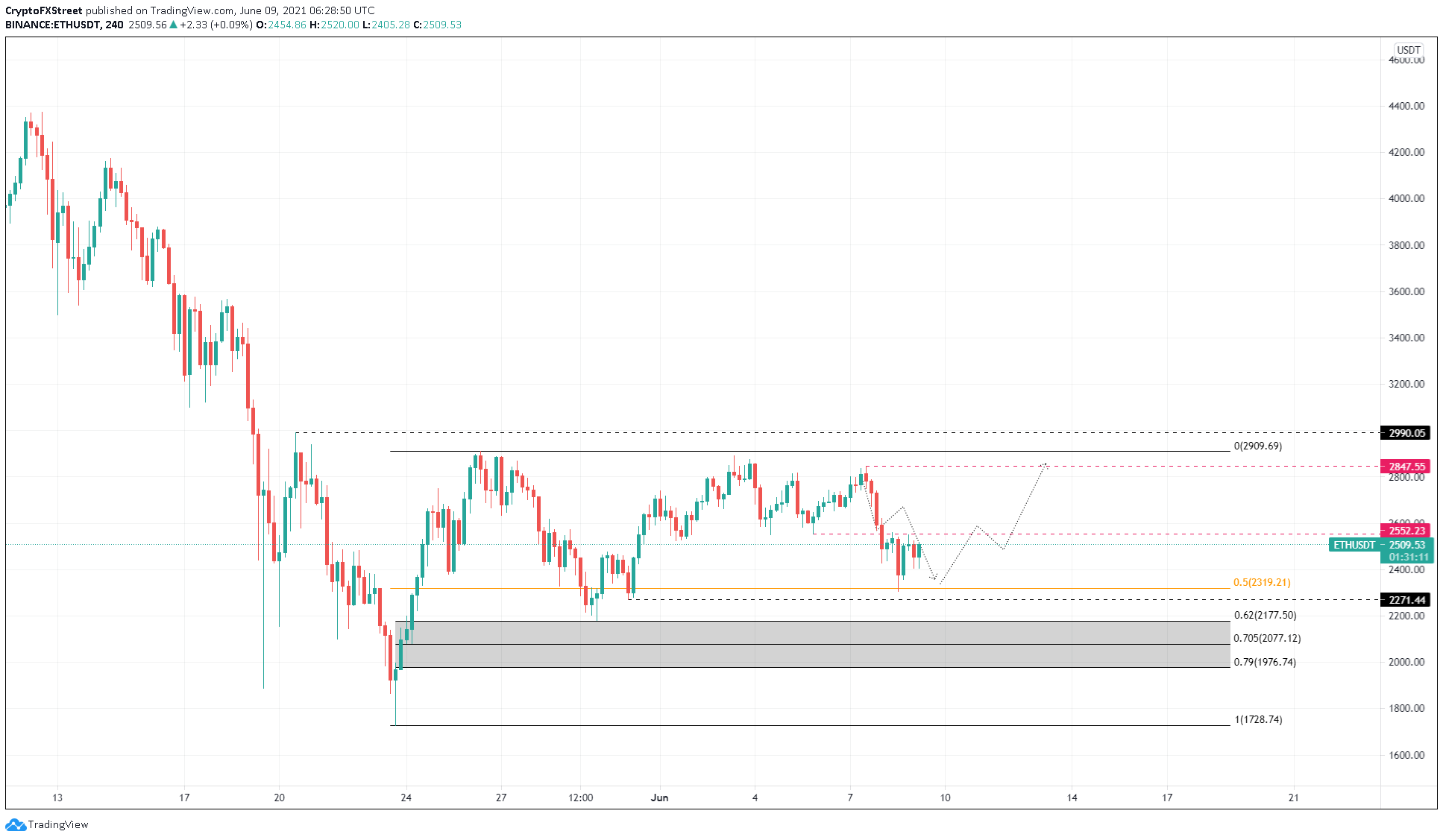 On the flip side, if Ethereum price manages to close below the 50% Fibonacci retracement at $2,319, it would signal waning buying pressure. In such a situation, if the sellers work to produce a decisive close below the support level at $2,271, a bearish outlook will evolve for ETH.

Under these conditions, ETH might drop to the 62% Fibonacci retracement level at $2,177 or the subsequent support level at $2,077.

Therefore, investors should expect XRP price to topple the 50% Fibonacci retracement level at $0.877, which would mark the start of an uptrend. If this were to happen, Ripple could surge 10% to tag the resistance barrier at $0.969.

The subsequent demand zone, extending from $0.986 to $1.05, will provide stiff competition to the buyers, but clearing this would be uber bullish for the remittance token, allowing it to test the range high at $1.103. 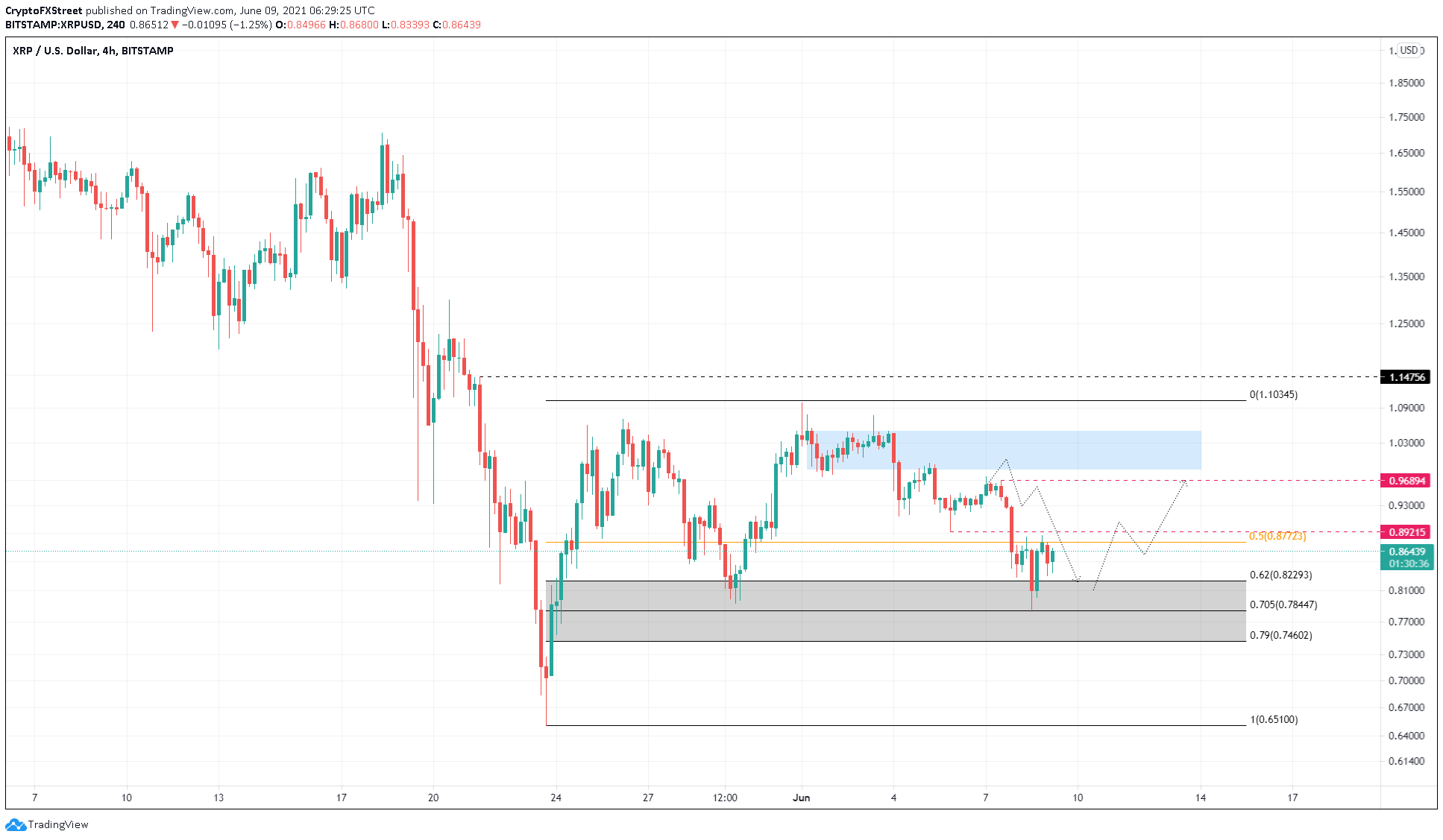 Regardless of the bullishness, a potential spike in bearish pressure that keeps XRP price below $0.877 will signal the inability of the buyers to cope. Such a move might push Ripple to $0.823 and $0.784, respectively.

A decisive breakdown of the 79% Fibonacci retracement level at $0.746 will invalidate the bullish outlook and push XRP price to the swing low at $0.651.