Bitcoin (BTC) could see a price drop to as low as $40,000 if higher support levels fail to hold, an industry CEO says.

Speaking to Bloomberg on May 11, Pankaj Balani, the CEO of digital asset derivatives exchange Delta Exchange, warned that there is a danger of fresh significant losses for BTC/USD.

Bitcoin shed around 5% overnight on Monday, the latest in a familiar cycle of dips and rebounds below crucial resistance which begins at around $59,500.

At the time of writing, the largest cryptocurrency traded at just above $55,000.

For Balani, $50,000 now forms a significant line in the sand for bulls, and a failure to hold it would open up a new lower trading corridor with a floor at $40,000.

Cryptocurrencies in general, he added, "should move lower" under such a scenario. 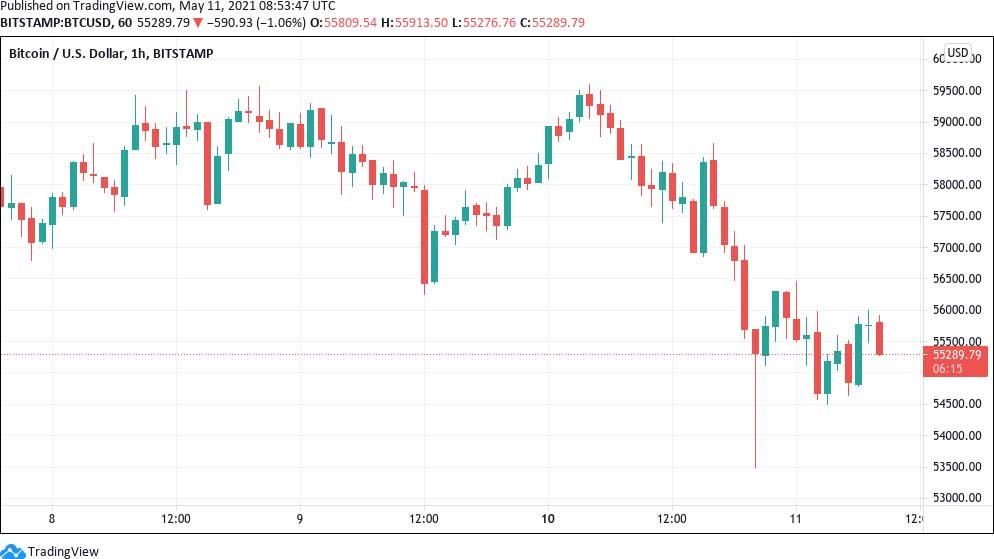 The perspective jars with the more optimistic projections from data-based analytics this week. As Cointelgraph reported, whale buying was previously tipped to keep BTC/USD at a minimum of $52,000.

A major cluster of support from whales — 120,000 BTC at $58,000 — nonetheless failed to stop short-term losses, leaving a question mark over the ability of smaller clusters lower down to do likewise.

Cointelegraph additionally noted that exchange order book support only begins at $50,000, with few bids between that boundary and all-time highs of $64,500.

Altcoins come down from highs

Reacting to the latest price action, however, popular commentators were as cool as ever, noting the overall volatility of the market was very much acting within defined contours.

On altcoins, a sense of a reset being underway was apparent on the day, with Ether (ETH) taking a breather after hitting new all-time highs repeatedly in recent days.

Fresh Twitter action from Elon Musk, CEO of Tesla and SpaceX, had the potential to release a new spate of growth for Dogecoin (DOGE), which had paired almost a week of gains to drop to around $0.50.